Turbo is the muscle of Leader-1's team. He's always spoilin' for a fight and doesn't waste any opportunity to give the Renegades a face full of laser beams. But his headstrong attitude often lands him in a heap of trouble.

Their similar alternate modes lead to a rivalry between himself and Crasher. 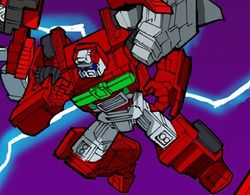 Turbo encountered Optimus Prime and the Autobot Spy Changers after they arrived in his universal strata. The naturally suspicious Turbo assumed they were Renegades and started a battle. The other Guardians joined in and, when the Renegades arrived and helped the Spy Changers escape, Turbo's assumptions seemed verified. After Scooter and A.J. talked to their one captive, Silverstreak, he convinced them the Autobots were good guys, and soon the two teams of heroes joined forces against Cy-Kill and his new Moebius effect that threatened the Spy Changers' home strata. Brain Problem Situation

Sideways and Gong began playing with universal streams, causing elements of the GoBots and their history to merge with a Transformers universe during the latter's first encounter with Unicron. As a result, Jazz and Cliffjumper were intermittently replaced by Turbo and Night Ranger aboard Moonbase One during Unicron's approach to Cybertron. Echoes and Fragments 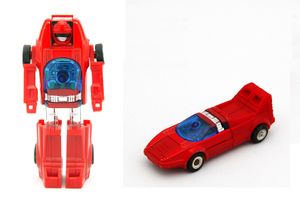 The final toy in the original six figure lineup, Racer Man was released by Bandai Australia during the second quarter of 1983. He remained identical to the original Supercar Robo figure, albeit packaged on a blue backing card.

A carded repackage of Supercar Robo featuring a new starfield-style background, Car was released by Bandai Europe during the latter half of 1983. The figure was later re-released as part of the second wave on a blue backing card.

Produced by Monogram, this model kit featured a pull-back motor in car mode. Turbo's robot mode and conversion pattern were altered for this kit, with the resulting kit resembling Windcharger.