The Guardians must contend with the monster Zod when the Renegades attack the Arctic island of Stolbovoy to obtain the energy source sorium. 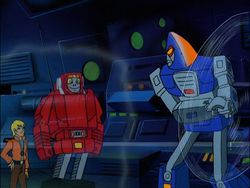 Scooter and Nick are helpless before the hurricane winds Cop-Tur whips up with his rotors, until the plucky little Guardian is able to confuse their attacker with hologram duplicates of himself and Nick. With Nick riding Scooter's vehicle form, the pair zip past the confused Renegade, causing him to lose his grip on his rotor, which goes flying through the lab and covers Scooter and Nick's escape with the destruction it causes. The cackling Crasher hounds them though the hallways outside the lab, but they get away by crashing through a window. Cop-Tur is eager to give chase, but Cy-Kill will not permit it, wishing to keep the Renegades' presence a secret. 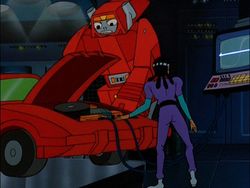 Zooming back toward the Command Center at well over the speed limit, Scooter and Nick attract the attention of a pair of police officers... so Scooter simply converts to robot mode and flies off into the sky with Nick on his back, leaving the dumbstruck officers vowing to one another that they won't report what they have just seen! They are back at the Command Center in no time, and share what they have learned with their comrades; Matt is insistent on dealing with the danger posed by Doctor Braxis immediately, but Leader-1 considers Turbo's repairs more important. The two GoBots get to work fixing up their friend, in a tense operation that nearly goes wrong when Turbo's energy gauge drops to dangerous levels before Scooter jumpstarts it. Once repairs are complete, some emotional support from A.J. sees Turbo through a short recovery period, and he is in fighting shape again in no time. Unfortunately, during Turbo's operation, the impatient Matt storms off to a nearby phonebooth to contact General Newcastle and warn him about Braxis—but Braxis has already blamed the destruction of his lab on Matt and the kids, and Matt's seemingly-insane claims that the doctor is conspiring with alien robots only force Newcastle to send a security team out to apprehend him. Turbo and A.J. swoop in to whisk Matt to safety, and the speeding GoBot easily ditches the police pursuers. 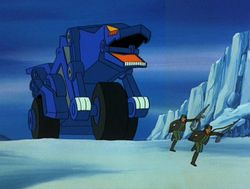 WHERE IS YOUR ZOD NOW?

Beneath the surface of the ocean, away from prying human eyes, the Renegade Thruster heads for the Arctic research lab identified by Braxis as the location of the sorium crystal Cy-Kill seeks. Cy-Kill uses the journey to check up on the battle still raging on GoBotron, and has Fitor teleported in from their homeworld via Astrobeam to provide an update. The news is not good; Fitor again requests that he be allowed to unleash Zod, but Cy-Kill again refuses, and instructs Fitor to launch Zod to Earth for use in his plan. Fitor oversteps his bounds when he angrily responds that "his forces" will be crushed without Zod, resulting in a furious Cy-Kill blasting him and beaming him back to GoBotron, where he carries out his orders.

Once Turbo, A.J., and Matt have returned to the Command Center, the Guardians tap into human phone lines to access government computers and learn more about the "sorium" Nick and Scooter overheard Braxis telling the Renegades about. Discovering that it is an explosively-unstable synthetic energy crystal developed by Eastern Bloc scientist Anya Turgenova, the heroes quickly head for her research lab on Stolbovoy Island. Sadly, Zod gets there first, streaking down out of the sky like a meteor, his impact drawing out all the laboratory's guards and leaving Turgenova and her sorium unprotected. Cy-Kill, Crasher, and Cop-Tur easily saunter into the lab, capture Turgenova, and steal the sorium, which Cy-Kill then uses a small piece of to destroy the lab, covering their tracks. 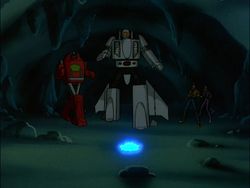 Presently, the Guardians arrive, and a firefight between the two factions ensues during which Turgenova manages to escape. As she runs across the tundra, however, Crasher spots her and snatches her up, stuffing the human into her cockpit to serve as deterrent for Guardian fire. But Crasher has failed to reckon with friendly fire, as a stray blast from Thruster triggers an avalanche that buries the Renegade madwoman with Turgenova still inside her. Just then, Zod crests the horizon and unleashes his mighty flame breath on Leader-1 and Turbo, who take cover in a nearby mountain cave with Matt and A.J. while Scooter and Nick try to get the Command Center to safety, only for it to wind up falling through an ice field into the ocean. With his enemies cornered, Cy-Kill tosses another piece of sorium into the cave and has Zod collapse the entrance, trapping the Guardians and their human allies with the unstable hunk of crystal. With time against him, Cy-Kill is reluctantly forced to leave the buried Crasher behind; he and Cop-Tur take off in Thruster while Zod dives into the ocean... as the sorium detonates and blows the entire mountain apart! 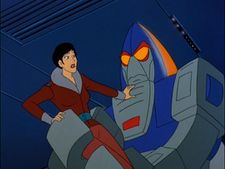 "You're wrecking my laboratory!"
"Ha-ha-haaaa, I liiiike it!"

"I wonder if I could start working the day shift." 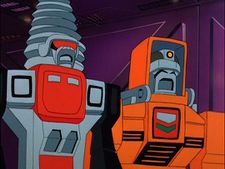 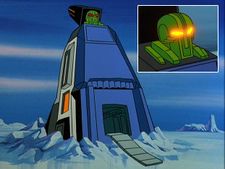