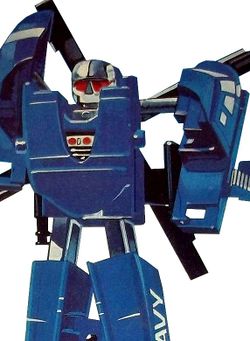 Flip Top is a Guardian. A tenacious fighter, he has a fierce rivalry with Cop-Tur, who may or may not be aware of this.

Along with Hans-Cuff and Blaster, Flip Top was assigned to guard the large number of captured Renegades on Gobotron's Prison Moon. The trio collected Cy-Kill for collection by the Command Center but the Renegade surprised them by throwing one of his wheels at Blaster. His fellow Guardian accidentally fired a missile into the corridor roof, with Blaster and Flip Top both being badly damaged by the falling debris. They were found shortly afterwards by Path Finder, Small Foot and A.J., allowing Rest-Q to transport them back to the Command Center, where Flip Top was placed in a repair bay.Cy-Kill's Escape The ship then travelled to Antares III on a search for the Last Engineer and after contact was lost with Leader-1 and Matt a recovered Flip Top and Blaster helped search for the pair, joining Path Finder and Scooter in battling the mutants Vamp and Scorp and helping free the captives. He was then present when Scooter awakened the purported Last Engineer - who later revealed himself to be the Master Renegade, holding Small Foot hostage and preventing the other Guardians from intervening.Quest for the Creator While Crasher came across to collect the Master Renegade some opportunism from Turbo meant the Guardians avoided destruction and were able to return to GoBotron and warn the Guardian Council. The Fall of GoBotron Flip Top was later captured by the Renegades and detained on a damaged Command Center, awaiting disassembly at the Prison Moon. However, Scooter and Sparky were able to trick the Renegade guards into abandoning ship and opened the cells. Along with Turbo, Blaster and Van Guard he stormed the bridge - only to find it was the Guardians who had freed them. Turbo then set course for Earth. Flight to Earth Turbo was able to land the Command Center with help from Leader-1 and the Guardians planned to fight back with the new Power Suits. The plan worked and Flip Top watched as Zeemon congratulated Leader-1 and his crew. Return to GoBotron 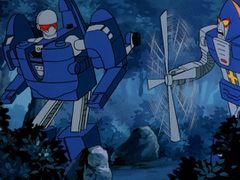 A doppelganger of Flip Top was seen among the duplicates Cy-Kill used to replace the Guardians, indicating the real Flip Top was captured as well. Doppelganger Flip Top was assigned to Earth when Cy-Kill struck up an alliance with the crime kingpin Murchison, using a forcefield generator to take over Washington, D.C.. The resulting attack overwhelmed the military and left Leader-1 and Turbo out of commission, while Matt was captured after an unsuccessful infiltration attempt. Flip Top took A.J and Nick to see the situation and they spotted the captive Matt, with the Guardian helicopter able to move in and rescue their ally. The group then targeted the shield generator itself. While Matt sneaked in to deactivate it Flip Top stood guard until he was found by Cop-Tur; as the Renegade was protected by a forcefield Flip Top could do little other than keep his rival busy to start off with. However, Matt was able to deactivate the shields in time for Flip Top to punch Cop-Tur out. He later helped the resulting Guardian/UNECOM counter attack by using his cables to grab Cy-Kill and Crasher before dumping the pair in the Potomac. Crime Wave He later helped the Command Center team destroy a shower of meteorites heading towards Earth and was later assigned to escort freighter ships off Micronesia in an attempt to find the Renegades' new Starfish base. Flip Top was assigned to guard the SS Vega but was drawn away from the ship by the Renegade Water Walk, allowing. However, Flip Top was part of the trap the Guardians devised to infiltrate the undersea base, turning the tables on Water Walk and leading him on a wild goose chase around the area and allowing the Guardians to rescue the captives from the Starfish before helping a naval taskforce capture the base.Depth Charge

Flip Top was part of the Guardians' Earth Force, based permanently on the planet, and helped chase away the Enemy Invaders when they threatened an injured Turbo. The Monsters and Mister Grogan Later he was injured along with Night Ranger and Road Ranger after they were ambushed by Scorp. Captain Clegg's Dream He later controlled one of the leg units of the new Battle Suit during a battle with Zod in Russia, eventually securing the release of the captured humans Anya Turgenova and Boris Bulkanikov. The Capture of Comrade Boris Later he and Good Knight joined in the battle against a huge Renegade army gathered at Mauna Mauna by Cy-Kill. The Battle at the End of the Earth

During the Diaspora, Flip Top was dispatched to Level 63 along with an assortment of Guardians and Renegades. Cultural Appropriation

Flip Top was one of the Go-Bots that joined Leader-1's army to face the Renegade uprising. Issue 2 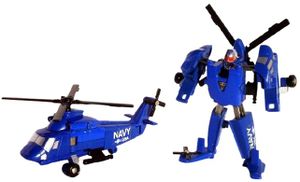 Flip Top was released by Tonka in the second series of GoBots, and converts from robot to Kaman SH-2 Seasprite military helicopter in 7 steps. The toy was a repackaging of Kaman Robo from Machine Robo, with no significant changes but omitting the extra sticker sheet of the Japanese release. Flip Top's robot mode has decent articulation in the shoulders and hips. While his rotor can be removed it doesn't need to be for his transformation, and despite his hands having holes machined in them he can't brandish it as a weapon. Being made of soft black plastic the rotors are more durable than those of some other GoBots helicopters.

Flip Top was released in a gift pack with Turbo and Leader-1. All three toys were unchanged from their original releases. 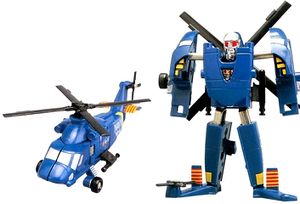 The European version of Flip Top was unchanged from the Japanese release. 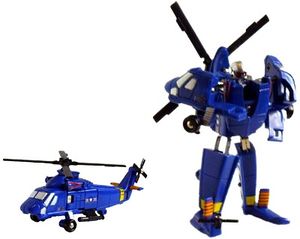 The figure was reissued by Bandai in Europe during 1993 as part of the third series of Robo Machines, with the 'US Navy' stickers updated to say 'RM Navy'. For trademark reasons the figure was renamed simply Helicopter II (Wrong Way was Helicopter I) in the British market, with localised versions of the name used in other markets. Sadly, like most of the Robo Machines figures Helicopter II uses poor quality materials and suffers from mould degradation. Good source if you've lost the rotor, though.