Six Heads are Better than One One Born Every Minute

During the Decepticon attack on Guardian City on Earth, Leader-1 arrived from Cybertron with reinforcements. Using the Power Suits, Dozer, Scratch, Bolt, and Staks joined the battle. They formed Courageous and engaged Devastator in defense of the headquarters. Echoes and Fragments 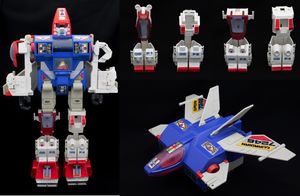