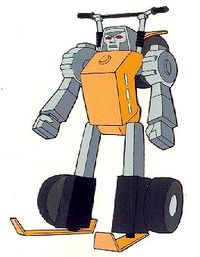 Mr. Moto is a Guardian, whose love of Japanese influences sometimes leads to him being called Moto-san.

Moto-san was a member of the Guardians in the aftermath of the first Renegade Revolt. As GoBotron was coming under regular attack from Parthian raiders, High Protector Zeemon planned an assault on their home planet, and Moto-san was one of the troops he took to Parthis. Initially they were unable to locate any sign of the Parthian bases but when over a large stretch of desert several of the raiders' gun turrets emerged from under the sand. Moto-san was shot down but was able to convert and return to his Command Center after Zeemon ordered a retreat."Et Tu, Cy-Kill"

During the Diaspora, "Motosan" was dispatched to Level 77 along with an assortment of Guardians and evil Rock Lords. Cultural Appropriation

"Mr. Moto" later returned to his home planet. He was getting beaten up by Crasher shortly before the Cataclysm threatening their universe was finally ended. Last Sunset

Motosan helped Leader-1 and Turbo drive off Cy-Kill when he attempted to use Indoctrination Chips on the candidates for President of the United States. Cy-Kill For President Motosan and Pumper were among the Guardians mesmerized by Doctor Braxis and his Destabilizer Cannon upgrades for the Guardians. Once Braxis Twice Shy Part 2

Sideways and Gong attempted to have some fun by mingling a universal stream of GoBots with a universal stream of Transformers during the events leading to their first encounter with Unicron. As a result, after the battle of Autobot / Guardian City on Earth, the two heroic factions found themselves seamlessly integrated while carrying out a version of the Transformers' history. Motosan and Bullseye assumed the places of Perceptor and Blurr as the new commander Major Mo led them, Springer, Arcee, Nick Burns, and A.J. Foster in fleeing Galvatron's strike force. After an emergency separation of their Command Center, the heroes crash landed on the planet of rock, Quartex, where they encountered Galvatron's forces again as well as a group of Rock Lords. Echoes and Fragments

Mr. Moto was one of the Go-Bots that joined Leader-1's army to face the Renegade uprising. Issue 2 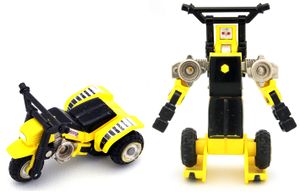 Mr. Moto was released by Tonka in the third series of GoBots, and converts from robot to Honda 200X ATC. Initially designed by Bandai for the Machine Robo line, the figure went unreleased until the prototype was used by Tonka. As such the figure was never released in Japan, while it was also skipped for the European Robo Machine line. The ankles of the figure wear easily, meaning loose examples often have difficulty standing. Mr Moto's shoulders and elbows can move a bit, but not much. Overall he has some very odd proportions, rounded off by a face only slightly larger than the readership of Renegade Rhetoric.