GoBots Magazine was a quarterly A4-sized magazine published by Telepictures under licence from Tonka. It ran for five issues between 1986 and 1987. 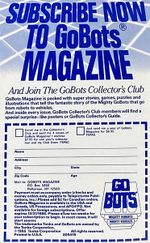 The title was as close as American kids would get to a GoBots comic to match the Transformers series Marvel were putting out. However, there was a gulf in terms of both quality and quantity. As well as only coming out every three months the magazine only featured a single 5-page GoBots strip, a painted poster (a detail of which was used for the covers) and the occasional "Ask Leader-1" feature, the rest being filled with file articles about science, computing and space. And GoBots Magazine was mail-order only; leaflets promoting the title were packed in some later large figures. The first issue only came out in early 1986 and by the time of the fifth issue the toyline had finished and subscribers got a cover letter informing them their orders would be transferred to The Kids Official Statue of Liberty Magazine as GoBots Magazine had ended. Published at the start of 1987, it was very likely the last piece of GoBots media before IDW's 2018 series. The strips broadly followed the Challenge of the GoBots cartoon continuity, mainly using its' character models. The adventures were so slight and inconsequential - even by GoBots standards - that they could easily have followed on from the series and movie. There were some crumbs of interest, however - another crossover with the Rock Lords in the fourth issue, who then got their own one-page strip in the final issue, while "A Spy Among Us" featured the only media appearances of Super Couper and Clutch. 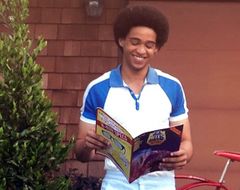