GoBots is a toyline and media franchise created by Tonka, which ran from 1983 to 1986[1]. The primary rival of The Transformers in the toy aisles of the mid-1980s, the line consisted largely of figures that Tonka had licensed from Bandai's Japanese Machine Robo series, given new identities, and promoted through an animated television series. Following Hasbro's acquisition of Tonka in 1991, GoBots became the company's intellectual property, and characters and elements from it have appeared in some limited capacity in various pieces of Transformers media. 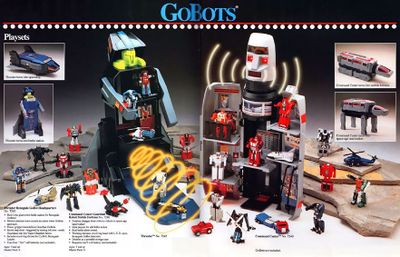 The original Machine Robo toys were created by Japanese toy manufacturer Popy and released in 1982: a dozen small (two to three inches in height) robots who could transform through simple multi-step processes into vehicle modes, some based on modern Earth vehicles, others on more "alien" conveyances. The success of the line saw it continued into 1983, expanding to include larger "Machine Robo DX" figures. Also in 1983, Popy was reincorporated into its parent company, Bandai, who elected to take Machine Robo global. The series was exported to Europe (as Robo Machine), Australia (as Machine Men) and to America (as Machine Men) — but while the European and Australian releases met with success, the American series failed to take hold.

1983 also saw the beginnings of Hasbro's partnership with Japanese toy company Takara to release their Diaclone and Micro Change toys in Hasbro markets as The Transformers. Rival toy company Tonka did the same, licensing the Machine Robo toys and developing new names and identities for them as the "GoBots" — a race of beings from the planet GoBotron who had "evolved" into machine lifeforms as they replaced their worn out organic bodies with mechanical parts. Released at the tail end of 1983 with a $2.5 million ad campaign devised by agency Jordan, Case & McGrath, the GoBots toyline was a success and continued into 1984, with more Machine Robo toys being imported by Tonka to expand the series, along with a handful of newly-created larger figures and playsets.

GoBots began winding down in 1986, with a hodge-podge of remaining Machine Robo toys and figures culled from other sources comprising the final additions to the toyline. Though this marked the end of GoBots in the United States, Machine Robo carried on in Japan, with a new animated series, Revenge of Cronos being released in mid-1986, followed by a sequel, Battle Hackers, in 1987. Robo Machine continued its success in Europe, to the point that Revenge of Cronos was imported to France and dubbed as Revenge of the GoBots, an ostensible sequel to the Challenge of the GoBots cartoon. 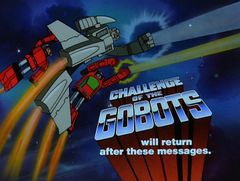 Main article: Challenge of the GoBots

It was in 1984 that the big media push for the line began, with Challenge of the GoBots, a five-part animated television mini-series produced by Hanna-Barbera airing in September. The cartoon featured the majority of the 1983-1984 product line, and established two trios—Leader-1, commander of the friendly Guardian GoBots, along with Turbo and Scooter, and Cy-Kill, evil lord of the Renegade GoBots, and his minions Crasher and Cop-Tur—as the "leading players" of the franchise around whom most stories would revolve. A full series of sixty additional episodes was commissioned and began airing in 1985, even as the GoBots toyline continued to swell. 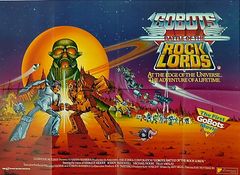 A theatrical movie, GoBots: Battle of the Rock Lords, was released in March 1986, serving largely to set up Tonka's new spin-off toyline, Rock Lords; a second season of the Challenge of the GoBots cartoon was not produced. The last few figures limped over the finish line in early 1987, and the line was cancelled with a handful of toys unreleased.

A quarterly mail-order magazine based on GoBots was released by Telepictures, each issue featuring a five-page comic strip and a stack of unrelated articles about anything vaguely robot/space related. It ran for five issues, from 1986 to 1987. 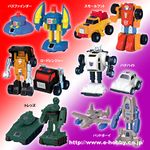