From GoBots Wiki
(Redirected from Transformers: Timelines)
Jump to navigationJump to search 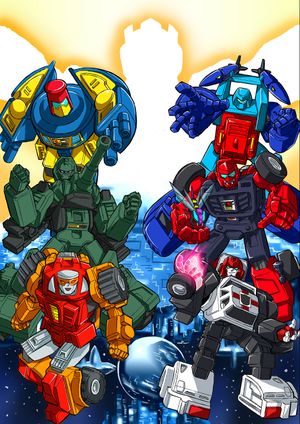 Path Finder, Treds, Small Foot, Man-O-War, BuggyMan, and Rest-Q in the Cybertronian-style bodies they adopted to blend in amongst the Transformers.

Transformers Timelines is the overarching name for the various series of Transformers toys, comics, and prose stories released by Fun Publications through the official Transformers convention BotCon, and the Transformers Collectors' Club. Select stories from various series released under the Timelines banner chart the tale of one of the company's primary GoBots continuities, which follows the adventures of the Mighty Robots as they flee their home universe in the face of the Cataclysm that threatens to destroy their entire dimension, and wind up scattered across the Transformers multiverse. This continuity is one of two Fun Publications GoBots stories that spins off after the events of the Challenge of the GoBots cartoon, the other being "Renegade Rhetoric". 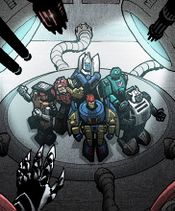 Bug Bite and the other "G1 Gobots" arrive in Axiom Nexus.

Fun Publications made their overture into GoBots fiction with the release of the BotCon 2007 exclusive toy set, "Games of Deception," which included a figure of Bug Bite—a white redeco of the 2006 Transformers: Classics Bumblebee, inspired by the "G1 Gobots" set released by e-HOBBY in 2004. The comic book that accompanied this set revealed that Bug Bite was from another universe, and had traveled into the Transformers' world to search for the source of a mysterious Cataclysm that was was on the verge of obliterating his home dimension, but stopped short of explicitly mentioning the GoBots.

The cagey approach of "Games of Deception" was dropped in 2008 with the release of Greg Sepelak and Trent Troop's Transformers: TransTech prose story "Withered Hope" through the Transformers Collectors' Club website. This story took place prior to "Games of Deception", and explained how the Guardians and Renegades had allied to seek a solution to the Cataclysm. The entire group of "G1 Gobots", including Bug Bite—in accordance with the toy bio that identified them as a "Dimensional Exploration/Experimentation Team"—were sent across the dimensions to investigate the source of the catastrophe. Mid-transit, the group was jolted off course and wound up in the city of Axiom Nexus on the planet Cybertron, home of the TransTech Transformers, and had to navigate its dangers before they could escape to their target universe, to which Bug Bite had already beaten the rest of his team.

Vamp and Bladez, in their new Cybertronian forms, attack Stiletto.

The Cataclysm plot thread dangled for many years until 2016, when writer Jim Sorenson—responsible for the heavy GoBots content of Fun Publications' "Ask Vector Prime" and "Renegade Rhetoric" features—readdressed the subject in his series of Beast Wars: Uprising prose stories. Following up on an earlier intimation in "Ask Vector Prime", these stories revealed that the Monster GoBots had also relocated to another dimension to escape the Cataclysm, where they became embroiled in the uprising of the native Maximals and Predacons against their Builder masters. In particular, coded messages in "Cultural Appropriation" provided a list of every known GoBot and the dimension to which they fled.

Finally, also in 2016, writer Andrew Hall crafted a conclusion to the Cataclysm plot in the four-part Spatiotemporal Challengers prose story, which saw a team of reinforcements join the G1 GoBots in the evil Transformers mirror universe of "Shattered Glass."