From GoBots Wiki
(Redirected from Machine Robo: Revenge of Cronos)
Jump to navigationJump to search 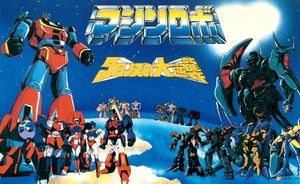 It featured the first Machine Robo anime; as such the line was a reversal in direction for the Machine Robo franchise, which had seemed to be winding down over the previous year. This was likely at least in part in response to Takara's successful import of the Transformers brand to Japan in 1985 as well as the general explosion of toy-based cartoons in the mid-1980s. 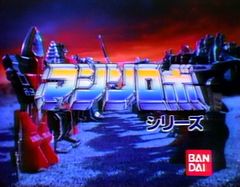 The series was backed by a branded toyline featuring toys of most of the major characters. Surprisingly - or perhaps not - considering the outlay on the anime series the line consisted of a mixture of reissued Machine Robo figures and retoolings of toys from other sources which Bandai had access to, notably Chogokin. A few were exclusive to the Revenge of Cronos line, but whether they were purposefully designed for it or unused designs from either the previous incarnation of Machine Robo or another line is currently unknown.

A notable assortment was the Rock Robo, issued in the West as the Rock Lords; it is currently unknown whether they were initially designed for Rock Lords and then imported or vice versa. 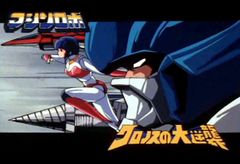 A possibly apocryphal[1] story states that Bandai initially tried to do the same as Takara and simply import the American series, but that a test screening went so badly that this plan was scrapped after only a single episode had been dubbed.

Whatever the reason, Bandai decided to commission a fresh series from Ashi Productions, who they had recently worked with on Dancouga. The initial proposal was created in February 1986 for Machine Robo TI: Shinsei Kaiden, about a military-style army of Machine Robo fighting the Grendos army in the Latour system, with human allies. This would change considerably through development, though elements of it would later be revived for Machine Robo: Battle Hackers. Instead Machine Robo: Revenge of Cronos ignored the extant Machine Robo mythos and instead placed the robots as the sentient inhabitants of the planet Cronos, under attack from the villainous Gyandlar, who are searching for the Hyribead energy source. It initially told the story of a wandering band of heroes made up of Rom Stol (who could change into Kenryū and Baikanfu, as per the largest toy in the line), his sister Leina, Blue Jet, Rod Drill and Triple Jim travelling from settlement to settlement on Cronos, searching for Wolf Emblems while foiling various plans of the Gyandlar to kill them or learn the secret of the symbols themselves. Midway through the series this focus changed considerably; the show gained a semi-regular setting in the shape of the city of Emerald City, the plot was made more solidly arc-based and a wider variety of toy-based characters appeared.

The series ran on the TV Tokyo network from 3rd July 1986 to 28th May 1987. 44 episodes were made; the last three were clip shows, following which it was immediately replaced by Machine Robo: Battle Hackers.

The cartoon series ended with the regulars and assorted friends crossing a dimensional gate, at which point the cartoon's universe branched. A selection of characters were 'reborn' with no memories as the population of M1 in the Battle Hackers series. However, the Stol siblings and the star characters were span off into an OVA series mainly focusing on Leina Stol. These bore very little resemblance to Machine Robo but do - sadly - continue the Revenge of Cronos storyline.