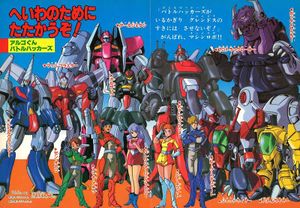 Machine Robo: Battle Hackers (マシンロボ ぶっちぎりバトルハッカーズ Mashin Robo: Batoruhakkāzu) was a Machine Robo franchise from Japan that ran from 1987 to 1988.

It featured the metafranchise's second cartoon series, and was the last to be so supported until 2003's Machine Robo Rescue. In fact, after Battle Hackers the whole Machine Robo franchise shut down for five years. While hard data is difficult to find it can be assumed that Battle Hackers wasn't a roaring success. 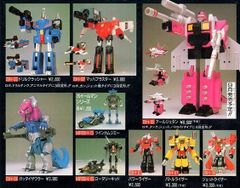 The series was backed by a branded toyline featuring toys of most of the major characters. In a reversal of the previous toyline it mainly consisted of newly-designed figures. All were of heroic characters; no toys of the franchise's villainous Gurendos were ever made, though some extant Gyandlar figures were used in the cartoon.

The largest of these were the Battle Hackers, which had some additional functionality such as third and even fourth modes - though exact size and features varied from figure to figure. They and the Riser Suits featured BB-style launchers, as introduced on the previous year's Pro Truck Racer and Chara DX Collection toys. The line also completed the Wheelmen series began the previous year. For reasons unknown a toy of Garzack was cancelled.

In 1988 the toyline changed tack and became centred on the smaller Winner Robo, which were around the same size as the Machine Robo Series toys but featured spring-loaded transformations. The playset Roboshooter Gaiden was issued to interact with the figures, as was the mail-in Thunderer. This change wasn't enough to save the line either, and it was cancelled with at least one figure - Hilux Winner - unreleased. 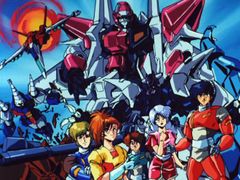 Ashi Productions once again produced a cartoon based on the series, with many of the same artists staying on - including series director Hiroshi Yoshida and head writer Hideki Sonoda. It took place on Electronic Planet B-1 in "406AE". The planet is home to the Machine Robo's Algo Republic but comes under attack from the Gurendos, a gang of invading robots controlled by the computer Dylan and led by Gakurandar. The stars of the series were the titular Battle Hackers, a team of rebellious and wild outcasts led by R. JeTan, who join forces with human astronauts who crash on the planet. While featuring some of the same characters as Machine Robo: Revenge of Cronos they had no memories of that series due to crossing a dimensional gateway. The show had a larger ensemble cast of regulars than its' predecessor and generally took a lighter approach.

The series ran on the TV Tokyo network from 3rd June 1987 (a week after the last episode of Revenge of Cronos aired) to 30th December 1987, in an earlier timeslot than Revenge of Cronos. 31 episodes were made; it seems almost certain that it was prematurely cancelled as Japanese cartoons of the period (and today) run in 'cours' of 12-13 episodes, meaning a series that ran for its' natural length is usually some multiple of these numbers.