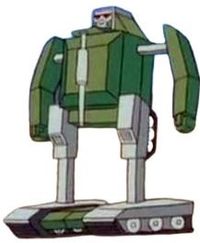 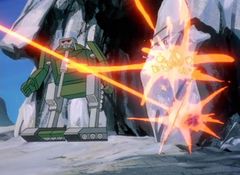 Centuries ago, Treds was active as a member of the Guardians under the three High Protectors: Leader-1, Cy-Kill, and Zeemon. He served under Leader-1 during the Renegades' first revolt, later travelling with him to provide security on the mining planet Garleon. They were attacked by the Renegades Crasher, Cop-Tur and Geeper-Creeper, surviving thanks to the intervention of the miner Turbo. Along with Leader-1 and Turbo, Treds was hailed as a hero on his return to GoBotron - though Leader-1's success drove a further wedge between him and Cy-Kill.

In modern times, Treds remained a Guardian. Along with Leader-1, Turbo and Tri-Trak he gets involved in a fracas with Cy-Kill, Cop-Tur and Crasher, requiring the Command Center and Scooter to bail them out. Later he headed off with Turbo and Leader-1 again to find the source of a strange energy signal."Et Tu, Cy-Kill"

Treds was working out of a UNECOM base with Leader-1's command team when Cy-Kill arrived waiving a white flag. The Renegade overlord proposed a game of basketball, with the loser vowing to leave Earth forever. Leader-1 agreed, and the Guardians began training for the game with the assistance of the Harlem Globetrotters. When the big game began, the Guardians came out to an early lead. Treds took possession and fired the ball out his cannon and into the net from half-court, thereby justifying his inclusion in the episode. Although the Guardians won, the Renegades reneged on the agreement and fled. Double Dribble In the final battle between the Guardians and Renegades over a matter transmuter, Treds arrived with Dozer, Royal-T, and Road Ranger with the Power Suits to form Courageous. Together, the Guardian combiner squared off against Monsterous until Cy-Kill ordered a retreat. One Born Every Minute 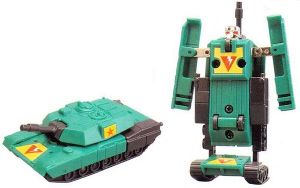 Treds was released by Tonka in the third series of GoBots, and converts from robot to M-1 Abrams tank in six steps. In tank mode his turret can turn and the gun can lift. Treds is the only small GoBot to feature a faction insignia; sadly, the Renegade version was used, despite the card and show depicting him as a Guardian. He's cursed elsewhere too; the head/shoulders, hips and ankles of the figure can easily become loose, making it difficult to stand Treds up in robot mode, especially as he is top-heavy. The figure was not released in Japan or Europe. 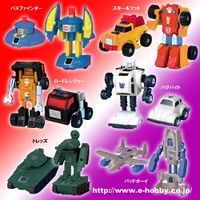 He's the one that actually looks a bit like Treds

Treds is a redeco of the The Transformers Mini Vehicle Warpath, transforming into an M551A1 Sheridan tank as well. He was only available in an e-HOBBY-exclusive Collector's Edition six-pack with Road Ranger, Bug Bite, Path Finder, Bad Boy, and Small Foot. Treds breaks with the rest of the set in two ways - firstly he actually looks a little tiny bit like Treds and secondly his toy is not demonstrably worse than the GoBots toys. He has a Decepticon logo as a reference to the original toy using a Renegade insignia, which is what passes for cleverness in the world of Hirofumi Ichikawa.