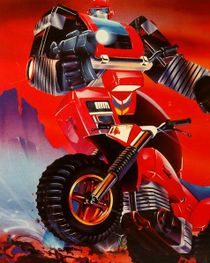 Tri-Trak is a Guardian and one of the Secret Riders. While he has an impetuous streak his combat prowess belies his rotund appearance. He would have lodged a record score at the Guardian Academy's shooting range if not for Renegade sabotage and after graduating he rapidly became a trusted Guardian member.

In contrast to many Guardians, Tri-Trak faced his biggest challenge before even becoming a Guardian. As a cadet at the Guardian Academy his impulsiveness was blamed for the poor performance of Blue Team - which also included Tork, Twister and Staks - in evaluations. On circuit flying around the solar system the Red Team mocked the Blue Team before breaking formation, just as radio signals broke up between the Guardians. Tri-Trak then spotted something unusual on one of Saturn's uninhabited moons and descended to investigate. There they were ambushed by Vamp, Scorp and Creepy. When Creepy webbed up Tork, Tri-Trak flew in to save him, but the pair were soon both caught by the Renegade again. They were saved when the Red Team returned, though Tri-Trak questioned why they still had working radios, and why the Renegades retreated so easily. He almost posted a record score on the shooting gallery section of the test, but this was ruined when a 'friendly' target of Scooter attacked him, despite the fact Guardian targets shouldn't have been able to do so. As a result, his score for the whole course was a single point, making him the only cadet not to graduate. Tri-Trak was already suspicious of the competing Red Team - made up of Re-Volt, Chaos and Traitor and suspected foul play. He discovered they were really Renegades plotting to kidnap Zeemon at the academy graduation ceremony, but was disabled by Traitor before he could report this. Tri-Trak was found by Nick and A.J, and tried to stop the kidnap of Zeemon. While the Guardian politician was captured Tri-Trak led the Blue Team in chasing after the Red Team. While the Dread Launchers were able to briefly escape on a Thruster, Tri-Trak confounded them by flying directly through the craft's windscreen, knocking out the trio of Renegades and allowing their capture at great risk to himself. He recovered enough to be passed from the Academy with personal congratulations from Zeemon, and his fellow Blue Team members were so impressed with his determination they requested to continue working together - Leader-1 acceded, renaming the team as the Secret Riders. Guardian Academy 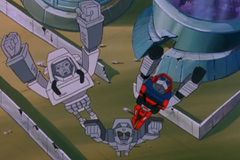 His first active assignment was serving onboard the Command Center with Leader-1 when they received a distress call from the Earth freighter Pilgrim and set off to help. On arrival he headed out on the attack, helping Twister battle Cop-Tur before the Renegades went into retreat. He then helped Twister find a power port on the Pilgrim before its' life support failed. After the Pilgrim was helped back to GoBotron the Guardians came up with a scheme to get the ship past the Renegades and to the colony of New Earth, with Leader-1 taking the colony freighter out as a decoy while Throttle, Tri-Trak and Twister escorted the humans and the Last Engineer on a Command Center. This section of the plan worked but when they arrived on New Earth they were ambushed by the Master Renegade and his minions Vamp, Scorp and Creepy. The three Guardians were restrained under an energy net until Cy-Kill arrived, with a stray blast from the battle freeing them. Tri-Trak then sprang into action, chasing and battling Cy-Kill himself until the Renegade leader called a retreat, leaving the colony safe. and saving the colony. Quest for New Earth

Later he would join Leader-1, Turbo and Treds battling Cy-Kill, this time picking up minor damage in a Renegade ambush. While he was recovering Scooter told him the story of Cy-Kill's defection from the Guardians to the Renegades. "Et Tu, Cy-Kill"

Tri-Trak also appeared in "Et Tu, Cy-Kill" fighting alongside Zeemon and Moto-san during the time of the first Renegade revolt, despite not only already having an established background as a newly-graduated Guardian but also Tri-Trak being the character Scooter is telling the flashback storyline to in the episode. Ooops! 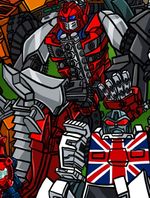 During the Diaspora, Tri-Trak was dispatched to Level 39 along with an assortment of GoBots, including the Secret Riders and Dread Launchers. Cultural Appropriation

A rivalry began to develop between the Secret Riders and the up-and-coming Robo Rebels. Twister and Tork grumbled about the Rebels getting choice assignments, but Tri-Trak tried to remain level-headed and argued that all assignments were important. Unfortunately, the Riders were unable to stop the Renegades from stealing the Macrocosmic Continuum Distorter from the Scientific Moon of GoBotron and, to make matters worse, their call for aid brought none other than the Robo Rebels. Tempers flared between the two groups when the Rebels teased the Riders about their failure. Twister challenged Bent Wing to a race to track down the Renegades, and Tri-Trak was forced to go along to keep an eye on his peers. The two pursuing Command Centers were led into a trap by their Thruster targets, surrounded by nine Thrusters that disabled the ships and brought them aboard Rogue Star. Despite their capture, the Secret Riders and Robo Rebels continued to squabble until Tri-Trak channeled Leader-1 and gave a speech about tolerance, or teamwork, or something. The united Guardians split into two mixed teams to disable the Distorter and repair one of the Command Centers using parts from both. They were successful and escaped Rogue Star having learned a valuable lesson. Probably. Riders and Rebels

Tri-Trak and the Secret Riders were present on Quartex when Boulder, the Guardians, and UNECOM began the tri-planet alliance in opposition to the evils of the universe. Unfortunately, Cy-Kill was also in attendance, and his three combiners Puzzler, Monsterous, and the new Nemesis secured his victory over the forces of good. Combiner Wars Part 1 Still, Matt Hunter managed to rally the Guardians and Rock Lords to press on against Cy-Kill. They used Cy-Kill's own arrogance to turn his allies against him, and the battle began anew. Tri-Trak and the Secret Riders were among the Guardian forces who helped vanquish Cy-Kill and Magmar, seemingly forever. Combiner Wars Part 2

Tri-Trak participated in the second encounter between the GoBots of Strata 22 and the Autobot Spy Changers. When the Renegades tricked the Guardians into leaving Earth, Tri-Trak and Nick Burns were the only ones left behind on the planet after the Renegades established an Embargo Field. They used the Reality Beacon to signal the Spy Changers, summoning Wheeljack and Trailbreaker for aid. Trailbreaker's knowledge of force fields helped them identify the source of the Embargo Field. The field was shut off, and the Renegades vanquished by the returning Guardian forces. Ask Vector Prime, 2015/09/30

As Sideways and Gong played with mixing universal streams, the Decepticons staged an all-out assault on Guardian City on Earth. Tri-Trak and the Secret Riders manned the parapets to fend off their attackers. When Leader-1 fought Megatron to a standstill, Tork and Tri-Trak arrived to help their leader take Megatron into custody. Unfortunately, when Tri-Trak saw Megatron reach for a weapon, he impulsively fired off his hand-blasters, and Megatron deflected the shots into Leader-1. With one more round of fire, both leaders fell to the ground. After the battle was over, the Secret Riders and Robo Rebels attended the bedside of Leader-1 as their commander passed away from his injuries. Tri-Trak blamed himself and stormed out of the recovery room. Tork went to follow, but Throttle cautioned him to leave their friend alone to deal with his grief privately. Echoes and Fragments 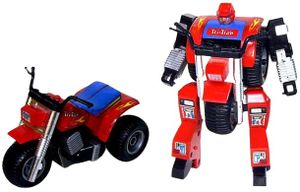 Tri-Trak was released by Tonka in the third series of GoBots, and converts from robot to Honda 200X ATC in 13 steps. The toy was a minor recolour of Moto ATC from Zenmai Kahen Winch Robo, and had previously been released under the name Moto ATC as part of Robo Machine. Unlike the other Secret Riders figures he lacks a winch gimmick. Despite his unusual shape Tri-Trak has some impressive features, notably excellent arm articulation, though his sliding hips require gentle care to avoid the legs snapping off.