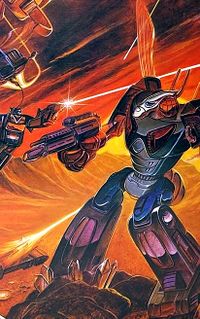 Traitor is a Renegade, one of the Dread Launchers. Buzzing through the skies, Traitor looks for his next victim to sting!

Ironically, he's very good at getting people to trust him. 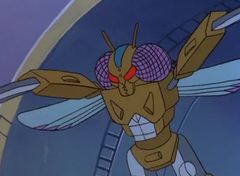 Along with Re-Volt and Chaos, Traitor was sent to masquerade as the Red Team of cadets at the Guardian Academy in order to kidnap Zeemon at the graduation ceremony. Their deception even included chasing off an apparent raid by the Renegades Vamp, Scorp and Creepy, which had in fact been arranged as a distraction so they could report their findings to Cy-Kill. Despite Traitor not bothering to come up with a cover name only Blue Team member Tri-Trak suspected their true nature, later spotting Re-Volt and Chaos setting up an Astrobeam for the kidnapping. He didn't spot Traitor behind him, though, and Tri-Trak was knocked out by the Renegade before being strung up in the academy's firing range. They then attended the ceremony and sprang the trap - Zeemon proved tougher than expected, hurling Re-Volt over his shoulder, but Traitor was able to get an inhibitor on the councillor. They then beat an escape, followed by the Blue Team - led by a recovered Tri-Trak. While the Dread Launchers were able to fix one fault the Guardians had discovered they hadn't reckoned on Tri-Trak, who flew straight through the front of the ship - allowing his team-mates Twister, Tork and Staks to get in and blast Re-Volt, Chaos and Traitor. Zeemon was freed while Traitor was imprisoned along with his team-mates.Guardian Academy

Traitor was attacking a human town when he was attacked by a mechanical mammoth. A bystander noted he thought mammoths were extinct; Mammouth replied that ones that could change shape weren't and blasted Traitor with his cannon. Challenge of the GoBots - A Robo Machine Product

During the Diaspora, Traitor was dispatched to Level 39 along with an assortment of GoBots, including the Secret Riders and Dread Launchers. Cultural Appropriation 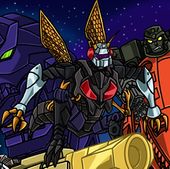 Traitor uncovered information that the Guardians and UNECOM were building a new type of interceptor ship called Space Hawks. The Hawks of Space Part 1 On another scouting mission, Traitor learned a mystic gemstone from Ancient Rome was in the possession of a wealthy human theatre enthusiast. He intended to leave his fortune, including the gemstone, to the best theatre production of the season, prompting a Renegade performance of "The Pirates of Penzance". The Show Must Go On Cy-Kill described his Dread Launcher troops to the listeners of Axiom Nexus, calling Traitor "mercurial". Renegade Rhetoric, 2015/10/17

For their own amusement, Sideways and Gong played with reality so that elements of a GoBots universe blended in and out of a Transformers universe. In this mingled reality, the Renegades lay siege to Autobot City on Earth. Blaster and Perceptor attempted to radio for help to Optimus Prime on Cybertron's Moonbase One, but Cy-Kill spotted them. He and Dr. Go dispatched Traitor and the Dread Launchers to jam the transmission. They destroyed the antenna, but were intercepted by Blaster's Recordabots before they could reach the broadcaster himself. Echoes and Fragments 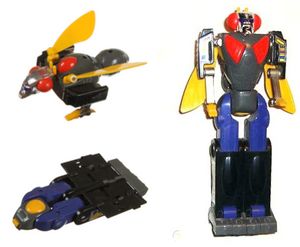 Traitor was released by Tonka in the third series of GoBots, and converts from robot to two separate vehicles - his top half becomes a robotic wasp, and his bottom half becomes the traditional landing & launch pad that all wasps have. Traitor has articulation at the shoulders and elbows, though like the other Dread Launchers his legs are big solid blocks. The figure was designed by Bandai on behalf of Tonka. As such, Traitor was never released in Japan. The rear of the box featured a very brief character biography.

Traitor was identical to his American release. The Ultrabots were among the final Robo Machine releases and unlike many later figures are just as rare in Europe as in America.