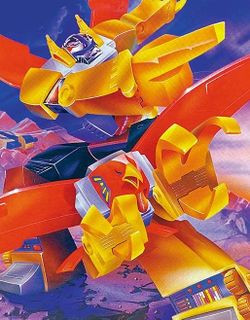 Re-Volt is - shockingly - a Renegade, and the leader of the Dread Launchers. Re-Volt turns into a falcon (or hawk) and flies off in search for his prey! 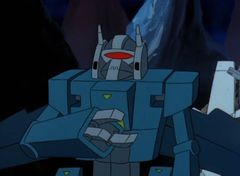 Re-Volt took his fellow Renegades Chaos and Traitor undercover at the Guardian academy, where they posed as the Red Team of prospective Guardian cadets. As the graduation would be attended by Zeemon himself it gave a great opportunity to abduct the important Guardian. Their deception extended to undermining the competing Blue team by wrecking Tri-Trak's scores and even had them chase off a staged attack by the Monster GoBots Vamp, Scorp and Creepy, rigged so they could report in to Cy-Kill. Tri-Trak however became suspicious and began checking up on the Red Team - only to be discovered, knocked out and left in the target range while the victorious Red Team attended their graduation. Tri-Trak recovered and tried to raise the alarm but it seemed too late. Re-Volt attempted to grab Zeemon only for the veteran Guardian to throw him over his shoulders but the Dread Launchers were able to subdue him and make to their hidden Thruster. However, Tri-Trak's determination had galvanised his team-mates and Blue Team raced after the Renegades, disabling the ship and capturing the Dread Launchers.Guardian Academy

Re-Volt's imprisonment was short-lived as he piloted a Thruster in Cy-Kill's mass attack on GoBotron. However the Renegade fleet was caught in a huge Guardian trap and routed, with the remnants forced into retreat.Mission: GoBotron 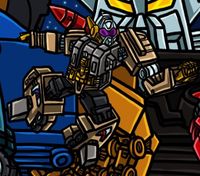 During the Diaspora, Re-Volt was dispatched to Level 39 along with an assortment of GoBots, including the Secret Riders and Dread Launchers. Cultural Appropriation

To acquire the mystical gemstone in a wealthy theatre patron's will, the Renegades put on a frankly marvelous production of "The Pirates of Penzance". Re-Volt's performance of Frederic was truly electric. The Show Must Go On On another occasion, the Renegades infiltrated a SciFi Con in order to steal the Dynamic Asymmetrical Wavelength Nullifer from its creator. Re-Volt came in cosplay to the event, dressed as the Fourth Doctor. Darkest Before the Dawn While marooned on Axiom Nexus, Cy-Kill described Re-Volt and his team of Dread Launchers to a rapt audience. Renegade Rhetoric, 2015/10/17 Re-Volt also commanded a Thruster during the Renegade assault on the Scientific Moon of GoBotron. Riders and Rebels

For their own amusement, Sideways and Gong played with reality so that elements of a GoBots universe blended in and out of a Transformers universe. In this mingled reality, the Renegades lay siege to Autobot City on Earth. Blaster and Perceptor attempted to radio for help to Optimus Prime on Cybertron's Moonbase One, but Cy-Kill spotted them. He and Dr. Go dispatched Re-Volt and the Dread Launchers to jam the transmission. They destroyed the antenna, but were intercepted by Blasters Recordabots before they could reach the broadcaster himself. Echoes and Fragments 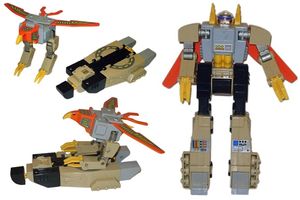 Re-Volt was released by Tonka in the third series of GoBots, and converts from robot to two separate vehicles - his top half becomes a robotic hawk (not a falcon, despite what the box says), and his bottom half becomes a rolling platform helipad thingy that can carry the bird if desired, because hawks are known for riding around on carrier vehicles. Re-Volt is one of the most articulated GoBots, with universal joint shoulders, bicep swivels, elbows, and fingers/talons, as well as hip joints. The figure was designed by Bandai on behalf of Tonka. As such, the toy was never released in Japan. As the Dread Launchers were among the final GoBots releases they can be hard to find on the second-hand market, and command relatively high prices.

Re-Volt was identical to his American release, aside from that his name was swapped with that of Chaos for reasons unknown. The Ultrabots were among the final Robo Machine releases and unlike many later figures are just as rare in Europe as in America. 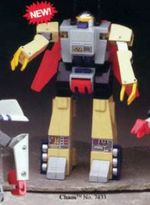