It's graduation day, but not all the cadets have the Guardian cause at heart... 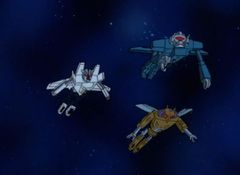 Leader-1 and Turbo are restrained in one of Thruster's detention cells while Nick and A.J. coordinate a rescue with the Red and Blue teams of Guardians. The ship is protected by a diffusion field; Twister of the Blue Team reports that Tri-Trak has already knocked himself out after running into it. A.J. then tells the leader of Red Team, Re-Volt, of a secret weakness in the shield and his team-mates Chaos and Traitor help take it down. The impulsive Tri-Trak then races in to free Leader-1, despite Nick warning him of the possibility of booby traps. It is too late and Thruster explodes. Thankfully it was all just a training exercise, though instructor Scooter and supervisor Zeemon give the Blue Team 200,000 penalty points - a record at the Guardian Academy. Tork of Blue Team objects and blames Tri-Trak but Leader-1 tells him teamwork is a crucial part of being a Guardian. The next exercise is flights around the solar system; as they reach Saturn the Red Team grows tired of keeping pace with the Blue Team and sets off. Radio interference then stops communications as Tri-Trak spots something on one of Saturn's moons, which should be deserted. He goes in to investigate, with the rest of Blue Team, A.J. and Nick following. They are then attacked by Vamp, Scorp and Creepy. The Red Team meanwhile meet Cy-Kill on Saturn itself; the three are really Renegade spies. They give him the details of Thruster's diffusion field weakness while he gives them a miniaturised Astrobeam, planning to abduct Zeemon at the Academy graduation ceremony and Brainstorm him to gain access to Guardian secrets. 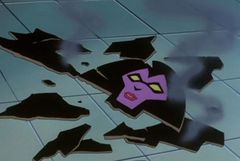 Tri-Trak is saved from Creepy's claws by Tri-Trak but the Renegade restrains them both with webbing; as the cadets have not been through final modification and cannot convert they are unable to fight on an equal footing. However, the Red Team arrive and the Monster GoBots retreat. Tri-Trak is suspicious that they retained use of their radios and that the Renegades were driven off so easily and a fight nearly breaks out between him and Re-Volt. However, A.J. and Nick cool things off and they all return to the Academy ahead of the final test - target practice in a shooting gallery of Renegade and Guardian targets; the former shoot back and must be destroyed for points, the latter don't shoot and destroying them costs points. Tri-Trak seems set for a record score until he is attacked by a target of Scooter; he tries telling the real Scooter but no-one believes him. Everyone then receives their scores - with Tri-Trak as the only cadet not to graduate. He believes his scores were rigged and after goading by Tork sets out to prove it. Later he spots Re-Volt and Chaos secreting the Astrobeam projector on the stage that will be used for the ceremony but is spotted and knocked out by Traitor before he can tell anyone. 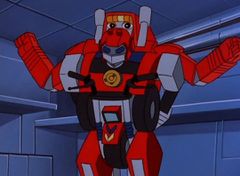 The next morning Tork, Twister and Staks get themselves ready ahead of the ceremony, though Nick and A.J. are worried about Tri-Trak, whose recharge pod hasn't been activated all night. They decide to check if he's investigating the firing range but are fired on by the targets - including one of Leader-1. At the ceremony Leader-1 introduces the cadets to the audience and calls on the Red Team; as the highest scoring graduates they will be the first through the Modifier. In the firing range A.J. and Nick are able to tool up in combat suits and she takes out most of the targets before they find Tri-Trak, strapped to a target of Scooter. A.J. blasts the neural inhibitor off his chest and he informs the pair of the Red Team's treachery. Zeemon meanwhile gives the Red Team their medals for passing the course before they reveal their true colours and try to take him. The old politician hurls Re-Volt over his shoulders but Traitor is able to restrain him from behind. Cy-Kill, Crasher and Cop-Tur then Astrobeam in, planning to use their captive as a shield. However Tri-Trak appears and knocks Cy-Kill down before diving through the Astrobeam portal, with the rest of Blue Team following. A blast from Cop-Tur takes out the portal, trapping himself, Cy-Kill and Crasher at the Academy, and forcing them to fly off alone as Path Finder, Hans-Cuff and Rest-Q advance on them. Meanwhile at the other end of the portal Re-Volt, Chaos and Traitor have a waiting Thruster and get onboard, activating the stealth device and covering the fault on the diffusor field. The Blue Team seems to be too late; however Tri-Trak has an idea. Meanwhile Cy-Kill, Crasher and Cop-Tur have accidentally boarded the Thruster simulator and are surrounded by a huge force of Guardians. Meanwhile Re-Volt pilots the real Thruster away only for Tri-Trak to smash through the front windscreen and the rest of Blue Team soon arrive, subduing the spies, though Cy-Kill's group are able to burrow out of the simulator and escape. The ceremony is reconvened, with Zeemon congratulating Tri-Trak and announcing that the Blue Team can stay working together as a team - codenamed Secret Riders. 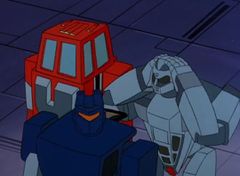 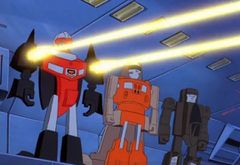 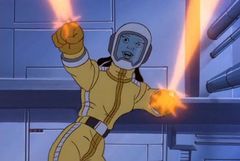 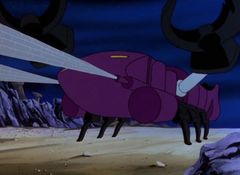 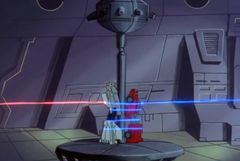 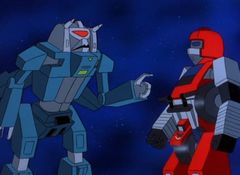