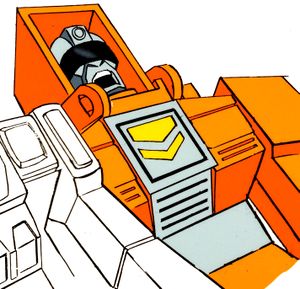 You'll usually see the cranky Crain Brain on the defensive, using his great strength to provide some much-needed muscle for the Renegades. And he is mostly muscle—although Crain Brain considers himself something of a genius, he's unaware that most other Renegades have started calling the dim-witted GoBot "Lame Brain" behind his back. When the need arises, Crain Brain's heavy-duty crane arm lets him haul and lift fortifications into place... or casually deconstruct enemy defenses in his path. 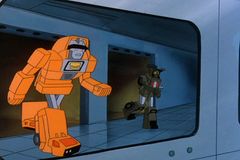 Crain Brain was one of the Enemy Machine Men from Robotron who joined Cy-Kill in targeting the peaceful planet Earth for conquest. Along with his comrades, Crain Brain soon forced the Friendly Machine Men into a retreat while causing huge destruction. Whether Crain Brain, Screw Head, Spoiler could fight off the resulting counter-attack, even with the aid of Cy-Kill and Geeper-Creeper, was unknown.Space Wars 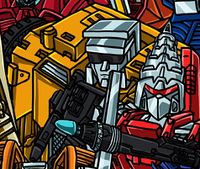 When their universe was threatened by a great Cataclysm, Crain Brain and some other GoBots fled their original universe and traveled to Level 51. Cultural Appropriation

Crain Brain was onboard the Renegades' Thruster when Doctor Braxis turned their own guns against them to steal a Sonic Amplifier. Shock and Awe Crain Brain and Scorp intercepted a recently-arrived deep-space mission as they re-entered Gobotic space after a long absence. Some members of the crew chose to join the Renegades, including Vain Train. Cy-Kill chose to team up Crain Brain and Vain Train for "obvious reasons." Brother's Keeper Crain Brain was one of the Renegades on Cy-Kill's basketball team as part of his latest scheme to destroy the Guardians. Though their teamwork was poor, Dr. Go helped them cheat with the help of a telepathic chip that let them control the ball. In the ensuing match, Crain Brain and Crasher blocked Leader-1; he later stole a pass from Treds and dunked the ball from halfway across the court to tie the score. Double Dribble Crain Brain accompanied the newly-sentient Rube to Earth on a mission to steal Doctor Blanco's Transmutation Ring. Crain Brain continually mocked Rube's inexperience and penchant for rookie mistakes. This backfired on the Renegade after an exasperated Rube found a kindred spirit in the similarly belittled Blanco. The two abandoned Crain Brain, who contacted Cy-Kill with news of this latest development. One Born Every Minute

When the Renegades tricked the Guardians into leaving Earth and then shielded the planet beneath an Embargo Field, Crain Brain and Doctor Go watched over the field's projector in the Eiffel Tower. They were ultimately defeated by Tri-Trak, Nick Burns, and the dimension-hopping Spy Changers Wheeljack and Trailbreaker. Ask Vector Prime, 2015/09/30

In a hybrid universe where the Transformers and GoBots coexisted, Crain Brain, Spoons, and Screw Head used their vehicle modes to breach the walls of Autobot City, singing as they went. Crain Brain was sent tumbling into the river when Hot Rod and Kup used the Renegades as impromptu ramps. On the way back to Cybertron, Zero pushed Megatron and several other dying combatants out of Astrotrain. They found Unicron, and after Megatron bargained for his life he and his troops became new servants of Unicron. Crain Brain was reformatted into a mindless Sweep, loyal to Deadlift. Echoes and Fragments 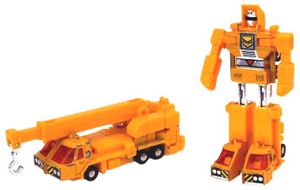 Crain Brain was released by Tonka in the first series of GoBots, and converts from robot to Unic K-200B crain crane truck in 3 steps. The toy was a repackaging of Crane Robo from Machine Robo, with no significant changes aside from the omission of the extra sticker sheet included with the Japanese version. His crane jib is a separate piece that needs to be removed for robot mode, otherwise it sprouts out of his stomach and may make those with a poor grasp of reality think it's a penis. Unfortunately, there isn't anywhere else to put the jib in robot mode, so it just sits to the side - and is thus often missing from loose examples. The robot has articulation at the shoulders. For unknown reasons Crain Brain was not released in Europe or Australia. 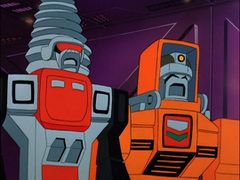