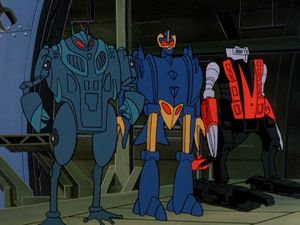 "Even now, my deadly Robo-Scorpions swarm across Big MT with their pincers and pointy laser tails. Soon, all Science will be mine." (Scorp is the one on the right.)

Scorp is a Monster GoBot created by the Master Renegade. 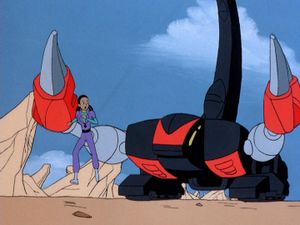 "Ah, trying to steal the X-2 Transmitter Array Antenna, are you? You won't succeed, not if my lethal Robo-Scorpions have any say in the matter."

"Intruder, you will not escape the eyes of my Robo-Scorpions! Or their pincers!"

Scorp and the other Monster GoBots briefly betrayed Cy-Kill back to the Master Renegade when he and Bladez seized control of Gobotron. Cy-Kill gave them a good blasting once he escaped the Prison Moon, and seemingly brought his monster troops back in line again. Graduation Day

Scorp and Crain Brain flew a pair of Space Hawks as they intercepted Hi-Way and his crew on their way back to Gobotron. Brother's Keeper

Scorp and the Renegades traveled to Quartex so Cy-Kill could recruit Jaw Bone, the Fossil Lord, and his combined Fossilsaurus mode to their cause. When Jaw Bone didn't agree fast enough, Cy-Kill had Spoons take his daughter, Ulna, hostage. On Earth, Fossilsaurus helped the Renegades attack UNECOM and Scorp was able to download vast amounts of classified intelligence data. Unfortunately, the Guardians freed Ulna and Fossilsaurus turned against the Renegades. Fossil Fallout

Cy-Kill, Scorp, and Klaws assaulted the Guardians at the undersea Charybdis Labs. An explosion of Scylla-Waves allowed nearby sealife to begin communicating with the humans and GoBots, and Cy-Kill convinced the whale Leviathan to lend his people's strength to the Renegade cause. The Guardians eventually convinced the sea mammals of Cy-Kill's treachery, however, breaking the alliance. Scylla and Charybdis

As Sideways and Gong played with mixing universal streams, Scorp and the Monster GoBots took Hot Rod and Kup prisoner for the Master Renegade on Antares III. Echoes and Fragments 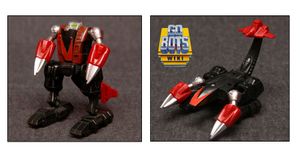 "Well, every scientist needs an army. Mine came to me after these rather large scorpions kept coming in from the dessert. Like poisonous frosting."

An import of the Machine Robo Zalios toy, GoBots Scorp transforms from a monstrous robot to a monstrous scorpion-tank thing. Like the other Monster GoBots, Scorp was repurposed from a Devil Invader, who served as the sole villains for the original Machine Robo line. He features die-cast metal parts. The sliding joints inside his legs wear down very easily, meaning most loose samples of Scorp will have difficulty standing in robot mode. He also features ball-jointed elbows, a rarity for a 1980s robot toy. Scorp was released in the second series of GoBots figures in 1984 and was reissued in the third series in 1985 with a holographic sticker.

The sixth new figure sold after the shift to Tonka-based titles, Scorp retained both his GoBots name and faction. He was repackaged and released by Bandai Australia on a black backing card depicting a blue-tinted alien landscape.

Zarios was released by Bandai Europe in 1985 as the third and final figure in the initial Enemy Invader subline. While the toy itself remained unchanged, Zarios (along with Casmodon and Falgos) featured new packaging design. A faction logo was introduced (which the Machine Men version also shared), and while opposed to the standard blue background, each backing card depicted a group of four different colored planets against a black starry background. This design was a modified version of the figure's Machine Robo artwork. While initially unique for the trio, it eventually became standard packaging (sans logo) for the remainder of the toyline.