Cy-Kill is free! The universe beware! 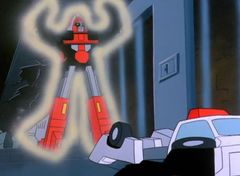 On the Prison Moon, Hans-Cuff, Blaster and Flip Top collect Cy-Kill from his cell to stand trial on GoBotron. While the Renegade's weapons have been disconnected he surprises his guards by removing one of his wheels from his shoulder, hurling it at Blaster. The shocked Guardian fires a missile that brings down a section of the roof, disabling himself and Flip Top - and freeing Fitor, who grabs Hans-Cuff before he can shoot Cy-Kill. Fitor takes the Guardian's Power Pack, allowing the Renegade's weaponry to come back online. Meanwhile onboard the Command Center, Matt, Nick and A.J. are in dress uniform as Earth's appointed representatives for the trial. Scooter is unable to raise the Prison Moon. Path Finder lands the ship but when Leader-1 investigates he is met by the injured Hans-Cuff, who tells them of Cy-Kill's escape and the injuries to his fellow guards. 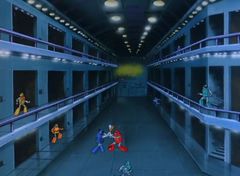 Cy-Kill and Fitor remain at large, heading out to the dark side of the moon's surface as Rest-Q repairs Hans-Cuff. Turbo has not detected any escaping ships so Small Foot deduces the escapees are still on the moon - unknown to the Guardians the pair have found a ship stashed on the facility by Cy-Kill years previously. Scooter and Nick meanwhile head to the prison's control room to help with surveillance while Rest-Q, Small Foot and A.J. recover Blaster and Flip Top. Leader-1 and Matt scour the surface of the moon while Turbo looks for clues inside. However Cy-Kill's plan moves to the next stage as he has Dr. Go and Bad Boy send a stealth device by Astrobeam from onboard the near-complete Roguestar. Turbo finds them but is shot down by Fitor and shocked by Cy-Kill, crashing down a deep channel on the Moon's surface. Cy-Kill then blows up the main energy junction, allowing the other imprisoned Renegades to escape - Crain Brain, Geeper-Creeper, Crasher, Cop-Tur and Destroyer among them. 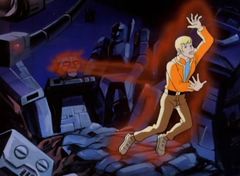 Turbo is able to activate his distress signal and attract Leader-1 but Nick and Scooter find themselves cornered in the control room by Crasher, Cop-Tur and Destroyer - though the trio have yet to recover their weaponry. Leader-1 and Matt find Turbo but he is frozen solid, so the Guardian attempts to use his forcefield to raise the injured warrior's temperature. Turbo comes around but is still damaged. Cy-Kill and Fitor meanwhile are able to take off, though the stealth device is malfunctioning. Scooter and Nick are able to escape Crasher and take cover in an old storeroom full of scrapped GoBots. The other Guardians reconvene at the Command Center but Cy-Kill has been able to get away; Turbo prepares to look for Scooter and Nick only to collapse. Rest-Q is unable to find a way to combat Turbo's cranial overheating, and with nothing else to be done Leader-1 returns to searching for their missing friends. In the old storeroom Nick grapples with the head of a deactivated robot, triggering a beam that transports the pair away seconds before Crasher finds them. Her disappointment is rapidly allayed when Destroyer informs her they have found their weapons. 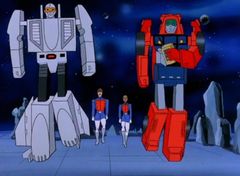 Small Foot and Path Finder are unable to locate Scooter and Nick anywhere on the moon until A.J. receives Scooter's distress call - coming from the Moon of Knowledge. The pair have materialised in a small room with no exits, where Nick inadvertently activates an ancient video system. An old news recording plays, detailing events of the First Renegade Revolt. The Command Center leaves to follow their signals, frustrating Crasher's plans to storm the ship - and unwittingly nearly ramming Cy-Kill's cloaked shuttle. The Guardians arrive on the Moon of Knowledge, where Scooter and Nick view a recording left by the Last Engineer, inventor of the GoBot form, who tells of the Renegades' use of a huge asteroid to damage GoBotron and pushing its' occupants to the edge of extinction. He tells of a research base set up on Antares III, and Scooter notes it is the first clue to their creator's actions after his disappearance. Leader-1, Small Foot, Matt and A.J. follow Scooter's distress signal to the base of a statue of the Last Engineer on the moon's surface. The Guardians are able to cut their way through and find their friends. The Guardians set course for the Antares star system in the hopes of finding the Last Engineer to help Turbo, but their plans are overheard by Fitor and Cy-Kill, who plan to use the opening to collect their fellow Renegades from the Prison Moon... 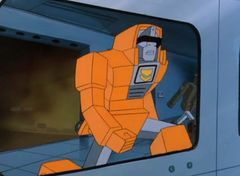 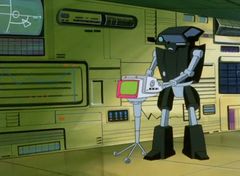 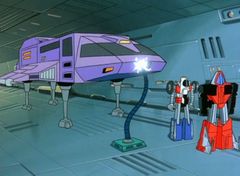 1986 — Challenge of the GoBots — The GoBotron Saga (Vestron Video)