Scooter trades in his holo-projector for something with more firepower. 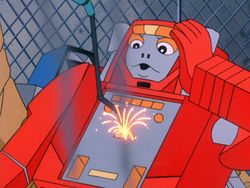 Nick, A.J., Small Foot, and Scooter attend a stunt car rally, but their afternoon entertainment turns to trouble when one of the garbage trucks being jumped by driver Dolby Danger turns out to the Renegade Fly Trap in disguise! Crasher and BuggyMan immediately crash into the stadium to join Fly Trap in causing havoc on the track, forcing the two Guardians to intervene, whereupon Crasher reveals they have come to capture A.J. and Nick. Scooter's lack of weaponry means he is unable to defend himself and his friends against the Renegade madwoman, and he winds up taking a hit that damages his hologram projector. Though the quick-thinking Small Foot is able to rescue Nick and A.J. from Fly Trap clutches by using her cable winch to trip him up, the heroes remain outnumbered and surrounded until help then arrives in the form of Leader-1 and Turbo in their Power Suits. The enhanced abilities of the suits allow them to quickly rout the Renegades, and Scooter is taken back to the Command Center for repairs. 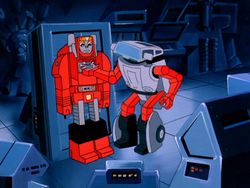 With Leader-1 unable to repair Scooter's holo-projector, the little Guardian has to be Astrobeamed to GoBotron so Professor von Joy can tend to him. Scooter takes the opportunity to request that a set of hand-blasters be added to his armament, the installation of which requires the removal of his holo-projector entirely. Scooter is thrilled with the new weapons, but starts getting too big for his boots, shirking his duties back on Earth—like repairing a power surge problem in the Command Center—in favor of target practise so he can be ready to take on the Renegades at the next opportunity. Incensed at his minions' failure to execute Crasher's kidnapping plan, Cy-Kill determines to rob the Guardians of their Power Suit advantage once and for all. While Screw Head creates a distraction by attacking UNECOM's satellite tracking station in Hawaii, drawing out Leader-1 and Turbo, Cy-Kill, Crasher, and Scorp strike the Command Center, manned only by Scooter and Small Foot. Scooter rushes to confront the villains, only for his lack of control of his new weapons to prove his undoing, as his attack goes wild and destroys the communications console, preventing the two Guardians from calling for help. Cy-Kill radios Cop-Tur and Bad Boy to initiate their attack on an Alaskan UNECOM station to continue keeping Leader-1 and Turbo occupied, then throws Scooter in a detention cell, and tries to force Small Foot to release the Power Suits from the security grid they are locked behind. 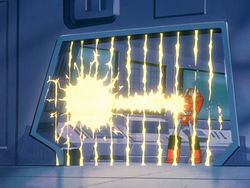 Scooter affects an escape by exploiting the power surge problem he failed to fix, zapping the energy bars of his cell with his blasters and causing them to overload and shut down. Unfortunately, the surge also deactivates the grid protecting the Power Suits, which prompts Cy-Kill to recall Cop-Tur and Bad Boy, instructing them to meet up with his team at Thruster. Scooter realizes he needs to distract the villains to keep them from donning the suits, but without his holo-projector, he has to fall back on the voice-mimicking talents he often uses in concert with his illusions. Impersonating Leader-1 from the other side of a doorway, he baffles Cy-Kill just long enough for Small Foot to slip out of his clutches. The two Guardians then make a break for the Command Center's exit, which is guarded by Crasher; Scooter repeats his trick, this time imitating Cy-Kill to get Crasher away from the door, but the real Cy-Kill and Scorp catch up to them before they can escape through it. Fortunately, Leader-1 and Turbo arrive to aid their comrades, having deduced from Cop-Tur and Bad Boy's quick exist in Alaska what Cy-Kill was up to, and the Renegades are forced to retreat without the Power Suits.

Realizing where his true talents lie, Scooter Astrobeams back to GoBotron to have his blasters removed and his holo-projector restored. He reveals to his teammates that his old powers are back by disguising himself as a pizza delivery guy, whose presence in the Command Center shocks everyone... then finally gets to work fixing that power surge problem, with a little help from Small Foot! 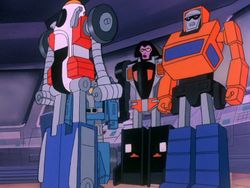 "The plan... almost worked."
"And you're almost pathetic!"

"I'm going to blast you two pests into GoBits!" 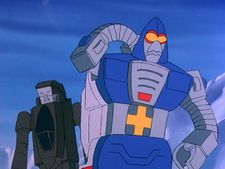 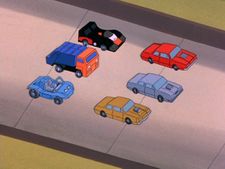 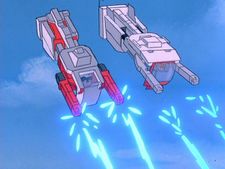 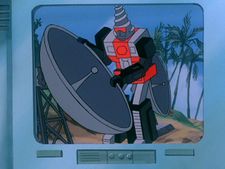 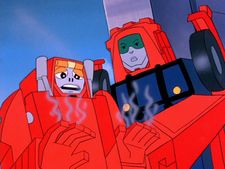 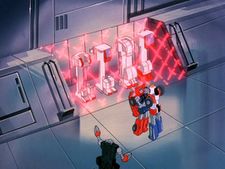