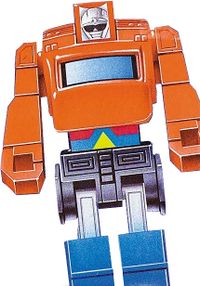 Fly Trap is a Renegade and one of Cy-Kill's more capable troopers. His converted mode causes people to underestimate him, or ignore him due to the smell. This unique form of "active camouflage" makes him an adequate covert agent as well.

After the Renegades took control of GoBotron, Fly Trap and Water Walk were stationed at a gun turret to keep an eye out for Guardian activity when the Last Engineer's ship Courageous appeared. They were however unable to hit the manoeuvrable craft, which escaped into hyperspeed to Earth. Flight to Earth 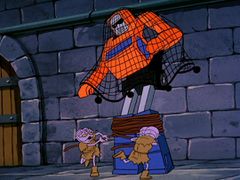 Fly Trap was later floating around GoBana with his alien henchman Gorn when he spotted Matt, A.J and Nick taking in the sights with Scooter ahead of a crucial peace conference. They knock Scooter out and take the humans down to Old GoBotron and await Cy-Kill's arrival. When Fly Trap and Gorn go to retrieve them from their cells Matt attacks them and the trio of humans escape. The Renegades and their alien friend track them to Wrecks' arena. The humans had already escaped however, and Fly Trap found himself first beaten up and then captured by Wrecks' little urchin followers. Blew his big audition for regular henchman status there. Lost on GoBotron. Later Fly Trap travelled to Earth as one of the Renegades involved in the successful merging of all of America's crime families into a single army under ally Murchison, overwhelming the Guardians and other authorities by sheer weight of numbers. Along with Stretch and Scales he robbed the Federal Gold Reserve, the trio easily beating Turbo when he tried to intervene. Crime Wave He later pretended to be a normal garbage truck at a stunt car race, planning to kidnap A.J and Nick, with help from Crasher and BuggyMan. As initially the cadets' only escort were Small Foot and Scooter they had the upper hand until Leader-1 and Turbo arrive in Power Suits, forcing the Renegades to retreat. Later he was berated by Cy-Kill for his claims that the plan "almost" worked. Scooter Enhanced After the capture of the young scientist Buddy, Fly Trap returned to the Renegades' base inside Big Horn Mountain along with Spoiler, Slicks and BuggyMan. They were followed by Scooter and Nick Burns, who stowed away on their Thruster and released Buddy. Fly Trap opened fire on the trio but they escaped. Whiz Kid 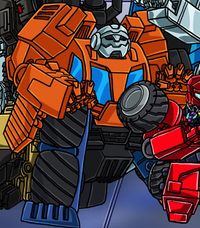 Cy-Kill considered Fly Trap a good example of diversity among the GoBots' alternate modes compared to Cybertronians. Renegade Rhetoric 2015/10/14 Fly Trap, Hornet, and Crasher joined Cy-Kill in battling Leader-1's unit over the Space Hawk project. The Hawks of Space Part 1 When a raid on a Guardian communications hub went bad, Cy-Kill was particularly harsh to his troops. So, when the Master Renegade appeared offering Power Suit upgrades to the Renegades if only they made him leader, Fly Trap, Spoiler, Loco and Screw Head eagerly turned on Cy-Kill. Using the P1 suit, Fly Trap became virtually invulnerable. Eager to test their might, the Power Suited soldiers and the Master Renegade launched a direct assault on the GoBotron Fortress. When the time came to form a dark copy to battle Courageous directly, however, the "united" Renegades couldn't agree on who should control the combiner. The hobbled "Grungy" was easily beaten apart by Courageous, and the Renegades meekly limped back to Cy-Kill, begging for his good graces. Coup de Grunge

Cy-Kill created an alternate universe by using a Time Portal to reach back in time and remove Luther Unum from events before he became Leader-1. In this new reality, Renegades ruled Earth and GoBotron. A group of Guardian rebels attempted to free Luther from Cy-Kill's clutches, but they ran into Fly Trap and Decker Decker. Renegade Victory Part 1 Demonstrating the quick thinking he would one day be famous for, Luther disposed of the giant Renegades by outmaneuvering them and then tricking the villains into firing on each other. Renegade Victory Part 2 Fly Trap was one of the Renegades tapped by Cy-Kill to become a ninja. He trained earnestly at the Ashi Dojo in Japan as Cy-Kill held the Sensei's son hostage. Fly Trap and Decker Decker raided the Command Center itself to recover an experimental microchip Scooter had been working on. Although the Guardian spotted them, the Renegade ninjas overpowered Leader-1 and Turbo with their slick moves. Their fast mouths, however, clued Leader-1 in to their training, and he approached the Sensei for the training to defeat Cy-Kill's ninjas. Ninja Leader-1 defeated Fly Trap and all six of the Renegade ninjas, after which a literal plot device removed all memory of their training from each of the GoBots. Cy-Kill's Ninjas Fly Trap coordinated with a human spy inside UNECOM on behalf of the Renegades. They had a regular drop point in a dumpster behind the base, which Fly Trap covertly emptied to retrieve coded messages, such as the creation of the new element, Scootonium. The Scootonium Scenario

As Sideways and Gong played with mixing universal streams, the Renegades staged an all-out assault on Autobot City on Earth. Their hijacked Command Center was spotted and shot down by Nick Burns and Hot Rod. Fly Trap and Destroyer deployed to eliminate the interlopers. Destroyer prepared to blast them, but the Autobot Kup spoiled his aim, diverting the cannon blast to Fly Trap instead. Echoes and Fragments 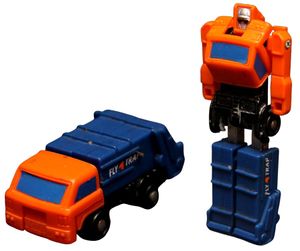 Fly Trap was released by Tonka in the second series of GoBots, and converts from robot to Mitsubishi Fuso Canter garbage truck in 8 steps. The toy was a recolour of Sanitation Robo from Machine Robo, with a new colour scheme replacing the white plastic of the Japanese version with orange, also replacing the Japanese text on the stickers on the rear box with the character's new name. For the American release the figure's cab, arms and helmet were all recoloured from white to orange while the Japanese text tampographed on the rear section was replaced by the GoBot's name; this made Fly Trap was one of the first toys to be given a new colour scheme by Tonka. Fly Trap has the smallest vehicle mode of the GoBots range but due to his transformation pattern he is of regular height in robot mode. In robot mode he has articulation in the shoulders; while there is some movement in the legs, if they're not locked in the correct position he will collapse.