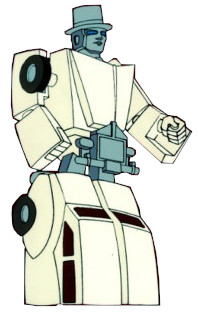 The vainglorious Tux takes pride in his glitzy limousine mode, just one symbol of the high-society life he aspires to lead. His foppish appearance doesn't get in the way of his Renegade allegiance, and his high-gloss trappings do an effective job at concealing Tux's penchant for dirty deeds and general thuggery.

He is sometimes known as Stretch.

A scheme of Cy-Kill's involved the Renegades allying with several human crime bosses, supplying them with GoBot technology to help them take over the Earth, overwhelming the Guardians and UNECOM. Stretch became the personal conveyance of the gangster Murchison and ferried them to a jewelry store where they caused havoc. He then accompanied Fly Trap and Scales to the National Gold Deposit, where they took care of Turbo and stole 30 million dollars worth of gold. He chased Scooter when he and Matt Hunter tried to infiltrate their operation - which ended in him and Crasher colliding with an irate Cy-Kill - then chauffeured Murchison to the White House when he and his shielded army of gangsters invaded Washington, D.C.. When the Guardians managed to turn things around, Turbo managed to catch Stretch in a tripwire and take him out of the fight. Crime Wave 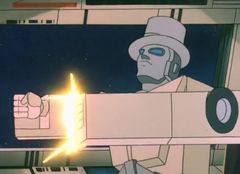 Cy-Kill later hatched a plan to take out the Guardian's superweapon Courageous, and Stretch helped oversee the Renegade leader's construction of his new Puzzler combiner. When human collaborator Larry Cocoa and his wife Hilda requested an audience with the Renegade leader, Stretch witnessed the aggressive negotiations and later opined that the Renegade leader should dispose of the "slugs". Auto Madic Later, fellow Renegade Zero made a play for power and defeated Cy-Kill in combat. Stretch witnessed the battle and opted to rally under the flag of the new leader, along with Geeper-Creeper, Twin Spin, and Bad Boy. Stretch travelled to Earth, where he masqueraded as General Newcastle's limousine to get close to a UNECOM base. He chased Nick, A.J. Foster, and Matt through the halls before banging his head on a door. When Leader-1 arrived with reinforcements, Turbo blasted Stretch off the road and sent him tumbling into a ravine; he was saved by Zero, who knocked Turbo unconscious and took him hostage. Back aboard the commandeered Roguestar, Stretch and Geeper-Creeper served as wardens for their two prisoners Turbo and Crasher, but accidentally freed the prisoners and deactivated their restraining bolts after Zero made his move on Gobotron. Stretch and the other rebellious Renegades later returned to Cy-Kill after this led to Zero's strategy falling apart; Zero was probably happy to see Stretch at least go after his blundering. The Third Column 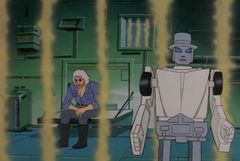 Stretch was later pulling guard duty on Roguestar, watching the cell holding the imprisoned Master Renegade. He was easily fooled by Vamp and Scorp telling him they wanted to taunt their creator in peace and was easily intimidated in to moving away; the Monster GoBots in fact plotted with the Master Renegade to have him released. He was again on duty when their plans came to fruition; Creepy knocked out the cell's energy bars and Scorp easily took care of Stretch, allowing the group to escape. Quest for New Earth

During a battle between the Friendly Machine Men and Enemy Machine Men on Earth, Tux was able to save Fitor from Rest-Q by ramming the latter in his car mode. However, Rest-Q was able to avoid a fatal blow, inspired by the need to get a human family to safety. Even after switching to robot mode Tux was unable to stop the Friendly from getting the bystanders to safety. The Combat 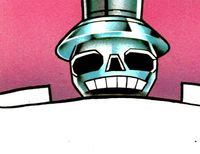 With his swish alt mode and a voice synthesizer, Cy-Kill felt Tux was the perfect person to allow him to take over Wilson Industries. Mimicking reclusive millionaire Walter Wilson, Tux was able to get the work force to manufacture Sorium. This piqued the interest of the Guardians, who sent Scooter and Matt to investigate. Tux was able to capture Matt but Scooter was able to get word to the other Guardians, who helped ruin the plan. Walter Wilson's Millions Tux was later part of the Renegade army assembled at Mauna Mauna but they were defeated by the Guardians after a long battle. The Battle at the End of the Earth 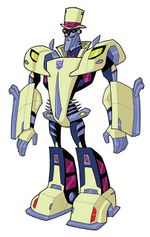 You look at Mr. Fancy Pants and hold the trophy high
Everybody cheers while he's blinking back the tears
He doesn't even have the best pants

In a distant universe, business mogul Porter C. Powell acquired a fragment of the legendary AllSpark. A series of events caused the fragment to make contact with his limousine and brought it to life, turning it into the Decepticon Stretch. Stretch caused havoc as he financially ruined his old owner, and it was only after Powell teamed up with his old rival Isaac Sumdac that they managed to outwit Stretch by luring him into a space bridge, which sent him 17 Levels away from their current reality. Hurled across time and space, Stretch landed on GoBotron and used his internal copy of the Powell Motorworks historical database to start a new life by selling stylish new Earth modes to the GoBots. Soon every wealthy GoBot had adopted a new Earth-themed alternate mode. Eventually, however, business dried up and his money ran out, so Loco recruited him into the Renegades. Ask Vector Prime, 2015/09/30

Fleeing the Cataclysm that threatened to destroy the universe, Stretch was one of a group of GoBots who relocated to an alternate dimension (apparently either "Level 72" or "Level 77"), where he adopted a new appearance to blend in. Cultural Appropriation

Stretch, Gunnyr, and Bad Boy attacked a Guardian training exercise and nearly took several hostages before Leader-1 and his veterans arrived to see them off. Rebels Without A Circuit Later, after Cy-Kill disappeared into another dimension following an accident with an experimental Anti-Phase-Displace Blaster, Stretch and the Renegades found themselves under attack by the Guardians, galvanized by Cy-Kill's absence. Stretch and Spoons were pinned down by enemy fire, but at the decisive moment, Cy-Kill returned from his interdimensional exile with new reinforcements. Clutch and Warpath rescued Stretch and Spoons, and the Renegades drove their enemies off. Opportunity Knocks Part 2

In a hybrid universe where the GoBots and Transformers coexisted, Stretch took part in the battle of Autobot City. Echoes and Fragments 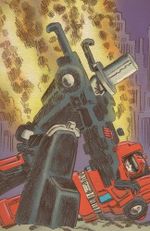 Stretch was the personal limousine Go-Bot of T. Coriander Banks, and transported the businessman to the illegal Go-Bot gladiator fights he was hoping to persuade Turbo and Matt Hunter to join. When they refused he briefly squared up to Turbo before the pair escaped. Issue 1 Later, when Banks' tinkering to produce greater levels of bloodlust in his fighters led to a full-blown Go-Bot uprising, Stretch turned on his owner, leaving Banks suspended on power lines with mortal injuries. Stretch then attacked Turbo, Scooter, Matt Hunter and A.J. Foster, who set him on fire with improvised Molotov cocktails containing Go-Bot fuel. Nevertheless he was still able to fight Turbo, pounding the racing Go-Bot down into the sewers.Issue 2

A white version of Stretch or Tux was also seen among Cy-Kill's Renegades between the two appearances of Stretch; whether this means that Stretch was mass-produced like Hans-Cuff, that Tux also exists in the IDW Go-Bots universe as a separate character or was an art error is unknown 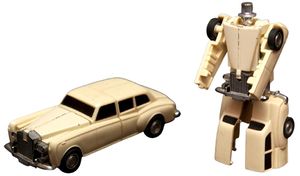 Tux was released by Tonka in the second series of GoBots, and converts from robot to Rolls-Royce Phantom VI limousine in 10 steps. The toy was a repackaging of Limousine Robo from Machine Robo, with no significant changes but omitting the extra sticker sheet of the Japanese release. Tux features die-cast metal parts and rubber tires, and has articulation at the shoulders. Photodegradation and paint wear are common on loose samples. The toy always looks like the famous Rolls-Royce Spirit of Ecstasy has snapped off the top of the grille, but it was never there - either to avoid breakage or because even in the eighties Rolls-Royce were big on copyright. Tux has a chrome top hat; this is awesome.

An unchanged Tux was included one of Tonka's Renegade Gift Pack #1 sets, with similarly unchanged versions of Spoons and Stallion.

Two versions of Tux were issued in Europe; one was unchanged from the Japanese release of Limousine Robo, while the other featured the chrome front grille repainted black. The reason for this change is unknown; both versions were issued simultaneously. It was possibly down to a production error. Both versions restored the Japanese sticker sheet, which included Union Jacks and coats of arms for the flanks of the car. Notably all European cross-sells featuring Tux on the card-backs (which included Tux himself) featured a sticker reading 'Limousine/Tux' stickered over the printed 'Rolls Royce/Tux', suggesting Rolls-Royce's legal team had words.

The Australian release of Tux was the same as the European version.