From GoBots Wiki
(Redirected from Destroyer)
Jump to navigationJump to search

Destroyer is a Renegade with a turret for a head and a cannon for a face. His gun literally does the thinking for him. 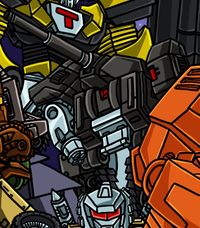 During the Diaspora, Destroyer was dispatched to Level 63 along with an assortment of Guardians and Renegades. Cultural Appropriation

Cy-Kill created an alternate reality where Renegades ruled by removing Leader-1 from earlier in the timestream. Destroyer was one of the Renegades ordered to guard the Time Portal on Saeculum Gamma, to prevent anyone reversing Cy-Kill's actions. Renegade Victory Part 2

Captured by an alien intelligence, the Guardians and Renegades were forced to battle one-on-one in the Arena of Strife. Destroyer was pitted against Defendor. While the battle was close, Destroyer's superior firepower eventually won the match for the Renegades. GoBot Arena

During an incident when Cy-Kill and Scooter accidentally swapped bodies, Destroyer nearly obliterated his leader when Cy-Kill was stuck in the puny Guardian's form. Brain Swap

In the distant future of 2085, the Guardians and Renegades had seemingly made peace. Destroyer and Block Head guarded the Renegade Embassy on Gobotron in that era. All Tomorrow's Utopias

As Sideways and Gong played with mixing universal streams, the Renegades staged an all-out assault on Autobot City on Earth. Their hijacked Command Center was spotted and shot down by Nick Burns and Hot Rod. Fly Trap and Destroyer deployed to eliminate the interlopers. Destroyer destroyed their Lookout Mountain platform with his first blast, then converted into tank mode to finish them off. However, the Autobot Kup spoiled his aim, diverting the cannon blast to Fly Trap instead, who then crashed down on top of Destroyer. Echoes and Fragments

A repackaged import from the Machine Robo Scale Robo DX line, Destroyer converts from robot to German military Leopard 1A4 tank. The toy has an intermediate "gerwalk" mode that was identified in the European and Japanese instructions, but not in the American version. However, this "mode" was briefly featured in the American release of Challenge of the GoBots.