Rest-Q is the medic for the Guardians. He is skilled in the use of the Modifier, as well as improving and focusing the self-repair systems of his fellow Guardians to the appropriate injured areas. 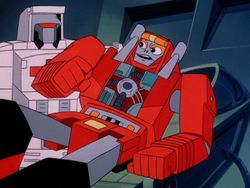 Rest-Q was stationed on GoBotron when the Renegades stole the Astro-Beam from the Guardians. He was injured in the raid, but warned Hans-Cuff of the theft. Battle for GoBotron The Final Conflict

It's the Thought that Counts Doppelganger Whiz Kid 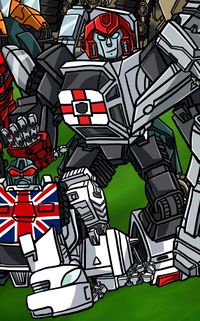 When Cy-Kill discovered a cyber-mimetic virus at an ancient temple in the Himalayas, he wasted no time unleashing it on the Guardians. Fortunately, Rest-Q developed a cure that managed to save his fallen friends. The Best Medicine

Rest-Q reported via Astro-Beam when Leader-1 was seriously injured fighting Cy-Kill. He confirmed Leader-1 was reliving his own nightmares and memories of failure, keeping him in a comatose state. Still, A.J. and the Guardians managed to change the narrative, reminding Leader-1 of all the good he had accomplished, and the Guardian commander soon recovered. Nightmares of a Leader

A repackaged import of the Machine Robo Ambulance Robo toy, Rest-Q converts from robot to ambulance.

The sixth toy from the second wave of figures, Ambulance Man was released by Bandai Australia in 1983. He remained identical to the original Ambulance Robo toy, albeit packaged on a blue backing card.

A carded repackage of Ambulance Robo, the figure now known simply as Ambulance was released by Bandai Europe at the end of of 1983.