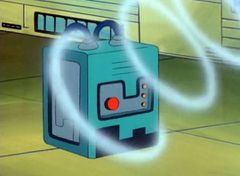 The Stealth Device is a critical piece of technology in possession of the Renegades. The device generates a cloaking field that renders its target invisible to the naked eye and undetectable by nearly all forms of long-range detection. Even Scooter's sensors can only occasionally pierce the stealth device's protection. Not a unique item, Cy-Kill has mass-produced the unit for use aboard Roguestar and every Renegade Thruster. With this advantage, the Renegades are able to infiltrate enemy territory, surprise their opponents, and then disappear into the night whenever fortune turns against them. The Guardians are constantly working on ways to duplicate or disable the stealth device, but have yet to succeed. The Stealth Device's only weakness is its' need for power, meaning if there is a sufficient drain it will stop working.

Stealth Devices allowed Thruster to enter and leave Earth's atmosphere undetected, and as such meant the Renegades' arrival on Earth and role in the destruction of the Intrepid was not discovered by NASA or any other human organisation beyond eyewitnesses Matt Hunter, A.J. Foster and Nick Burns. Battle for GoBotron When Cy-Kill broke out of GoBotron's Prison Moon with Fitor he had Dr. Go and Bad Boy Astrobeam across a Stealth Device to fit to a shuttle so they could escape undetected. This worked - but almost too well, as the undetectable ship was nearly rammed by a Command Center. Cy-Kill's Escape During their attempt to retake GoBotron, the Guardians were able to take a Stealth Device from a captured Thruster and fit it to a Command Center, allowing them to get the Power Suits close to Roguestar. However, turbulence caused Sparky to fall into the device, knocking it offline. Thankfully the arrival of the Last Engineer and Courageous meant the Guardians won out. Return to GoBotron

The power drain caused by Braxis' Nova Beam was enough to temporarily drain Roguestar, deactivating its' stealth device until Cy-Kill had the weapon jettisoned. Nova Beam The Renegades were able to make portable Stealth Devices, but these were used sparingly - Cy-Kill, Crasher and Cop-Tur used them to take possession of the Evil One's Dark Heart In Search of Ancient GoBonauts while later several Renegades were equipped with them on Earth, firstly escaping when a new Renegade base was attacked by the Guardians and later attempting to use them to kill key Guardian and UNECOM figures at a phony peace conference in Vienna. Pacific Overtures The Renegades also fitted a Stealth Device to their underwater Starfish base, making it difficult for the Guardians to locate. Depth Charge The Guardians became so desperate to find an answer to the Stealth Device they even arranged for Braxis to be released from a mental hospital in order to help create an array of satellites to detect Roguestar, but his devices did not work as intended. Braxis Gone Bonkers