Doctor Zebediah Braxis is one of the Renegades' human allies. His genius is only matched by his ego and greed; feeling his intelligence would never be recognised to the degree he deserved, he reached out to Cy-Kill for form an alliance against the human race. He is sometimes a Professor. 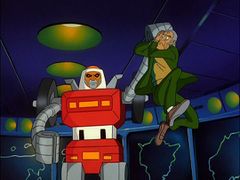 A high-ranking NASA scientist, Braxis grew weary of his lack of recognition and personal power. He covertly made a deal with Cy-Kill, leader of the Renegades on GoBotron and struck a deal with the alien - if Braxis would help the Renegades invade Earth as a staging ground for building a fleet of Zods to conquer GoBotron, Braxis would be given command of Earth. However, his hopes of getting the Renegades to Earth covertly took a hit when astronaut Matt Hunter, along with cadets A.J. Foster and Nick Burns, strayed from their schedule onboard the shuttle Intrepid and were thus damaged by the arrival of Cy-Kill's Thruster. Braxis helped cover up the incident and discredit the trio to keep his plans secret. Cy-Kill was followed by the Guardians Leader-1, Turbo and Scooter, but they opted to remain undercover and as a result Braxis was able to get his enemies suspended. However, Leader-1 was able later to persuade Matt, A.J. and Nick to help him repair Turbo. Scooter and Nick sneaked into a warehouse to get parts to fix the GoBot and overheard Braxis conferring with the Renegades. Battle for GoBotron Matt attempted to warn General Newcastle about Braxis' treachery, though the scientist was able to claim it was further evidence of Hunter's campaign against him, and the Renegades remained undetected as they set course for Stolbovoy Island, where they could find sorium for the next stage of their plans. Target Earth Braxis used it to finish his pulsar generator. He was then ordered to enter Cheyenne Mountain to activate the device; Braxis was reluctant, especially when he found out his transport would be the macabre Renegade Geeper-Creeper, but went along with it. They let the rest of the Renegades inside and the pulsar generator was activated via NORAD's satellites, with Braxis the only human not to fall under the device's control, thanks to a frequency neutraliser earpiece. Conquest of Earth He was left disappointed that he couldn't immediately enjoy his power until Cy-Kill had taken control of GoBotron, and his pleas to at least be given California in the meantime angered Cy-Kill, who threatened to remove his neutraliser if he didn't stop whining. Instead Braxis helped Cy-Kill Brainstorm the captive Leader-1 as the rest of the Renegades and the mind-controlled human military attempted to capture Turbo and Scooter. Earthbound When the Zods were finally ready Cy-Kill, Crasher and Cop-Tur left to supervise the armada, leaving Braxis in charge at Cheyenne Mountain. However, Scooter was able to use a holographic disguise to trick Braxis into letting him inside, though the Guardian gave himself away. The Renegades returned but were defeated and the Zods destroyed, with Crasher and Cop-Tur both captured. Before the battered Cy-Kill escaped he destroyed the pulsar generator and left Braxis to be captured by the recovered authority, with the scientist threatening to plead temporary insanity as he was led away. The Final Conflict 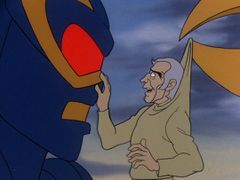 This gambit presumably failed as Braxis was next seen imprisoned in Tri-State Prison, where he was tormented by the antics of a fellow harmonica-playing inmate. Cy-Kill decided he needed the scientist back to make a new planet-destroying weapon, dispatching Pincher to break Braxis out of prison and bring him back to Roguestar. Braxis' initial joy at being released was soon tempered when he was simply slung in a cell on the Renegade ship - complete with holographic harmonica-player. UNECOM and the GoBotron Security Council soon connected his rescue with the Renegades' new Nova Beam. Once the weapon was perfected Cy-Kill promptly deposited Braxis back on Earth, to die with the rest of the planet. His warnings of the end of the world were dismissed by most as ravings until news reached Leader-1, who had him brought to UNECOM Headquarters. There he confessed to everything and then helped the Guardians block the nova beam with a comet. Nova Beam Despite this he was soon back working with Cy-Kill, helping convince old colleague Doctor Mobius to use his Inverta-ray is service of the Renegades. However, when Mobius began to get cold feet Braxis turned the Brainstormer on his former friend, and later unleashed the Inverta-ray on GoBotron; however, he had in fact been tricked into firing on one of Scooter's holograms before Mobius' son Danny sent Braxis and Cy-Kill to GoBotron by Astrobeam, where the pair were chased by Hans-Cuff. Genius and Son 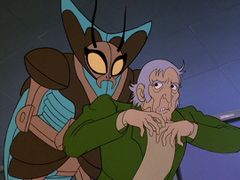 Braxis later built a Dimensional Interfacer for Cy-Kill, allowing him to bring Exor and her Insectoids to Earth. The creatures from the 21st level soon gained a solid bridgehead on Earth but Cy-Kill was unable to get rid of them, with Exor deciding she wanted the planet for herself. She then captured Braxis, who bargained for his life by bringing even more of her minions to Earth when the Guardians attempted to stop them. Invasion from the 21st Level, Part I However, once that was done she soon ran out of uses for Braxis and sent him to be imprisoned with the other humans, but he escaped. He struck a deal to release the captives Turbo and Scooter in return for safety. After getting them back to Leader-1, Braxis was allowed to stay free in order to honour Turbo's promise. However, Cy-Kill prevented Braxis from leaving Exor's hive, but the Guardians were able to reverse the Interfacer to send the Insectoids back where they came from before destroying the machine. Invasion from the 21st Level, Part II 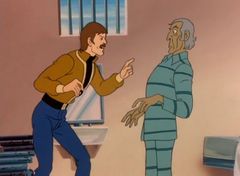 With Professor Von Joy unable to make any headway in neutralising the stealth device, so Matt suggested they ask Doctor Braxis for help. While Braxis wasn't incarcerated his mental health took a turn for the worse and he was committed to a maximum security mental hospital, where he was making all sorts of strange machinery to "prove" himself to UNECOM. Seeing Matt seemed to snap Braxis out of his delusions to some degree, especially when he heard his help is needed. Matt offered to have him reinstated at UNECOM and, while still unstable, he accepted. When Braxis arrived at UNECOM Headquarters, where his odd behaviour and lack of tact soon started annoying everyone. In between his less coherent moments he seemed to be making progress though, creating an array of satellites that would nullify the Renegades' stealth devices. Turbo, Scooter, A.J. and Nick were put on a convoy as bait, and Roguestar picked up their faked transmissions. However, Leader-1 had unwisely left Braxis in Professor Von Joy's care and he predictably immediately lost the human. He reappeared having mistaken the Professor's energy transducer for a toy, though Matt was able to catch it before they were all destroyed. However, Braxis skipped off again, meaning Matt and the Professor had to find him to activate the satellites when the convoy came under attack. He was found and was able to activate the satellites. However, they malfunctioned - while Matt, Leader-1 and the Professor believed it hasn't worked and returned Braxis to imprisonment it in fact began disintegrating Roguestar's molecular structure. Cy-Kill found out Braxis was behind the satellites and abducted him. Cy-Kill set him to work with Dr. Go on undoing the molecular breakdown, so Braxis moved Roguestar back among his satellites. The move stabilised Roguestar but Braxis vanished, having stolen a shuttle and escaped.Braxis Gone Bonkers

Cy-Kill and Doctor Braxis came up with a plan to wipe out the ASC's top scientists and cadets by tampering with the sticks of the Lixil Lions plastikice hockey team ahead of their final against the Oilers. However, Matt Hunter foiled the plan by decking Braxis, who was rescued by Cy-Kill before the inevitable retreat. Champions of Lixil Braxis later realised Halley's Comet could be used against Earth. However, Matt and Spay-C destroyed the gravity component the Renegades were using to bring the comet towards the planet. Collision Course Comet He and Cy-Kill dropped the dangerous everything-eating weeds of Calcheron on the ASC's Command Centre. While Matt was unable to stop the weeds Cy-Kill was foiled by his own impatience - he had chemically accelerated the growth of the plants, which then died out rapidly. The Weeds of Calcheron After Geeper-Creeper failed in a mission Cy-Kill listened to another of Braxis' plans. They recruited the Wagner Sirens from Wagner 11, forcing the creatures to use their sonic powers on the Command Center. However Matt, A.J., Turbo and Road Ranger were able to shield themselves long enough to turn the sonic waves on the Renegades, who retreated. The Wagner Sirens

Working on board Thruster with the Renegades, Braxis designed and built a phoron gun, which would invert the very molecules of Leader-1, turning the Guardian's own power against him. To tempt his archenemy into this fiendish trap, Cy-Kill had Pincher abduct Scooter and Nick. When Leader-1 appeared to save his friends Braxis prepared to hit him with the weapon but a quick-thinking Scooter projected a hologram of the Guardian leader, and it was beyond Braxis' short-term memory to keep the phoron gun pointed at the real one. Leader-1 promptly smashed the gun, grabbed his friends and scarpered as Braxis called for Cy-Kill - with Scooter swiping the weapons blueprints, substituting Nick's plans for A.J.'s birthday cake in their place.The Blast of Doom!

He later built a mechanical brainwashing ray that would convert Guardians to Renegades, with Path Finder as the first target. However their plans were monitored by Scooter, who was able to warn her and then made a gigantic magnet to trap the Renegade snatch squad and send them hurtling off into space. Braxis went to collect them in Thruster, after sending the Command Center a radio message informing them of this plan.Scooter's Mighty Magnet

Professor Braxis was a lecturer and expert in Gobotics at a college in America; he was so impressed by freshman A.J. Foster he invited her around for dinner and offered her the role of teaching assistant. He then decided to lock her in his cellar with his monstrous personal Go-Bot Vamp, who menaced the girl before she was saved by her own Go-Bot, Scooter. Scooter manhandled Braxis but then left with A.J. - walking straight into the Go-Bot rebellion. Vamp remained loyal to Braxis, and the pair watched with amusement as the rebels tortured Scooter and A.J.Issue 2

As the Go-Bots took over Earth and build Gobotron, Braxis went into hiding, building a whole army of Vamps which then went into suspended animation, with his decaying form inside one of them. A lifetime later, the Vamps were accidentally reawakened by Leader-1, Scooter, Turbo and the Guardians during their search for the Lazer Lance, and attacked them, with Braxis remembering Scooter after their tussle all those years before. However, the Vamps were scared off by the discovery of the Go-Bot god Courageous.Issue 4 While the Go-Bots were busy battling Zod and killing each other on Earth, Braxis took the Vamps to Gobotron and caused huge devastation to the planet. When the Command Center returned from Earth it was attacked by the Vamps, with Turbo, Scooter and Crasher left surrounded. They were saved by the arrival of Road Ranger, who bisected Braxis and made short work of his army. His skills greatly impressed the other Go-Bots, though he modestly credited Bug Bite, Staks, Zeemon, Destroyer and Baron Von Joy with helping him. Issue 5