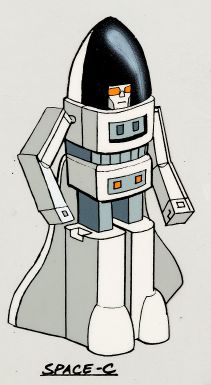 A longtime member of the Guardian forces, Spay-C (sometimes spelled Space-C) serves just as readily in combat as she does from behind a desk on the Spa Moon of GoBotron.

Spay-C converts into a NASA Space Shuttle orbiter, a mode which saw surprisingly little use for someone allied with a bunch of astronauts.

A member of the Guardian Council, Spay-C joined the council in choosing Zeemon, Leader-1, and Cy-Kill to serve as High Protectors after the end of the first Renegade revolt. Et Tu, Cy-Kill She continued to serve as a council member after Cy-Kill joined the Renegades; she was present to hear about the the fleet of Zods approaching the planet, The Final Conflict and stood on-stage with Zeemon to congratulate Leader-1's team for thwarting the Renegade conquest of GoBotron. Return to GoBotron

Spay-C was later found overseeing Spa Moon when a message from Leader-1 warned her of a suspected Renegade attack, leading her to set off a Renegade alert, which sent the relaxing Guardians into a panic. When Leader-1's team arrived in search of attackers, Spay-C incredulously replied that there were no Renegades, just a moon full of frightened spa-goers. The GoBot Who Cried Renegade 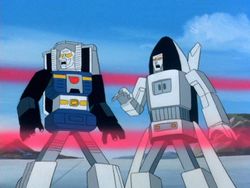 Excusing herself into a meeting between Fitor, Leader-1, and the UNECOM staff, Spay-C hand-delivered a message from Scooter, explaining that the other Guardian had reasoned that Leader-1 would be the only suitable candidate to test the new brainstormer—along with a note that "something odd" was happening on the planet Elba. Leader-1 tasked her with joining Turbo, Hans-Cuff, and the supposedly reformed Fitor and Geeper-Creeper to investigate, and Spay-C took the controls of a Command Center to navigate via hyperspeed to Elba.

On arrival, she followed Turbo's lead, though the desolate landscape gave her "the creeps". She was stunned by Cy-Kill's appearance from behind a rock, along with Royal-T and Street Heat, who the Renegade leader had hypnotized into his service. Captured, Spay-C and Hans-Cuff were similarly mesmerized, and, at Cy-Kill's command, re-boarded the Command Center and journeyed to Earth with Fitor and Geeper-Creeper, following Cy-Kill's instructions to make him appear to be their captive. When the deception fell through, Cy-Kill knocked her out with a hand-held blaster. Escape from Elba

Spay-C was called to action during Cy-Kill's first invasion of Earth. When Leader-1 ordered a hasty retreat, she rendezvoused alongside Zeemon outside the Command Centre. Space Wars

After forming an alliance with the Australian Army, Spay-C fought alongside her fellow Friendly Robots in a failed attempt to stop Cy-Kill's attack on a heavily populated city. She managed to retreat with Road Ranger shortly before the Army dropped a nuclear bomb, wiping out everything (and everyone) within a hundred kilometer radius. Unfortunately, the blast awoke the evil Rock Lord Pulvereyes, who knocked both Friendlies off their feet. Spay-C shortly recovered, only to learn that not only had Cy-Kill survived the explosion, but another potentially deadly enemy had arrived: the Narlies. Challenge of the Machine Men 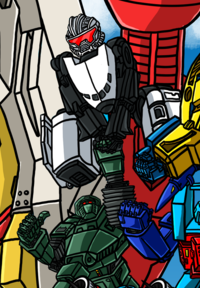 Fleeing the Cataclym that threatened their reality, Spay-C evacuated to Level 77 with several other Guardians, Renegades, and Rock Lords, where she took on a new form to blend in among the locals. Cultural Appropriation

Sky-Jack avoided one of the space-faring Guardians to hack into Earth's television transmissions via satellite, but Cy-Kill couldn't remember if it was Spay-C, Apollo, or Path Finder who nearly got in the way. Cy-Kill For President

On the planet Amazonia IV, Spay-C joined Small Foot, Sparky, A.J., and Anya Turgenova in a competition against the Renegades Vamp, Snoop, and Crasher to compete before an audience of Valkyries for an "object of great power". Working with Dr. Turgenova in a trial of wits, Spay-C devised a method of channeling water to a wheel, only for her hard work to be intercepted by Snoop at the very last moment when the Renegade diverted the flow of water. When the Guardians ultimately won the competition, Spay-C and her companions were pleased to discover that the prize was an ancient scroll of Amazonian wisdom about honorable conduct. Ladies Night

Spay-C later journeyed with A.J. and Scooter to Arcanus IX, where they recruited the wizard twins Hocus and Pocus to oppose Cy-Kill's own spellcasting allies, Mumbo and Jumbo. The evil wizards overpowered, Spay-C personally flew them back to Arcanus IX, bound in iron chains—and if Cy-Kill's account is to be believed, lecturing them throughout the journey. Mumbo Jumbo

In an unstable hybrid universe that incorporated both GoBots and Transformers, Spay-C was attacked by the Decepticon Ramjet. As she fell from the air, she collided with Good Knight, causing both Guardians to be critically injured. Echoes and Fragments 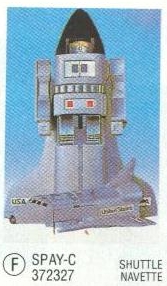 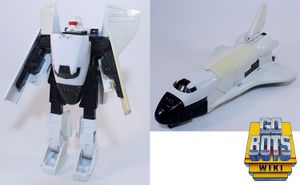 Reconceptualizing the Machine Robo Big Shuttle Robo toy as another form of Spay-C for the Super GoBots subline, this figure also converts from (a noticeably different) robot to space shuttle.

The fifth toy from the second wave of figures, Space Shuttle Man was released by Bandai Australia in 1983. She remained identical to the original Shuttle Robo toy, albeit packaged on a blue backing card.

In 1984, the figure was re-released with her GoBots name and faction on a new black backing card depicting a yellow-tinted alien landscape.

A carded repackage of Shuttle Robo, the figure now known simply as Space Shuttle was released by Bandai Europe at the end of of 1983.

Produced by Monogram, this model kit featured a pull-back motor in shuttle mode. Spay-C's robot mode and conversion pattern are very similar to those of her regular size toy. 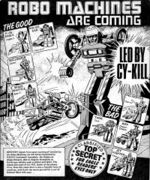