Doctor Anya Turgenova is a scientist ally of the Guardians, hailing from the Soviet Union, and inventor of sorium. Her intelligence was only matched by her fervent belief in Soviet doctrine, though actual exposure to capitalist pigs made her realise they weren't all that evil, and as such her scientific genius has since been shared with UNECOM on several projects. 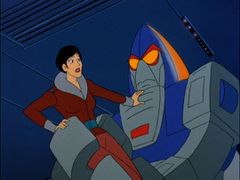 When the Renegades and Doctor Braxis needed the synthetic energy crystal sorium for their pulsar generator and head to Stolbovoy Island where its' inventor, the brilliant Russian scientist Anya Turgenova, was conducting her research. The Guardians and their human allies overhear their communications and head out to intercept but Thruster arrives first and Zod scared off the Red Army garrison guarding the island. The Renegades easily captured her and took the sorium crystals before the Guardians arrived and a battle broke out. Anya attempted to escape but was recaptured by Crasher before she was trapped in a cave with Leader-1, Matt Hunter, A.J. Foster and an unstable sorium crystal as Cy-Kill and Cop-Tur left the island. Target Earth Turbo, Scooter and Nick Burns were able to rescue them with the Command Center, Leader-1 having used his forcefield to save them. Despite her rescue, Anya remained convinced the whole business was an imperial American plot. Leader-1 asked Matt to take her to Cheyenne Mountain to warn the US military of the threat, a situation neither of the humans were particularly enthused with. With no option they went along but thanks to Geeper-Creeper the base was already under the command of Cy-Kill, and the pair fell under the influence of the pulsar generator. Onboard Geeper-Creeper, Anya joined the human race in hunting down the Guardians. Conquest of Earth While Leader-1 was captured, Turbo and Scooter remained free, later releasing Matt, A.J. and Nick from Renegade control too. Matt and Turbo then set off to rescue Anya, managing to grab her from among the controlled humans. Earthbound Matt was able to restore Anya to her normal self and she was able to help them given Leader-1 a power boost after his run-in with Zod. The Guardians and their allies were then able to get inside Cheyenne Mountain and begin to overthrow the Renegades, with Anya even grabbing a gun to help Leader-1 and Matt knock Cy-Kill off a gantry. With the Renegades defeated and their armada of Zods destroyed when Leader-1 uses the Astrobeam to send unstable sorium into their midst, she shared a kiss with Matt before the Guardians and their human friends decided to run for it on the Command Center rather than explain everything to General Lindley and the rest of the Cheyenne Mountain staff. The Final Conflict 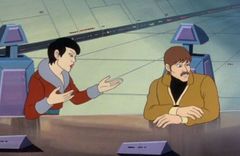 If Anya's romance with Matt went any further they remained professional in the workplace as both worked with the newly-formed UNECOM, where she became one of the organisation's foremost brains, realising that contrary to Soviet propaganda the West wasn't particularly evil. She was present at UNECOM Headquarters when Scooter and Nick called in with a sighting of an uncharted Renegade base before they were shot down and stranded on a primitive world. Unlike General Newcastle she was concerned about the pair being in danger. Dawn World She later devised the new Enigma Device, a signal scrambler created for UNECOM, but it was soon stolen by the Renegades. Forced Alliance Anya would still return to Russia, and reported to UNECOM when Cy-Kill raided a mine in the country, a development that helped push Leader-1 into ordering a comprehensive search for the Renegade mothership Roguestar. Quest for Roguestar She was again at the UNECOM HQ when Cy-Kill used Trindle technology to send all the personnel inside asleep, before they were eventually thwarted by the Guardians and their allies Trevor and Troilene. The Renegades' Rampage, Part II 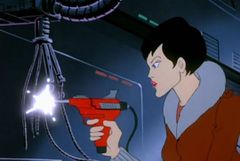 Anya was then one of the major brains behind the robot warrior Sentinel; however, as soon as the machine came online it decided humanity was inferior and needed to be wiped out, as these things often do. She reported on her invention's path of carnage as it was manipulated by Cy-Kill before finally being battled by the Guardians in Courageous and then leaving the planet to chase the treacherous Renegades. Not her best day. Sentinel After Cy-Kill was captured by the Guardians she was present as Fitor and Geeper-Creeper tried to persuade UNECOM they were defecting to the Guardians. As such they allowed Anya to use a stealth device they were handing over on herself; she found the sensation curious and looked forward to examining it more closely. However, like the Renegades' defection it was all a trick and the device blew after only a couple more tests, by which time Cy-Kill had escaped with the ersatz defectors. Escape from Elba Again working for UNECOM, she oversaw a new state-of-the-art surveillance facility - however, it was soon targeted by Fitor, Bad Boy, Stinger and Stallion. Anya joined the Guardians and their allies in defending the base, grabbing a gun and opening fire on the Renegade attackers. Fitor was captured but while repairs were undertaken on the base Cy-Kill, Cop-Tur and Crasher captured Scooter, Matt, Anya, Nick and A.J. to barter in exchange. Despite Cy-Kill attempting to double-cross Leader-1 at the subsequent prisoner exchange Anya and the others were eventually able to get free. Fitor to the Finish 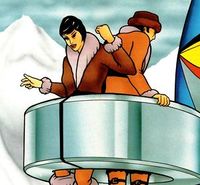 Anya attended the International Convention of Scientists in Desert Springs, where she was targeted for kidnap by Doctor Braxis and the Renegades. The disgraced scientist waited in her room, planning to hide her in her packing case and smuggle her to the waiting Cop-Tur but Nick was able to warn Anya before she entered her room. Instead Matt is able to overcome Braxis and put him in the case, which is then taken by the unwitting Cop-Tur. The Aliens Steal a Scientist

Later she was back in Russia working on something called Project X when she investigated dinosaur sightings in Siberia along with Brigadier Boris Bulkanikov. Unknown to them, Project X had been targeted by Cy-Kill and the dinosaur was in fact the new Renegade weapon Zod, which shot down and swallowed their plane. The pair were then used as hostages, with Cop-Tur threatening to kill the humans if the Guardians didn't surrender Battle Suit. Throughout all of this Bulkanikov seemed more concerned with the sleights against his authority and Anya's friendships with Westerners, while Anya was more practical, attempting to warn the Guardians about the existence of Zod. Thankfully the Renegade charged with crushing the humans was Cop-Tur, and when Turbo said they would had over the Battle Suit he immediately let the captives go, allowing them to run to safety while the Guardians simply attacked the Renegades. The pair were then returned to Russia, with Anya convincing Boris to keep the whole escapade from their superiors. The Capture of Comrade Boris 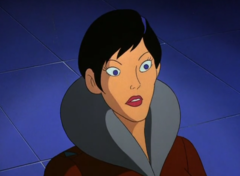