The Guardians pursue the Renegades to a distant world known as Earth. 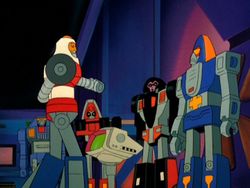 In the far reaches of the Milky Way, the metallic planet of GoBotron is at war. Its native population, the GoBots, are split into two factions: the benevolent Guardians, who rule GoBotron, and the evil Renegades, who seek to conquer it. In his latest bid for power, Renegade leader Cy-Kill and his minions Crasher and Cop-Tur steal the Guardians' Astrobeam teleport device and make their escape using their race's ability to convert their mechanical bodies into vehicle forms. Guardian security officer Hans-Cuff attempts to stop them, but is taken out by Crasher's energy shockwave powers. Returning to the Renegade Fortress, Cy-Kill explains his scheme to his assembled troops: knowing that the Renegades' foothold on GoBotron is on the verge of crumbling, he plans to relocate to the far-off planet Earth, where a human ally he has already made contact with will help them establish a new beachhead from which they can strike at their homeworld. 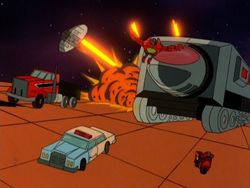 At Guardian headquarters, military commander Leader-1 proposes a final strike on the Renegades' fortress to purge GoBotron of the villains once and for all. Zeemon and the Guardian Council agree, and the Guardians soon launch an all-out attack on the fortress. Cy-Kill appoints his second-in-command Fitor in charge of operations on GoBotron and leaves him to direct the Renegade army while he, Crasher, and Cop-Tur leave for Earth aboard a Thruster. Before Cy-Kill departs, Fitor requests permission to unleash the giant, feral monster Zod on the Guardians, but Cy-Kill refuses, as he will require Zod for his own plans in the near future. Tracking the trajectory of Cy-Kill's Thruster as it flies off, timid Guardian engineer Scooter deduces his destination, and Leader-1 takes him and Turbo in pursuit of the villains aboard a Command Center. 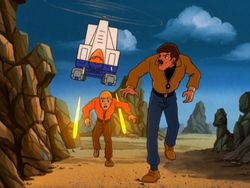 In Earth orbit, astronaut Matt Hunter takes new recruits Nick Burns and A.J. Foster on a mission to repair the Argos communications satellite, overseen from operations control down on Earth by prickly scientist Doctor Braxis. Once the job is complete, they are preparing to return to Earth aboard their shuttle the Intrepid when they witness the emergence of the Renegade Thruster from hyperspace, demolishing the Argos in the process. Unable to detect the huge spaceship on their scanners thanks to its stealth device, Braxis and General Newcastle don't believe Hunter's claims; consequently, Hunter disobeys orders to return to base and sets off in pursuit of the Renegade vessel. Cop-Tur detects the Intrepid, and Cy-Kill, desiring no witnesses to their arrival, has him land Thruster in the desert so they can exterminate their human pursuers without being seen. Once Thruster has landed, Cop-Tur shoots down the Intrepid, and he and Crasher chase the three humans across the desert. Fortunately, the Guardians soon arrive to aid the humans, but this forces Cy-Kill himself to join the fray, and a shot from the Renegade leader badly damages Turbo. Leader-1 shields both his fellow Guardians and the humans from Renegade fire using his personal forcefield, but just as his power has almost completely drained away, Scooter detects the approach of a large group of humans: a unit deployed by General Newcastle to arrest Matt, A.J. and Nick. The Renegades and Guardians both withdraw before they can be seen, leaving the three humans who have witnessed their fight helpless to convince their superiors of what has occurred. 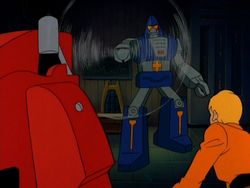 Suspended from duty, the trio retire to Matt's house for the evening, where, under cover of darkness, Leader-1 approaches them with a request for aid. The Guardian leader doesn't actually bother to wait for an answer, scooping up the three humans and taking them back to the Command Center, where he explains that they require help acquiring the electronic components necessary to save the injured Turbo's life. A.J. and Nick are keen to help, and Matt extracts the promise from Leader-1 to help reinstate their reputations with NASA after all is said and done. Scooter accompanies Nick to obtain the necessary components from NASA's electronics warehouse, but as they are about to head back to the Command Center, Scooter's sensors detect Renegades in a nearby building. Eavesdropping through a skylight, the pair observe Cy-Kill, Crasher, and Cop-Tur meeting with Cy-Kill's human ally... Doctor Braxis! In return for Cy-Kill's promise that the Earth will be his to rule when the Renegades have left, Braxis provides them with information on the location of an energy crystal known as sorium. Just as Braxis hands the documents over, however, the skylight gives way under Nick and Scooter, and they come tumbling inside the lab! Cy-Kill instructs Cop-Tur to attack, and the Renegade menacingly advances... 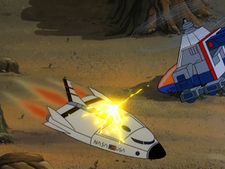 Leader-1: "The time has come to put an end to Cy-Kill and the Renegades once and for all!"
Turbo: "Leader-1's right! We've sat on our circuits long enough!"
Zeemon: "The Guardian Council is in full agreement, Turbo. What do you propose, Leader-1?"
Leader-1: "An assault on the Renegade fortress tonight!"
Scooter: "U-uh, tonight? A-aren't we being a little hasty?"

—The GoBots in: Sketching in Character Personalities 101

"We must not panic your people."
"Panic? You want to see panic, just wait'll I try and explain what happened to this shuttle!" 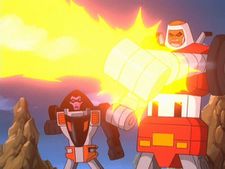 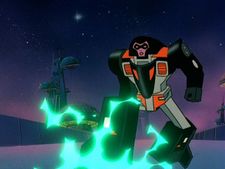 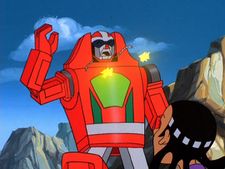