Cy-Kill attacks Cheyenne Mountain, using a sorium-powered device to seize control of the minds of every human on Earth. 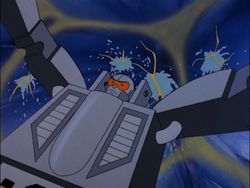 Cy-Kill and Cop-Tur set Thruster on course for Cheyenne Mountain with Zod following them via seabed. The monster's passage is observed from the submerged Command Center by Nick and Scooter, but Zod's departure brings Scooter no joy, as he believes Leader-1, Turbo, Matt, and A.J. have been slain in the sorium explosion. Fortunately, he is soon made to eat his words when a communication from Turbo comes through the Command Center's console: Leader-1 has used his forcefield to save them from the blast, but they are now buried alive, and the field is giving out! Using the Command Center's tractor beam, Scooter hauls his friends to safety, then, at Leader-1's direction, does the same for Crasher—though in her case, it is the captive Anya Turgenova, still within Crasher's cockpit, that they are seeking to rescue. Once hauled to safety, the doctor is not exactly grateful to find herself surrounded by more alien robots and "imperialist" Americans! 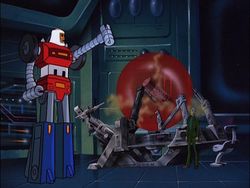 In the forest around Cheyenne Mountain, aboard Thruster, Doctor Braxis puts the final touches to his pulsar generator, a mysterious device powered by the sorium obtained by Cy-Kill that the Renegade leader intends to hook up to the satellite transmitters within the mountain's NORAD defense installation. Cy-Kill Astrobeams Geeper-Creeper in from GoBotron so that Braxis can use his military jeep alternate mode to enter the base and open it up to the Renegades. Braxis is already reluctant to put himself in harms way, but finds himself with little choice in the matter, and Geeper's manic driving doesn't make the journey a gentle one!

Aboard the Command Center, the Guardians and their human allies subject the captive Crasher to a mind probe to learn Cy-Kill's plans. She resists at first, recalling memories of demolition derbies on the GoBots' homeworld and her old crush on Leader-1, but eventually, the image of Cheyenne Mountain is plucked from her thoughts. Matt contacts General Lindley at the NORAD base to warn him of the impending Renegade attack, agreeing to turn himself in if the general will hear him out... but unfortunately, Geeper and Braxis have already made it inside and taken care of a chunk of the security force. The evil pair open the facility's security doors, and Cy-Kill and Cop-Tur come storming in with the pulsar generator, quickly subduing all resistance and taking control of the base. 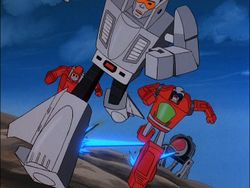 The Guardians soon arrive in Colorado and set the Command Center down behind a waterfall. Leader-1 insists Matt take Anya with him to Cheyenne Mountain to verify his story, but Matt isn't wild about taking an agent of a foreign power into a top-secret military facility. Observing the two humans' approach on a security monitor and realizing that the Guardians must have also survived the sorium explosion, Cy-Kill permits Matt and Anya access to the base and then immediately takes them captive. When they refuse to give up the Guardians' location, Cy-Kill reveals the power of the pulsar generator: it projects a wave that enthralls Matt and Anya's minds, along with the minds of every human in a five-mile radius—save for Braxis, protected by in-ear frequency neutralizers—and places them under Cy-Kill's control. Even Nick and A.J. fall under Cy-Kill's power, and at the Renegade leader's order to "Destroy the Guardians," the mesmerized Nick releases Crasher, who overpowers Scooter and takes control of the Command Center, turning its weapons on the Guardians. The Guardians attempt to flee, but are boxed in by Cop-Tur, Geeper, and NORAD's security forces, who have been led to their location by Matt and Anya. As Braxis links the pulsar generator to NORAD's satellites, spreading its effects across the globe and ensnaring the minds of every human on Earth, Leader-1 orders Turbo and Scooter to retreat while he covers their escape. The pair are reluctant to abandon their leader, but he insists; alas, no sooner have they left than a blast from the Command Center knocks Leader-1 out of the sky, and he is taken captive by Crasher! 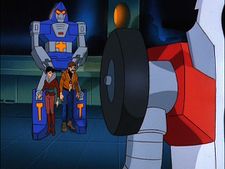 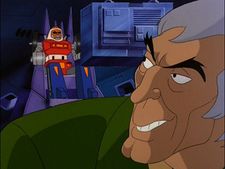 Turbo: "What's NORAD?"
Anya: "The North American Air Defense Command."
Nick: "Whaddayou know about it?"
Anya: (scoffs) "The People's Republic knows plenty! We did not just fall off the truck filled with pumpkins, you know!"

(Braxis is thrown around wildly by Geeper-Creeper's crazy driving)
"Aaaaaah! I'm going to tell Cy-Kill about this!"
"Hahaha, fine! He could use a good laugh!"

"Let me do the talking, comrade."
"Nyet! I can talk the English good!"

"Wait just one moment... my frequency neutralizers. You wouldn't want me to turn into a zombie, now, would you?"
"Frankly, it would improve your personality." 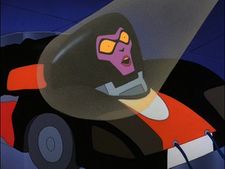 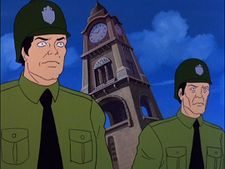 2011 — Challenge of the GoBots — The Original Miniseres (Warner Archive Collection, US)