Events in italic text are flashbacks 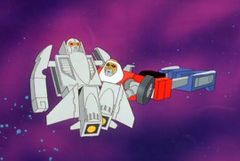 Leader-1, Turbo, Treds and Tri-Trak are in pursuit of Cy-Kill in a canyon on Garleon[1], but he leads them into a trap - Crasher and Cop-Tur are waiting and open fire. The Guardians scatter and take cover, but are pinned down - Tri-Trak is hit while Crasher and Cop-Tur cause an outcrop to collapse on Turbo. However, Leader-1 and Treds are able to return fire, while the arrival of Scooter, Matt, Nick and A.J. in the Command Center forces Cy-Kill into a retreat. Leader-1 digs Turbo out and the Renegades get back to Thruster and engage their stealth device. Tri-Trak needs repairs while Nick finds one of the weapons the Renegades were using - a reduplicator, which Leader-1 recognises as an old weapon used by Parthian[2] raiders, something he hasn't seen since the last time he and Cy-Kill fought together as Guardians. Nick is curious but Scooter tells Leader-1 there is still a power source somewhere on the planet, so he takes Turbo and Treds to investigate. Scooter tells the curious group left behind, including an injured Tri-Trak, about the events a long time ago...

Just after the defeat of the first Renegade Revolt, the Guardian Council chose three of its' members to serve as High Protectors - the skilled and courageous pair of Leader-1 and Cy-Kill, and the great warrior Zeemon. GoBotron comes under attack from Parthian raiders and Leader-1 is hit, but caught by Cy-Kill before he can crash. Together they shoot down the Parthians' ship, capturing the raiders, and are hailed as heroes. Cy-Kill notes that the crowd would give them anything, but Leader-1 simple believes the population is glad the battle is over. Zeemon and Council members Blaster and Heat Seeker[3] greet them, though Cy-Kill is unhappy with how little of the dirty work they do; he suggest to Leader-1 that they join forces and take over GoBotron to accomplish lasting peace, but Leader-1 again disagrees. The Council reconvenes, and the Guardians still have three major concerns during difficult times for GoBotron - further Parthian raids, scattered Renegade guerrillas and the security of the crucial mines at Garleon. Believing himself to be the greatest GoBot, Cy-Kill successfully argues that he should be given the task of rounding up the remaining Renegades, while Zeemon offers to lead an attack on the raiders' base on Parthis[4]. Leader-1 meanwhile volunteers for the less glamorous job of guarding the mines on Garleon. The three High Protectors prepare to go, and Leader-1 gives Cy-Kill a power chip from one of the Parthian reduplicators as a token of his friendship. Leader-1 and Treds then arrive over Garleon, where half of the planet has already been mined out to provide materials for GoBotron. Elsewhere, Dart detects a group of Renegades on Xeros[5] and informs Cy-Kill. Along with Bullseye they head in to attack but Loco and Hornet detect their approach and activate the Renegade base's defences. Loco is shot down by Cy-Kill but the surprise appearance of Zero, Bugsie and Klaws sees both the High Protector and Dart damaged. Zero lands and gloats over the downed Cy-Kill. 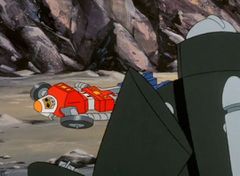 Dart is able to revive and get Cy-Kill clear before Zero can land a killing blow. They return to the Command Center as Cy-Kill admits the Renegades are much stronger than he thought. On Parthis, Zeemon's fleet arrives and begins the search for the Parthians' vast underground stronghold of Tessafon[6]. He, Moto-san and another Guardian[7] comb the planet but are ambushed by the Parthians' defences. Zeemon tries to lead a retreat but is shot down and cannot convert; nevertheless the Guardians are able to escape. On Garleon the Renegade terrorists Crasher, Cop-Tur and Geeper-Creeper prepare to attack the mining operation. The Guardians spring into action but the Renegades nearly drop a huge piece of machinery on Leader-1 - only for him to be saved by a miner, who introduces himself as Turbo. Together they counterattack, capturing Crasher and Cop-Tur. The Council reconvenes on GoBotron; Zeemon announces that as penance for his failure on Parthis he will not be repaired, giving up his ability to convert. Another Councillor[8] wonders what Cy-Kill will give up after his defeat on Xeros, and the High Protector reacts furiously as Zeemon tries to calm him. At that moment a message arrives from Leader-1, telling of his success on Garleon. Leader-1, Turbo and Treds are greeted as heroes, further fuelling Cy-Kill's envy and frustration. Zeemon greets them and the other Councillor further acclaims Leader-1, pushing him as a candidate for overall leadership of GoBotron. Fitor suggests he has the right idea but the wrong GoBot; Cy-Kill is furious and claims he should instead lead the planet, but Leader-1 objects to both, believing no GoBot should ever be master of another. Begrudgingly, Cy-Kill publicly agrees -with the qualifier that it will remain so while both he and Leader-1 survive. Cy-Kill later visits the imprisoned Crasher and Cop-Tur, offering to set them free if they destroy Leader-1 - though he reacts strongly when Crasher badmouths his fellow High Protector, blasting her at point-blank range. 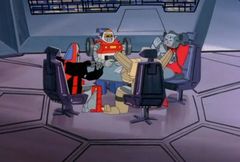 Scooter's story to Nick, Matt, A.J. and Tri-Trak is interrupted when Leader-1 radios in to report the discovery of the energy source in one of the old mines on the planet. While they stay on standby Scooter resumes his story...

With his plan in motion Cy-Kill searched out further allies, putting his proposal to Fitor, Dart and Bullseye. Bullseye is disgusted and walks out but the other two join him. At the next Council meeting Cy-Kill is further criticised and alienated, walking out despite Leader-1's pleas. Meanwhile Bullseye informs the Council of Cy-Kill's plotting but he has already freed the Renegade prisoners, telling the pair they are now in his debt. Elsewhere, the Council vote down plans to demote Cy-Kill. In an apparent gesture of thanks Fitor and Dart take Leader-1 to meet with Cy-Kill in the Hall of Columns. However, when he gets there he's ambushed by Crasher and Cop-Tur. Fitor and Dart turn on him as well; he manages to escape and find Cy-Kill, telling his fellow High Protector of the defections - only to be shot down by Cy-Kill, who confirms he is no longer a Guardian either. Guardian back-up arrives but Cy-Kill escapes along with the prisoners and the defectors.

As Scooter finishes his story, Nick asks where he was in all of this, and he tells them that would be a whole other story. Meanwhile Turbo calls in to report that the power source they have been chasing is a Parthian energy chip - the same one Leader-1 was given by Cy-Kill and lost in the mine all those years ago. Realising this, Leader-1 takes a moment before putting it back inside his chest.

(characters in italics are only present in flashback scenes.)

—Turbo's first impression of Crasher would not last.

-The last words Leader-1 and Cy-Kill exchange before becoming arch-enemies. 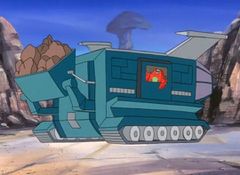 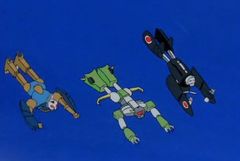 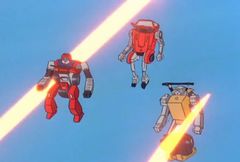