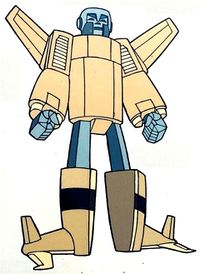 Bullseye is a loyal member of the Guardians, believing in their values to such an extent that he turned down a chance to join the Renegades with his former commander Cy-Kill.

Back in the days when Cy-Kill was a Guardian, Bullseye was part of this unit, assigned by the Guardian Council to mop up the remnants of the Renegade army following their unsuccessful revolt. However, the Renegades - led by Zero - were stronger than expected, and drove the Guardian force away. On his return to GoBotolis, Cy-Kill began to grow disillusioned with the Guardians. He sounded his troops out about defecting to the Renegades at a card game in their quarters later but while Fitor and Dart agreed, Bullseye objected, and stormed. He then tipped off the Guardian Council, and along with Treds was sent along to prevent the trio of defectors from collaborating with the captured Crasher and Cop-Tur to assassinate Leader-1. While they were successful, Cy-Kill and his followers were able to escape."Et Tu, Cy-Kill" 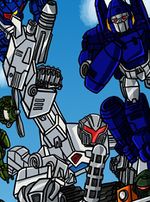 During the Diaspora, Bullseye was dispatched to Level 77 along with an assortment of Guardians and evil Rock Lords. Cultural Appropriation

Bullseye, Dumper, and Pumper were on patrol in Command Center 6 when they locked onto Cy-Kill shortly after his Zod invasion fleet from Earth failed. They engaged him with Command Center 14 and, while Mach-3, Dozer, and Dumper were injured and CC14 destroyed, they managed to capture the Renegade overlord. Little did they realize that was exactly what he wanted... The Long Game Bullseye worked with Leader-1's team when Cy-Kill created doubles of his crew with the Duplicator Beam. Bullseye and Turbo found Cy-Kill in the cells of his own Thruster after "Cy-Kill Prime" attempted to overthrow his progenitor. The Renegades joined forces with the Guardians to reverse the beam's effects and eliminate the Renegades Prime. Mirror Menace Bullseye and Klaws were among the GoBots mesmerized by Doctor Braxis's Destabilizer Cannon upgrades. They stood guard over Cy-Kill, who retained his free will so that Braxis could gloat to someone. Once Braxis Twice Shy Part 2

Sideways and Gong attempted to have some fun by mingling a GoBots reality with a Transformers reality during the events leading to the latter's first encounter with Unicron. As a result, after the battle of Autobot / Guardian City on Earth, the two heroic factions found themselves seamlessly integrated while carrying out a version of the Transformers' history. Motosan and Bullseye assumed the places of Perceptor and Blurr as the new commander Major Mo led them, Springer, Arcee, Nick Burns, and A.J. Foster in fleeing Galvatron's strike force. After an emergency separation of their Command Center, the heroes crash landed on the planet of rock, Quartex, where they encountered Galvatron's forces again as well as a group of Rock Lords. Echoes and Fragments 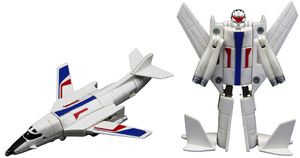 GoBots Bullseye converts from robot to Rockwell B-1 Lancer bomber plane in six steps. His toy was based on an unreleased prototype created for the Machine Robo line and was never released in Japan. While Bullseye's arms theoretically have excellent articulation at the shoulders they rely entirely on friction to hold them in position; therefore on many loose examples they just flop loosely in front of his torso. His ankles are also often found with severe wear. At least the jet mode's wings can move... For reasons that are not entirely clear he has "Bulleye" (sic) stamped under his wing, something which is unique for a toy from the range. 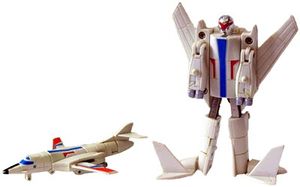 Robo Machine Bullseye features different wing stickers to the American release, roughly switching the red and blue over while also changing the cockpit from black to blue paint.