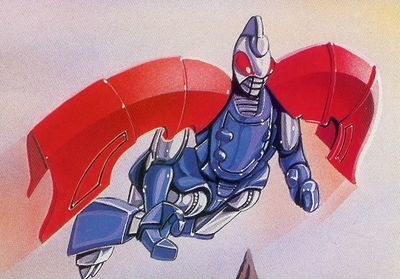 A mercenary through and through, the fickle Klaws will sell his services out to whoever he thinks will benefit him the most. In the past, he's worked for Cy-Kill's forces and has even served the Master Renegade after abandoning the Renegade leader. When things are going south, Klaws tends to cut his losses and throw allies under the bus, abandoning even his fellow Monster GoBots in the dash to save his own skin. 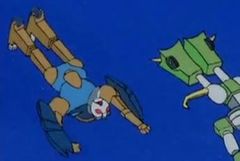 Klaws took part in the first Renegade Revolt, but when it failed he succeeded in escaping to Xeros along with Zero, Bugsie, Loco, Hornet and perhaps others. This was known to the Guardian Council and so High Protector Cy-Kill took on the job of purging the Renegades from Xeros, taking Dart and Bullseye with him. However, Hornet and Loco detected their approach, and while the Guardians attacked the base's defences Zero led Klaws and Bugsie to attack them from behind, shooting down Dart and isolating Bullseye. Cy-Kill was nearly killed by Zero before escaping, and the failure of the attack started Cy-Kill on the path to defecting from the Guardians to the Renegades."Et Tu, Cy-Kill" 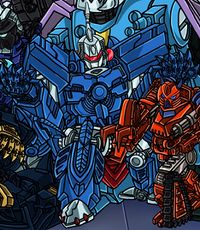 Klaws, Bugsie, and Hornet left the Renegades after Cy-Kill took command so that they could search for the Master Renegade. Renegade Rhetoric, 2015/10/15 When the Master Renegade resurfaced, they served as his henchmen when he launched an attack on Gobotron; while watching the destruction of Gobotron's prison moon, the Robo Rebels took the opportunity to sneak past the dazzled Monster GoBot. Graduation Day At some point after this, the Monster GoBots defected back to Cy-Kill, and the Renegade leader welcomed them into the fold. Renegade Rhetoric, 2015/10/15 After Cy-Kill caught wind of a Guardian plan to manufacture Space Hawk interceptors, the Renegade leader ordered Klaws, Fitor, and Gunnyr to launch a three-way attack on the production facilities. They successfully attacked and saw off the Guardian Boomer units that had been stationed to defend the factories. The Hawks of Space Part 1 Klaws was one of the Renegades taken over by Doctor Braxis and the secret mind-control circuit in his Destabilizer Cannon upgrade. He was guarding the imprisoned Cy-Kill, Fitor, and Gunnyr with Bullseye when the circuit was disabled. Regaining his senses, Klaws freed his leaders and the Renegades escaped. Once Braxis Twice Shy Part 2 Cy-Kill Astro-Beamed Klaws and Slicks to Illinois to chase after Nick Burns and Scooter, who were trying to protect an electronic growth serum from the Renegades. Klaws then took part in the attack on Fermilab, but was seen off by Scooter, who had temporarily turned into a giant. Attack of the 50 Foot Guardian On another mission, Klaws and Scorp pursued Man-O-War and Dive-Dive in an underwater battle that ended with a pod of sentient whales. Cy-Kill tricked the whales into believing that the Guardians were responsible for polluting Earth's oceans, which lasted until the Guardians launched a covert underwater mission aimed to defraud Cy-Kill before the whale king Leviathan. Scylla and Charybdis

As Sideways and Gong played with mixing universal streams, Klaws and the Monster GoBots worked for the Master Renegade on Antares III, sentencing hapless prisoners to death in the Dactyl pit. Klaws and Pincher escorted the last Starriors of Zi to their deaths before turning their attentions to Hot Rod and Kup. Klaws acted as executioner, pulling the switch which dropped the victims into the pit. Unfortunately for the Monster GoBots, Hot Rod and Kup started a whirlpool, drawing the water and the Dactyls up to the surface of the pit. As fighting broke out between the Autobots, Dactyls, and GoBots, Klaws found himself crushed under the entrance doors when the Dinobots and RoGuns arrived, toppling the door onto him. Echoes and Fragments

Klaws was one of the insectoid Go-Bots that appeared on Gobotron, the metal world built around Earth. When Spay-C arrived with six human astronauts he joined Pincher, Scorp, Hornet and Heart Attack in menacing the newcomers. However, the whole bunch of them were scared off by the arrival of Zod. Issue 3 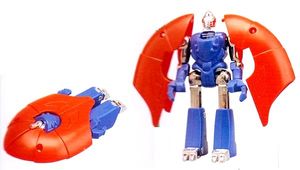 Klaws was released by Tonka in the third series of GoBots, and converts from robot to spaceship. Initially designed by Bandai for the Machine Robo line, likely as a Devil Invader, the figure was unreleased until the prototype was used by Tonka. As such, the figure was never released in Japan. Klaws' transformation largely consists of separating the two halves of the spaceship, though this does at least reveal a robot with shoulder, elbow and hip articulation - and an unusual thin avian-style head design complete with prominent comb. The spaceship mode had small caster wheels on the underside so it can be pushed along smooth surfaces. Klaws is a largely sturdy figure, with the shell halves securely connected; the only particular weak point is chrome wear on the feet and head. 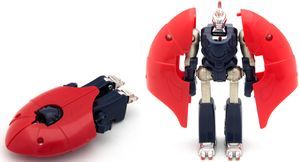 The European version of Klaws uses noticeably darker shades of red and blue compared to the American version. It is also considerably easier to find on the second-hand market.

The Australian version of Klaws was identical to the Robo Machine version and retained both his GoBots name and faction. He was repackaged and released by Bandai Australia on a black backing card depicting a blue-tinted alien landscape.