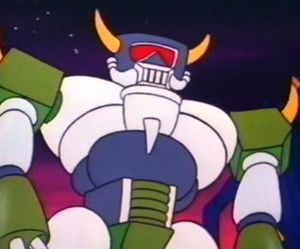 Bugsie is a Renegade of the Monster variety.

Bugsie took part in the first Renegade Revolt, but when it failed he succeeded in escaping to Xeros along with Zero, Klaws, Loco, Hornet and perhaps others. This was known to the Guardian Council and so High Protector Cy-Kill took on the job of purging the Renegades from Xeros, taking Dart and Bullseye with him. However, Hornet and Loco detected their approach, and while the Guardians attacked the base's defences Zero led Klaws and Bugsie to attack them from behind, shooting down Dart and isolating Bullseye. Cy-Kill was nearly killed by Zero before escaping, and the failure of the attack started Cy-Kill on the path to defecting from the Guardians to the Renegades. "Et Tu, Cy-Kill"

Many years later Bugsie was one of the Renegades that Cy-Kill brought to GoBotron to kidnap Solitaire. He took Nick and A.J. hostage to allow the Renegades to escape the attentions of Leader-1 and Heat Seeker as they returned to Roguestar and set course for Cordax. When they arrived Bugsie helped demonstrate Renegade superiority to Magmar, by driving off his rival Boulder's forces with heavy losses. When Cy-Kill failed to control the Power Scepter, Bugsie and the others beat a quick retreat rather than remain behind with their leader. Battle of the Rock Lords

Bugsie was consistently called "Klaws" during the Battle of the Rock Lords movie, including in the credits. He was also replaced by Klaws several times among the Renegades, typically in long shots. 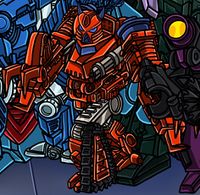 After the Robo Rebels defeated the Master Renegade's plans, Bugsie and the other Monster GoBots returned to the Renegades, and Cy-Kill graciously accepted them. Renegade Rhetoric 2015/10/15 When the Renegades found themselves forced by circumstances to put on a performance of "The Pirates of Penzance", Bugsie was Cy-Kill's second choice to play the Pirate King, for alas, Cy-Kill could not play both the King and the Modern Major General at once. Still, the Renegade leader thought Bugsie brought the appropriate panache to the role. The Show Must Go On Bugsie was one of the Renegades Cy-Kill brought to the Communication Moon of Gobotron when a modified Astro-Beam enabled him to teleport the moon to a site of his convenience. Unfortunately for the Renegades, Leader-1 was also on the moon. The Guardian commander disabled Bugsie and used his communicator to track the other Renegades and slowly take them out one-by-one. The Stolen Moon

As Sideways and Gong played with mixing universal streams, Bugsie and the Monster GoBots worked for the Master Renegade on Antares III, rounding up travelers and sentencing them to death in the Dactyl pit. Bugsie, Hornet, Scorp, and Bladez captured Hot Rod and Kup after they crashed, bringing them to the pit. Echoes and Fragments 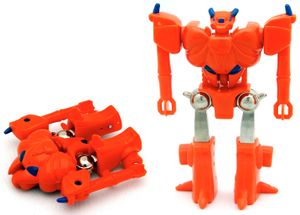 Bugsie was released by Tonka in the third series of GoBots, and converts from robot to monster car tank thing in 5 steps. Initially designed by Bandai for the Machine Robo line, likely as a Devil Invader, the figure was unreleased until the prototype was used by Tonka. As such, the figure was never released in Japan. The 'ribs' of the figure's chest, while made out of diecast, can snap due to the force needed to pop the chest into position. However - like fellow Monster GoBot Bladez - he has very good articulation for a toy of the period as a result of his abstract vehicle mode. 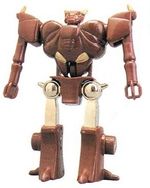 The European release of Bugsie looked considerably different from the American release, replacing the red primary colours with maroon and the blue details with gold. As with many late-run figures, the Robo Machine version is considerably easier to find second-hand than the GoBots version.

The Australian version of Bugsie was identical to the Robo Machine version and retained both his GoBots name and faction. He was repackaged and released by Bandai Australia on a black backing card depicting a blue-tinted alien landscape.