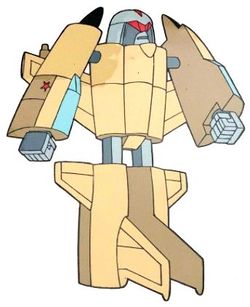 Gunnyr is a Renegade these days. He had been the self-styled Lord High GoBot of GoBotron's long-forgotten Level 17, where he got to live in a castle, wipe the minds of any GoBot who even questioned if there was more to the world than the bit Gunnyr controlled. Sadly for him a visit from the Guardians saw him out on his ear, and as such he wasted little time signing up with Cy-Kill for a chance of revenge.

The power-hungry Gunnyr took over the long-forgotten Level 17 of GoBotron. With help from his loyal lieutenant Bug Bite he devised the Brain Drain Chamber which wiped the memories of any unfortunate GoBots that strayed into his domain, also blocking their ability to change forms - only the two Renegades were immune. Gunnyr styled himself as Lord High GoBot of his own kingdom, getting an unwitting Ace to brainwash his subjects into believing the rest of GoBotron didn't exist. However, his conceit began to unravel when Scooter stumbled onto level 17. Initially Gunnyr assumed it was an invasion from the top-worlders but then found out Scooter had actually followed a transmission sent by Dart from level 17 itself. Scooter's absence attracted the attention of Leader-1 and Turbo but they were weakened by the Brain Drain, though Bug Bite mistakenly believed they were no harm and settled for chasing them off. However Scooter and Ace were able to disable the device, allowing a full-strength Leader-1 and Turbo to overcome the Renegades and free level 17. Gunnyr was shipped off to the Prison Moon along with Bug Bite.The GoBots That Time Forgot

Gunnyr later escaped and joined up with Cy-Kill's Renegades. He helped Sky-Jack attack a Guardian ore convoy; together they drew Leader-1 and Mach-3 away, forcing Matt Hunter to jettison the cargo intended for the rebuilding GoBotron. A similar raid on the next convoy produced another good result, with much damage done to GoBotolis as the Renegades attacked in full view of Zeemon and Man-O-War. However, the result made Cy-Kill overconfident and he planned a full-scale assault with all their remaining Thrusters. Gunnyr voiced concerns about this plan and got blasted in the chest for his troubles, ending up piloting one of the Thrusters that got shot down when the Guardians sprung a trap with their Command Centers, wiping out a huge chunk of the Renegade fleet.Mission: GoBotron 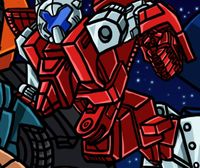 During the Diaspora, Gunnyr was dispatched to Level 51 along with an assortment of Guardians and Renegades. Cultural Appropriation

In Axiom Nexus, Cy-Kill recalled Gunnyr's time as Lord High GoBot of Old Gobotron's Level 17. Renegade Rhetoric 2015/10/19 Once he was captured by Ace and Dart, Gunnyr was sentenced to the Prison Moon of GoBotron. Seeing a gap in his command structure after Zero's betrayal, Cy-Kill approach Gunnyr about serving his cause. Deputy sub-commander of the Renegades was better than a prison cell, so Gunnyr quickly agreed. Renegade Rhetoric 2015/10/15 During a Guardian Academy training exercise, Gunnyr interrupted with Bad Boy and Stretch in an attempt to kidnap the Guardians' human allies. The cadets in training proved to be little resistance, but the arrival of Leader-1's team forced Gunnyr to retreat. Rebels Without A Circuit As the Guardians and UNECOM worked together on the new Space Hawk interceptor ships, Cy-Kill prepared to strike back. he tasked Gunnyr, Klaws, and Fitor with leading simultaneous strikes on the three production facilities. Unfortunately, Gunnyr was the least successful of the three, facing Leader-1's team directly. The Hawks of Space Part 1

Doctor Braxis once used the ruse of a Destabilizer Cannon upgrade to the Guardians' blasters to covertly install them with mind-control tech. Once the Guardians were under his control, Braxis summoned his secret Renegade partners to witness his accomplishment. Cy-Kill brought his sub-commanders Gunnyr and Fitor to view the UNECOM base Braxis had already captured with his Guardians. Braxis turned on the Renegades, however, trapping the trio in a force field while luring the other Renegades down to receive mind control upgrades as well. It was the free Guardians Turbo and Scooter who eventually shut down Braxis's plans, allowing Gunnyr and the other Renegades to escape. Once Braxis Twice Shy Part 2 After an accident with a Quantum Tunneling Shield led to Cy-Kill's disappearance, Gunnyr and Fitor began to disagree on the future of the Renegades. Gunnyr believed in the need for strong leadership, and wanted Fitor to officially declare himself Renegade leader. Fitor refused to give up on Cy-Kill, however, retaining only the role of acting commander while dedicating Renegade resources to finding their missing leader. The Guardians were becoming too bold without Cy-Kill around, striking at Renegade outposts over and over. Gunnyr finally disobeyed Fitor's mandates and assembled his own Renegades to counter-strike the Guardians. The conflict escalated to a final battle for the fate of Rogue Star, when Cy-Kill finally returned. With new reinforcements to bolster the Renegade ranks, the tide turned and the Guardians ultimately retreated. Cy-Kill smoothed over relations between Gunnyr and Fitor afterwards. He praised Fitor for his dedication and loyalty, but also commended Gunnyr for his strategic insight. Opportunity Knocks Part 1 Opportunity Knocks Part 2

When Zod temporarily received super-intelligence in an accident, Cy-Kill was delighted. However, the brute was now smart enough to consider betrayal, and browbeat several Renegades into helping him. After the Renegades captured a sizeable percentage of the Guardian fleet at a service depot thanks to Zod's planning, the beast intended to lure Cy-Kill, Fitor, and Gunnyr onto one of the captured Command Centers before blowing it up. A stray blast from a Guardian counter-attack hit the Command Center first, though, detonating it and revealing Zod's treachery to Cy-Kill. In Zod We Trust

For their own amusement, Sideways and Gong played with reality so that elements of a Gargent stream blended in and out of a Primax stream. In this amalgamated universe, Gunnyr was a Renegade who attacked a Command Center on its way to Autobot City on Earth. Echoes and Fragments 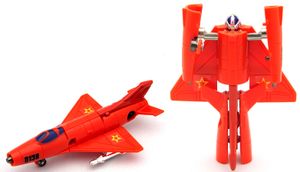 Gunnyr was released by Tonka in the third series of GoBots, and converts from robot to Mikoyan-Gurevich MiG-21 "Fishbed" jet fighter in 4 steps. Initially designed by Bandai for the Machine Robo line, the figure was unreleased until the prototype was used by Tonka, which perhaps explains its' relative simplicity compared to many other designs in the line. As such, the figure was never released in Japan. His shoulder joints have good articulation but are prone to wear. 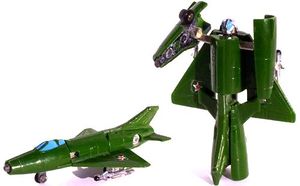 Despite the card-back and some catalogues showing the American version of the figure, the European version of Gunnyr replaced all the figure's red plastic and paint with dark green.

The fourth toy from the seventh wave of figures, Gunnyr was released by Bandai Australia in 1985. It used the same colour scheme as the European release.