The GoBots That Time Forgot

Down to Gehenna or up to the Throne, he travels the fastest who travels alone. 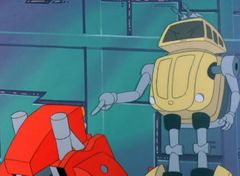 Scooter is setting up a new radio tracking system on GoBotron; it immediately detects something, and he traces the signal to Level 17 of Old GoBotron. He reports his findings to Leader-1 and Turbo, who dismiss it as impossible, as the older sections of GoBotron were sealed off and abandoned years ago, putting it down to a systems malfunction. Scooter wants to convince them so goes to an old Transit Capsule and heads down to Level 17 himself to investigate. He finds life down there but the locals run off scared when he tries to greet them. Guards then approach and open fire on him, destroying the capsule. Scooter tries to send a distress call but cannot get a reply before Bug Bite appears, calls the Guardian a "Topworlder", tells him his powers are being blocked and captures him. Above Leader-1 and Turbo realise where the missing Scooter likely is. Scooter is taken to meet the Lord High GoBot Gunnyr, who interrogates him, wondering why he is on Level 17, and has him imprisoned. Bug Bite queries whether he is a spy for a top-world invasion force, but Gunnyr assures him any Topworlders will be stopped by the Crystal Mountain blocking their powers. As Gunnyr and Bug Bite have scramblers fitted they can still convert, while Level 17 is further protected by an energy wall. Meanwhile Leader-1 and Turbo arrive above Level 17 and fly in under their own power; however, they strike the Energy Wall. 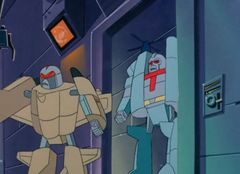 They drop down to Level 17 but find they can't convert or use their weaponry, and are soon menaced by a wild Zod. They are eventually able to cause a rockfall that pushes the monster into the energy wall. Scooter meanwhile is visited in his cell by a GoBot named Ace, who has never heard of Topworld and believes Level 17 is the entire universe. He believes Scooter is insane, but tells him his forthcoming DXing will sort him out; guards arrive and take Scooter to the Brain Drain Chamber. Elsewhere on Level 17 Leader-1 and Turbo are having no luck finding their friend, finding the residents as unhelpful as Scooter had done until one - Dart approaches them and tells them to follow him, just as Gunnyr's guards arrive - though Turbo is able to beat up their pursuers even without his weapons. Gunnyr meanwhile has found the reason for Scooter's initial visit, tracing the signal to Level 17. Realising he has a dissident somewhere in his kingdom, and tasks Bug Bite with finding the source of the transmission, while Ace is ordered to DX Scooter. Dart fills Leader-1 and Turbo in on the situation on Level 17, revealing that Gunnyr and Bug Bite systematically DX the minds of GoBots to maintain the fiction that they are Gods due to their abilities to fly and convert, which the others have forgotten other GoBots can normally do. However, as Dart has been to the edge of Level 17 and seen flying GoBots he realised that Gunnyr was lying and is plotting to overthrow him, though he lacks allies. Meanwhile Ace decides to free Scooter, believing he is telling the truth about Topworld, and the pair hide when Gunnyr returns. Dart meanwhile shows Leader-1 and Turbo his hideout - but Bug Bite and his guards are waiting inside for them. 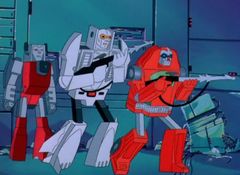 Turbo tries to fight back but Bug Bite's ability to convert gives him the upper hand. Scooter and Ace meanwhile are able to escape Gunnyr's palace thanks to a dose of good luck, hiding on a troop transport bound for the Crystal Mountain. Meanwhile Dart manages to convince Bug Bite that Leader-1 and Turbo are just ignorant peasants from the wasteland, which the lieutenant accepts; he takes Dart for DXing instead and the Guardians decide to head to the palace. Turbo and Leader-1 gain entry just as Bug Bite and Gunnyr are about to wipe Dart's mind, using weapons captured from the guards to bury them under debris before the trio escape, with Gunnyr and Bug Bite giving chase. At Crystal Mountain Scooter and Ace spot the situation on security monitors; the Guardian finds the central computer and realises it is projecting interference. A guard finds them and Ace tackles him; a stray shot hits the computer and destroys it - allowing the Guardians to access their powers. Scooter flies Ace to safety as Crystal Mountain self-destructs while Leader-1 shoots down Gunnyr and Turbo takes out Bug Bite. They are prepared for transfer to the Prison Moon as Scooter and Ace arrive. They all head back to GoBotron's upper levels, where Dart and Ace are enrolled as Guardians in return for their help and put through the Modifier, and convert for the first time. Leader-1 hopes they'll be more obedient than Scooter 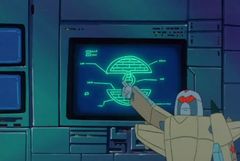 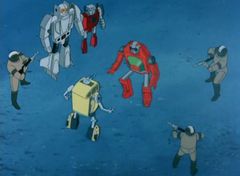 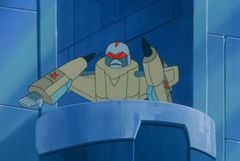 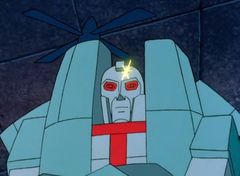