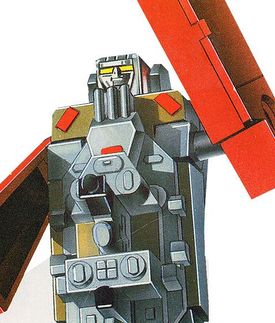 Man-O-War is a Guardian military officer who served as an admiral overseeing the fleet. He can be belligerent but is also very easily placated. 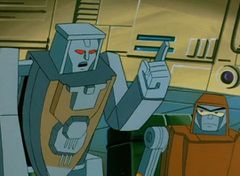 "And another thing - what is Leader-1 going to do about this guy's monobrow?"

In a meeting of the Guardian Council Man-O-War pushed for the Guardians to take a more aggressive stance with the Renegades in order to placate the population of GoBotron, especially criticising Leader-1 after a recent convoy full of construction materials destined for the planet. However, Zeemon argued for Leader-1 to remain in place. Man-O-War and Zeemon then watched from GoBotolis as a second convoy arrived over the planet; however it too was jumped by the Renegades, causing huge panels of metal to fall down on the city, causing huge damage and casualties. However, Ace was able to activate the city's defences from Dart's Command Center and Leader-1 was able to bring the situation under control. This convinced Man-O-War to give Leader-1 another chance, and the Guardian commander devised a plan to lead the Renegades' Thrusters into a trap. After Leader-1, Ace, Bolt and Mach-3 drew the Renegade fleet in, Man-O-War led a fleet of Command Centers into battle and the majority of the Thrusters were destroyed before the Renegades were able to retreat. At the next Council session Man-O-War apologised, admitting that Leader-1 was the GoBot to lead the Guardians to victory.Mission: GoBotron

Man-O-War joined Leader-1 and Dive-Dive in reviewing UNECOM's work at the undersea Charybdis Labs. When Cy-Kill and the Renegades struck, an outpouring of Scylla Waves caused local marine life to gain the ability to communicate with the humans and GoBots present. Cy-Kill turned the situation to his advantage by tricking Leviathan, the blue whale spokes-being for the sea creatures, into seeing the Guardians as his enemies. Fortunately, a modification to the Scylla Wave generator revealed Cy-Kill's treachery, and peace returned to the seas. Scylla and Charybdis Cy-Kill once arranged a fight between Courageous and Monsterous, with the intent of unleashing his recently reactivated second combiner Puzzler on the brawl as an ambush. The Guardians learned of his plan, however, and worked to prevent the Puzzlers from reuniting, splitting into several teams to do so. Man-O-War's unit failed to stop Pocket and Crossword from arriving, but fortunately Good Knight and Defendor held up Rube, leaving Puzzler unable to fully form. Six Heads are Better than One

As Sideways and Gong played with mixing universal streams, the Decepticons staged an all-out assault on Guardian City on Earth. Man-O-War was annihilated by the combined firepower of Thundercracker and Skywarp. Echoes and Fragments 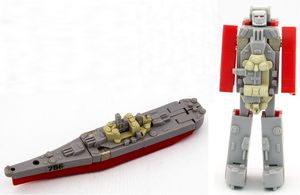 Man-O-War was released by Tonka in the third series of GoBots, and converts from robot to Iowa-class battleship in 7 steps. The toy was a repackaging of Battleship Robo from Machine Robo, with no significant changes. Man-O-War has decent shoulder articulation, though like Crasher and Fitor his legs to tend to wear unevenly, sometimes making loose figures knock-kneed. 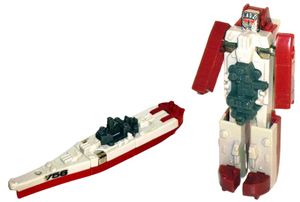 The European version of Man-O-War used a lighter shade of grey for the upper decks, had the superstructure in dark grey, darker shade of red for the underside of the hull and also switched the stern/feet to the same dark red instead of grey. As with many late-run figures, the Robo Machine version is much easier to find that the GoBots version.

The Australian release of Man-O-War was the same as the European version, and released as part of the eighth series of figures.