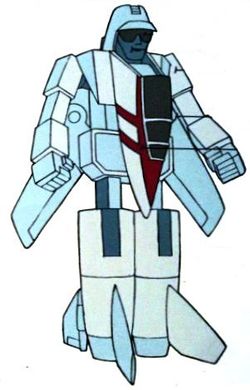 Sky-Jack is a Renegade. He's a punk, like most Renegade jets.

He is sometimes known as Spike.

Spike was based on Roguestar during Cy-Kill and the Master Renegade's attack on GoBotron. He informed Cy-Kill that the Disassembler had been readied for the captive Guardian Leader-1.The Fall of GoBotron

Along with Cy-Kill, Cop-Tur and Crasher, Sky-Jack attacked the Earth colony ship Pilgrim, but was driven off by the arrival of the Guardians Leader-1 and the Secret Riders Twister, Tri-Trak and Throttle. Quest for New Earth. He was later part of the Renegade team that attempted to attack the new Guardian/UNECOM Star Fortress. They were driven back by the space station's quantumite-boosted shields and changed tack, luring a UNECOM ship to Halley's Comet. There he, Cy-Kill, Crasher, Cop-Tur and Pincher soon overwhelmed Turbo, Matt Hunter and Professor Von Joy, but A.J. Foster and Nick Burns escaped. Sky-Jack and Pincher were sent to deal with the pair, but the resourceful humans dropped a load of rocks on them. They were then able to sneak onboard the Star Fortress in the UNECOM shuttle and began trashing the place. While Leader-1 was able to shoot Sky Jack down and the Renegades were ultimately unable to steal the quantumite, the Star Fortress was ultimately destroyed.The Secret of Halley's Comet Later Sky Jack would work with Gunnyr in attacking a Guardian ore convoys on the way to GoBotron, damaging Mach-3 and leading to the convoy's materials being destroyed. A second attack over GoBotron itself also started out well as Leader-1 and Ace were drawn away by the pair and huge metal panels were sent falling down on GoBotolis, though the Guardians were ultimately able to salvage the situation.Mission: GoBotron

Sky-Jack was transported to Earth as part of the Renegade army assembled at Mauna Mauna but they were defeated by the Guardians after a long battle. The Battle at the End of the Earth

Along with Pincher and Ace (sic), Sky-Jack chased after the Friendly Machine Man Hans-Cuff on Earth, causing him to crash with their fire. The trio of Enemy Machine Men then turned their firepower on Turbo. Challenge of the Machine Men 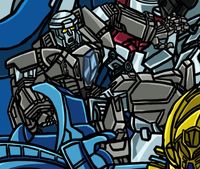 During the Diaspora, Sky-Jack was dispatched to Level 72 along with an assortment of Guardians and Renegades. Cultural Appropriation

Sky-Jack frequently acted as an information gatherer for the Renegades. His hacked Earth broadcast satellites gave Cy-Kill the idea to run for President of the United States in an upcoming election. Cy-Kill For President On a reconnaissance mission, Sky-Jack picked up a transmission between UNECOM and the Guardians about an intelligence-boosting device. Cy-Kill managed to acquire it, but the mental boost to Cop-Tur did not have the effect he hoped it would. Cop-Tur the Genius In an alternate reality where Leader-1 never rose to lead the Guardians, Sky-Jack was one of the Renegades left to defend the Time Portal which allowed Cy-Kill to create this timeline. Renegade Victory Part 2 On one occasion, Cy-Kill and Doctor Go super-charged their Astro-Beam to transport the entire Communication Moon of GoBotron away in order to plunder its secrets. Sky-Jack was one of the Renegades brought to the moon by Cy-Kill, but they were unaware that Leader-1 was also present. As Leader-1 picked off the Renegades one at a time, Sky-Jack confronted the Guardian and they got into a dogfight in the moon's holographic core. F-14 Tomcat fought F-15 Eagle, but Leader-1 ultimately brought Sky-Jack down. The Stolen Moon After stealing some of the new element Scootonium, Cy-Kill had a Quantum Tunneling Shield fashioned that made him virtually invincible to attack. When the Renegades received word High Councilor Zeemon would be touring the GoBotron Fortress, Cy-Kill dispatched Sky-Jack to scout ahead and determine if this tempting target was really a trap. Guess what? The Scootonium Scenario While assessing the possible threat posed by new Guardian Academy graduates, Cy-Kill mused that Sky-Jack would be an effective opponent for the Guardian intelligence officer, Sky Fly. Opportunity Knocks Part 2

For their own amusement, Sideways and Gong played with reality so that elements of a Gargent stream blended in and out of a Primax stream. In this amalgamated universe, Sky-Jack was a Renegade who attacked a Command Center on its way to Autobot City on Earth. Echoes and Fragments 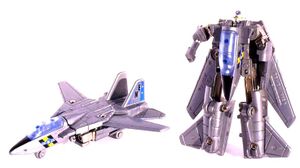 Sky-Jack was released by Tonka in the third series of GoBots, and converts from robot to Grumman F-14 Tomcat with moving swing-wings and a retractable nose wheel in 7 steps. The toy was a repackaging of Tomcat Robo from Machine Robo, with a modified sticker sheet, removing the USNAF roundels from the wings and adding a different squadron flash. The robot mode has good articulation in the shoulders and unlike many small GoBots uses metal-on-metal joints, which means he rarely suffers from loose parts.

The European version of Sky-Jack used a darker grey plastic but was otherwise identical to the North American release.

The Australian version of Sky-Jack was the same as the European version, and was issued in the eighth series of figures.