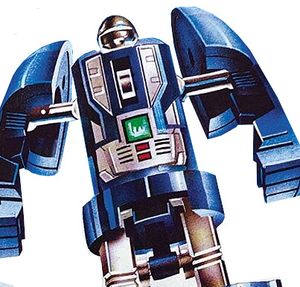 Dive-Dive is a really nice guy, eager to help and dedicated to the Guardians' mission. Unfortunately, for some reason the Modifier assigned him a submarine mode when the planet GoBotron has virtually no standing water. As a result, Dive-Dive lives for the times when his duty rotation brings him to Earth and he can lend his genuinely impressive nautical skills to the cause in a much more accommodating environment.

The long-serving Dive-Dive was very enthusiastic when called upon for deployment on Earth, as the planet gave him much more of an opportunity to use his alternate mode. He was tasked with recovering a downed UNECOM satellite, operating from one of the organisation's ships with Nick Burns onboard his submarine form. They were unaware that the Renegades were watching them but before Cy-Kill could attack a huge water spout knocked Thruster away and battered the UNECOM ship. Thankfully Dive-Dive had recovered the satellite and resurfaced enough to push the ship to safety. The spout was later found out to be caused by Professor Robert Frost's Climatizer, which the Guardians tracked to Antarctica, finding that it was under Renegade control. Cy-Kill used the machine to incapacitate Leader-1 and Turbo, leaving Dive-Dive and Scooter as the only Guardians left to stop Cy-Kill. Their hopes took a further hit when the Command Center was damaged by the ionised force-field surrounding the Climatizer. With this setback General Newcastle considered giving in to Cy-Kill's demands but Dive-Dive convinced him to continue the fight. He and Nick were able to pick up Frost and his nephew Sidney, but were spotted by Cop-Tur and Screw Head. The pair of Renegades were dismissive of Dive-Dive's combat ability but soon learnt the perils of underestimating the Guardian, who shot Cop-Tur down with a subsurface-to-air missile. Then, with information from Frost, he was able to find the Climatizer's underwater antennae and destroy it - wrecking the Climatizer and, as a happy side-effect, freezing Cy-Kill in a block of ice. After the Renegades retreated and the Command Center was repaired Dive-Dive and Nick opted to take a scenic underwater route back to base. Cold Spell 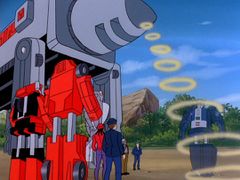 When the Renegades built the underwater Starfish base off Maru Maru Island and began capturing passing human cargo ships Leader-1 had Dive-Dive called up via Astrobeam from GoBotron, assigning him to patrol the nearby sea lanes. However, he and Flip Top were unable to prevent the capture of the SS Vega. However the Guardians were able to trick the Renegades into stealing a decoy ship, allowing Matt Hunter to shut down the Starfish's Stealth Device, which meant the base was then visible to Dive-Dive's scanners, allowing him to provide covering fire before rescuing Turbo and Scooter. The Starfish was forced to surface and the Renegades abandoned the base when a taskforce of UNECOM warships surrounded it. Depth Charge After the Guardians captured Fitor on Earth, he was brought to GoBotron to undergo brainstorming. Dive-Dive was one of the Guardian security officers called out to maintain watch on the prisoner. Fitor to the Finish 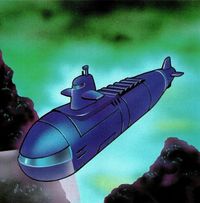 Dive-Dive was assigned to Earth when Cy-Kill, Cop-Tur, Crasher and Professor Braxis took control of the cargo ship Global Trader, abandoning the unconscious crew to their deaths. Fortunately, Dive-Dive was in the area searching for a sunken galleon near Peru, to find gold to purchase concrete to bury the Enemy Invaders. His sonar sensors picked up the Renegades' signals and he was able to save them before they drowned. He relayed the news of the capture of the Global Trader to the Command Center, and the Guardians were able to retrieve the ship. Dive-Dive placed Captain Clegg and the rest of the crew back onboard the ship before they woke up. Captain Clegg's Dream Later Cy-Kill gathered the full strength of the Renegade army at the island of Mauna Mauna. While the Battle Suit fought Zod, Nick and A.J. sent out a call for assistance. Dive-Dive was the first to respond, arriving off the island and firing a power beam into a stone idol, crushing Psycho and Bad Boy, eliciting a delighted response from Matt. The Guardians were ultimately victorious. The Battle at the End of the Earth

Dive-Dive was one of the Friendly Robo Machines sent to Earth. Leader-1 noted he was unbeatable in the sea, with Dive-Dive replying that he was similarly adept under the sea as well.Challenge of the GoBots - A Robo Machine Product 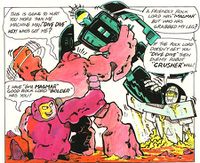 When the Rock Lords joined the raging battle between the Friendly and Enemy Machine Men, Magmar grabbed Dive-Dive and prepared to crush him, only to be restrained by Boulder. Challenge of the Machine Men

During the Diaspora, Dive-Dive was dispatched to Level 72 along with an assortment of Guardians and Renegades. Cultural Appropriation

Dive-Dive, Dozer, and Mach-3 operated Command Center 14 when they encountered Cy-Kill. Their ship was destroyed, but with the help of Command Center 6's crew, they managed to capture Cy-Kill and escort him to the Prison Moon of Gobotron. The Long Game Dive-Dive joined Leader-1 and Man-O-War in touring Charybdis Labs, an underwater research facility. The Renegades conducted a raid on the lab, and Dive-Dive engaged Scorp in undersea combat. When Cy-Kill blew the base's power storage, however, Scylla-Waves radiated from the facility and into the nearby sea life. A pod of dolphins and whales surrounded the GoBots, communicating with them telepathically thanks to the Scylla-Waves, and ordering the "surface-dwellers" from the oceans. Cy-Kill manipulated the lead whale, Leviathan, into joining him in an alliance, the Guardians were forced to flee with their human allies safely aboard Dive-Dive.

As the sea creatures joined the Renegades in assaulting the surface world, Scooter and Anya Turgenova came up with a way to alter the Scylla-Waves to prevent Cy-Kill from lying further to the marine life. Dive-Dive escorted them back to Charybdis Labs to get the necessary equipment, beneath a hologram of Scooter's disguising him as a whale. Scooter and Anya's work with the Scylla-Waves was successful, and Cy-Kill accidentally foiled his own plans by telling Leviathan exactly what he intended to do with the Earth. Scylla and Charybdis When the Guardian convoy came under attack by space pirates allied with Cy-Kill, Dive-Dive joined Leader-1's command team to confront the pirates. Using Scooter's holograms, the Guardians hid in the next convoy when it was seized by the pirates. At the pirate fortress, Dive-Dive and Leader-1 met with Greenbeard, but Cy-Kill and Crasher framed Leader-1 for trying to attack the pirate king with a knife, breaking the rules of parlay. Dive-Dive and Leader-1 were sentenced to death, by Dive-Dive stalled by asking Greenbeard to describe the most beautiful ocean he'd ever seen. This gave Scooter and Turbo time to uncover proof of Cy-Kill's treachery, and the Renegade-pirate alliance was broken. Space Pirates of the Helix Nebula

As Sideways and Gong played with mixing universal streams, the Decepticons staged an all-out assault on Guardian City on Earth. Dive-Dive was seriously injured and perhaps killed in combat with the Seeker, Dirge. Echoes and Fragments

Dive-Dive was one of the Go-Bots that joined Leader-1's army to face the Renegade uprising. Issue 2 Centuries later, when Road Ranger decided to separate Gobotron from Earth the massive Dive-Dive was one of the few Go-Bots to stay behind on the planet, appointing himself protector of the planet's oceans. He announced his presence to the two astronauts who remained behind to re-educate Earth's primitive population, warning them to tread carefully in his domain as they sailed from the Valley of Rock Lords.Issue 5 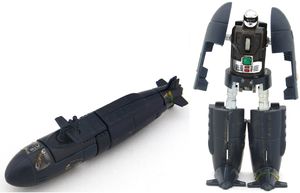 Dive-Dive was released by Tonka in the second series of GoBots, and converts from robot to Los Angeles-class nuclear submarine in 6 steps. The toy was a repackaging of Submarine Robo from Machine Robo, with no significant changes but omitting the extra sticker sheet of the Japanese release. Subtle metal wheels on the bottom of the submarine mode enable it to roll along on level surfaces. Considering the shape of the alternate mode Dive-Dive has surprisingly good proportions in robot mode and retains good articulation in the shoulders. A weak point is the ankles, which can war - while this is not a problem in robot mode, where gravity keeps them in position, it means the two halves of the submarine's stern can flop around as they do not peg together, relying on the friction of the joints to stay in position.

An unchanged Dive Dive was included in one of Tonka's Guardian Gift Pack sets, with similarly unchanged versions of Hans-Cuff and Royal-T. 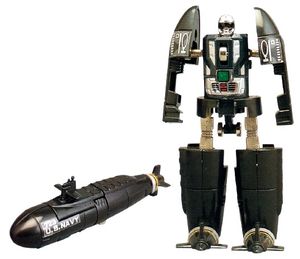 The European release of Dive-Dive featured no changes from the Japanese release—retaining the extra sticker sheet featuring "723" pennant number sticker that identifies the alternate mode specifically as the USS Oklahoma City.

The third toy from the fourth wave of figures, Submarine Man was released by Bandai Australia in 1983. He remained identical to the original Submarine Robo toy, albeit packaged on a blue backing card.