It's a race against time to interrogate Fitor before the Astro Beam saves him. 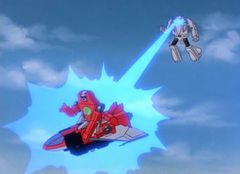 Anya shows Leader-1, Turbo, Scooter, Matt, A.J. Foster and Nick around a new state of-the-art UNECOM Surveillance Station. Matt is impressed, though Turbo and Scooter make snide remarks about how far it is behind GoBotron's technology. On Roguestar, Cy-Kill is aware of its' development and dispatches Fitor and an assault team made up of Bad Boy, Stallion and Stinger to destroy it, sending them to the location via Astrobeam. Their presence alerts the Guardians but their early attack causes considerable damage before Leader-1 and Turbo head into battle. Turbo flattens Stinger and Stallion while Leader-1 shoots down Bad Boy. The pair then go after Fitor, with Leader-1 realising how much could be learned from the Renegade second-in-command if he was captured. Turbo jumps on the Renegade's jet mode and causes him to lose control, while the humans join the fight with laser rifles, preventing the other three from intervening. Watching with Crasher and Cop-Tur, Cy-Kill decides the mission has achieved its' purpose and prepares to Astrobeam his troops back to Roguestar, but Leader-1's forcefield prevents Fitor from going with them. Scooter and the humans begin repairs at the base while Leader-1 and Turbo take their captive to UNECOM Headquarters for interrogation. However, they have less than 48 hours until the Astrobeam returns Fitor to Roguestar, and he is not proving cooperative. In fact, despite being in a restraining bolt he smashes into the main computer on the Command Center 3, sending the ship out of control. 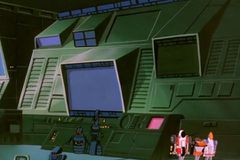 However, the Guardians are able to grab their prisoner and escape the doomed Command Center. Back on Roguestar, Cy-Kill is furious at the capture of Fitor. Crasher advocates killing Fitor to prevent him giving anything away under Brainstorming but Cy-Kill considers this a last resort, instead sending her and Cop-Tur to mount a rescue. For his part Fitor is still refusing to talk, with Leader-1 preventing Turbo from getting information out of him with physical violence, instead planning to take him to GoBotron, where they have their most powerful Brainstormer. En route they are attacked by Crasher and Cop-Tur, but the brief to take Fitor alive holds them back and the Command Center returns fire, hitting Thruster' power core and forcing the pair to bail out before it explodes. As a result the Command Center is able to go into hyperspeed, as Cy-Kill has a better idea than using Roguestar's firepower. At the surveillance base repairs are almost complete when Cy-Kill, Cop-Tur and Crasher appear outside. They are unable to contact Leader-1 as the radio is still not fixed, and Scooter's attempts to bluff with a hologram of their commander do not fool Cy-Kill. Despite Matt's efforts the group are captured by the Renegades, who plans to barter them to free Fitor - and destroy Leader-1. 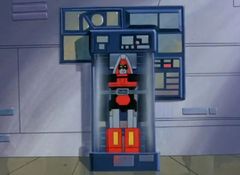 The Command Center arrives at GoBotron, touching down at Landing Bay 19, where Zeemon meets them with Staks, Dive-Dive, Wrong Way, Night Ranger, Blaster and Heat Seeker. Fitor is led to the Brainstorming Chamber while Zeemon congratulates Leader-1. However, Cy-Kill has Scooter and the humans are imprisoned onboard Roguestar, and he interrupts the Brainstorming process to tell Leader-1 of his hostages - with Scooter begging for help. He demands Fitor to be released in exchange on Sector 17, an unfinished area of GoBotron, in person and alone. Despite realising it is likely a trap, Leader-1 has no choice but to take Fitor to the agreed location. As expected Cy-Kill double-crosses him, having Crasher and Cop-Tur Astrobeam in as well. Leader-1 blasts Cop-Tur but Cy-Kill is able to release Fitor from the restraining bolt and his dogfights with the Guardian commander - only for the Astrobeam to reverse just as he is closing for the kill. Turbo then arrives with Wrong Way, Hans-Cuff, Blaster and Heat Seeker; with the odds now against them Cy-Kill orders the remaining Renegades to Astrobeam back to Roguestar. Leader-1 feels they were close to breaking Fitor - who is already listening to Cy-Kill's latest plans back on Roguestar. 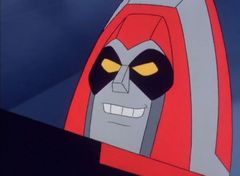 "On this planet they punish bad boys, Bad Boy!"

—Turbo finds out just how psychotically loyal Fitor is as he tries to kill everyone on the Command Center - himself included. 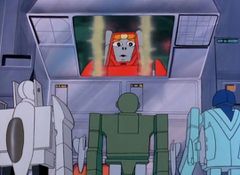 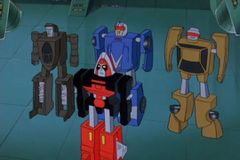