The Atlanteans took many secrets to their graves...so let's dig them up! 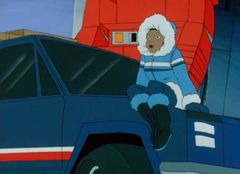 Doctor Janus believes he has located the lost continent of Atlantis under the arctic, so a joint UNECOM/Guardian fact-finding expedition is mounted, consisting of Janus, his colleague Lois Ransom, Tork (loaded with equipment), Scooter and Matt Hunter, while Leader-1, Turbo Nick Burns and A.J. Foster wait in the Command Center as backup. Finding proof will result in a full-scale UNECOM-funded exploration, but Janus is impatient and progress is slow from the treacherous terrain and things get worse when Cy-Kill and Crasher appear, causing an avalanche. However, Tork is able to trap them under a rockfall; despite the situation being under control Janus sends a distress call to the Command Center, but when a cross Matt snatches the radio off him he finds static interference has cut them off. Soon after they find the secret door that allows Janus to enter Atlantis, though he's very evasive about how he found it himself. Once they're all inside Lois reads up on the books that led Janus to Atlantis, noting a page on the Amulet of Power, which is said to control the Crypt of Dreams. Janus dismisses it as superstition, snatching the book back. As Matt remarks on Janus' bad mood the Doctor slips outside and speaks to Cy-Kill, berating the Renegade for causing the avalanche and urging him to complete his part of the deal. Cy-Kill tells him he wants to wait until all the Guardians are in his trap; unseen by him Janus already has the Amulet. Back inside he leads the UNECOM party to the lost continent of Atlantis itself, which he theorises was submerged when a cataclysmic event altered the Earth's axis. He, Tork and Scooter set up a base camp while Matt and Lois explore - before suddenly being grabbed by Cy-Kill, who reveals that Janus is working with the Renegades; Crasher and Cop-Tur then appear and take out the Guardians. 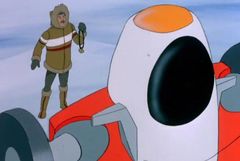 Leader-1 and Turbo then arrive to investigate; Crasher and Cop-Tur are sent to intercept but are shot down when Nick and A.J. arrive in a Boomer. The Renegades retreat into Atlantis and Leader-1 plans to follow after Tork is repaired. However, Janus has slipped away from both groups and found the Crypt of Dreams, which he opens with the Amulet of Power. He is then able to summon the ancient powers of the dark dimensions, with a huge Minotaur appearing before him and doing his bidding. Cy-Kill appears and tries to take the amulet for himself but finds the Minotaur is impervious to his weaponry and backs down. Janus explains the Atlanteans had worked out how to bring in creatures from other dimensions; faced with such power Cy-Kill is forced to make a new deal with the scientist - on Janus' terms. Unsure of their next move, the Guardians are set to head back to the Command Center to work out a new strategy when the group comes under attack from the legendary Furies. The humans take cover in the Boomer while Scooter hides; the Guardians find their weapons useless; Turbo drags an injured Leader-1 towards a cave with the Boomer as Janus, flying in Cop-Tur, commands the Furies to destroy them. Scooter and Tork look on, believing their friends to be finished. 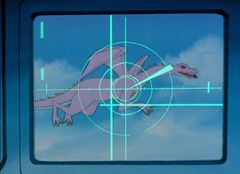 Matt is able to make radio contact but the group have no means of escaping, though Scooter soon devises a plan - to get the Amulet from Janus, who has just brought a dragon into being. Tork makes a dummy attack and Janus panics, getting caught by Scooter. Crasher sets off on a wild goose chase around Atlantis, not realising Tork has hidden from her, while Cy-Kill and the dragon chase off after Scooter. The monster bathes the Guardian in fire, allowing Cy-Kill to take control of the Amulet. However, Scooter is able to trick the dragon into melting the ice burying the others. A.J. is then able to use the ice blocking the Boomer's cannon, firing it into the dragon's mouth and quenching its' fire. Tork meanwhile catches Janus, who apologises for his actions and offers to help them defeat Cy-Kill. The Renegade has summoned a Griffon, a Minotaur and a Cyclops but struggles to command them, having used the wrong incantation, and the arrival of the Gorgon makes things even more chaotic. She turns the Cyclops and Cop-Tur's blades into stone before destroying the Amulet. Cy-Kill orders a retreat, while Turbo tricks the Gorgon into turning the Minotaur and the Griffon into stone. Scooter then uses a hologram to trick the Gorgon into firing its' eyebeams into a mirror, turning itself into stone. Matt says UNECOM will send a team to fully explore the city, to be led by a reformed Janus. Meanwhile on Thruster, Crasher berates Cy-Kill for another over-ambitious failure. 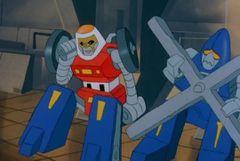 "You guys had better head for the Boomer."
"What about you, Scooter?"
"Oh, don't worry about me. I'll be fine. I'm gonna hide."

—Scooter and Nick discuss the finer points of heroism.

"We could have conquered Earth, Cy-Kill, but noooo, you were too greedy, you wanted all the creatures..."
"Oh, shut up! Some day... Some day!"

—Crasher and Cy-Kill squabble over the problems with being a villain in an eighties cartoon show while a heartbroken Cop-Tur cradles his petrified rotors. 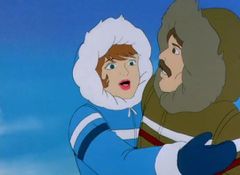 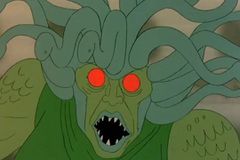 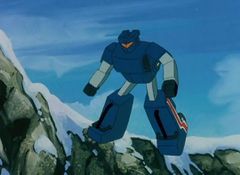