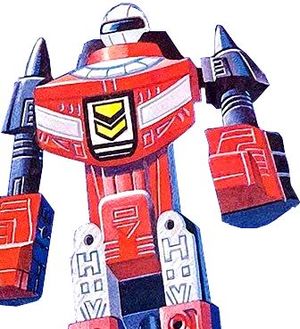 Snoop is the latest and greatest in GoBots, quick to brag and just as fast to worry about any damage to her shiny new systems. Her fast reflexes and ability to convert into a high-speed stealth jet seem to translate into a flighty, nervous nature, proving how reliable old standards can be over the newest innovations. Her soft-spoken manner occasionally gives way to her nerves...

...but this is all a lie: Snoop is a Renegade spy making excuses to help with her deep cover as a Guardian. When her cover is blown, her voice drops an octave and her nervous character changes to old-fashioned Renegade aggression, quick to blast anyone who gets in her way. Equipped with advanced surveillance technology including spy cameras that can extend from her aircraft mode, she's an expert in secretly capturing enemies on film. All this, and she's a halfway decent singer.

She is sometimes known as Sky-Spy.

Piloted by Nick Burns in a race against Leader-1 and Matt, Snoop lost in spite of Scooter's observation that her jet mode was "really something", and blamed her failure on Nick's lack of experience. She followed this up with a declaration that she herself lacked nothing, boasting of her technological superiority before an exhausted Leader-1. Turbo warned her against being a sore loser, just as Small Foot arrived to summon the whole group to meet with General Newcastle at UNECOM Headquarters. Snoop disputed the General's suspicions that a newly-discovered planet in the Vega star system was a Renegade base, and tried to excuse herself from joining the mission to investigate the planet, finally bowing to encouragement from Turbo and Leader-1. 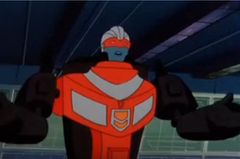 When the Guardian Command Center crashed on the planet in question, Snoop threatened to make Turbo pay her repair bills for damaged circuits, but soon slipped away to contact her true leader, Cy-Kill. When Scooter discovered her deception, she knocked him out with her hand-blasters. She excused her absence to the other Guardians, and followed Leader-1's orders to split up and explore the planet. This made the perfect cover for her to return to her home base, where she waited while the Guardians and their human companions were rounded up, reporting on progress to Cy-Kill. She tried to halt an attempted escape by threatening the captives with a rifle, but was quickly taken out by Turbo's evasive driving and a blast to the back. Taking Leader-1 up on a rematch, she gladly unleashed her true firepower and flying prowess on the "old-timer"—before her opponent's greater experience led her into a crash that destroyed most of the Renegade mining operation. She and the other Renegades barely escaped the resulting explosion of the planet, watching the devastation aboard a Thruster. Cy-Kill's Cataclysmic Trap 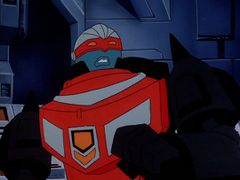 "If you managed to kill them, I assure you, they were not like me."

She joined the other Renegades in observing as Cy-Kill brainwashed Scooter, and was at her leader's side when he ordered Crasher and Pincher to hunt Matt, as well as for the following attack on a UNECOM facility. When the plans went south, she followed orders to retreat as the malfunction of one of Von Joy's creations provided a distraction. It's the Thought that Counts While flying above a race track, she spotted the supposedly dead Turbo in car mode, and reported his survival to Cy-Kill, even providing video evidence. Speed Is of the Essence During an attack on the Guardians, she filmed Leader-1 while Cy-Kill attacked, and made her own dive at the Guardian commander to get a closer view, breaking off without actually firing on him—and bemoaning him as a waste of good looks. Aboard a Thruster, she removed a cartridge containing the recordings from a cavity in her chest, handing it to Cy-Kill.Doppelganger

Fleeing the Cataclysm that threatened to destroy the universe, Snoop was one of a group of GoBots who relocated to the alternate universe designated Level 39, for which she adopted a new appearance to blend in. Cultural Appropriation 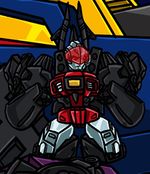 The very image of an operatic heroine.

Scheming to win a mystical gemstone from the collection of an eccentric theater lover, the Renegades put on a performance of the comic opera The Pirates of Penzance, with Snoop cast in the role of Mabel opposite Re-Volt as the protagonist Frederic. In spite of her reputation as a spy, Cy-Kill though she was "passable" at best, and her performance as a love interest made actual sparks fly, only a small part of the destructive performance given by the Renegades. The Show Must Go On A competition against the Guardians on the planet Amazonia IV saw Snoop chosen for her intellect and cunning, alongside Vamp and Crasher in a bid to win an "object of great power". Facing off against Spay-C and Anya Turgenova in the second of three challenges, Snoop made a show of poor progress in directing a flow of water to a wheel, before revealing that her own actions were designed to divert her Guardian opponents' work to her own benefit. Her treachery won the challenge for the Renegades, setting a tie. Ladies Night Snoop was one of the Renegades temporarily brainwashed by Doctor Braxis's Destabilizer Cannon modification. Once Braxis Twice Shy Part 2 She later intercepted material from the Guardians documenting encounters between the Rock Lords of Quartex, and the RoGuns. Of Rocks and RoGuns Part 1

So far off Broadway, they're from another planet.

The mischievous Sideways and Gong made a bet where they began blending universal constants between universes containing the GoBots and the Transformers. As a result, Snoop was spying on Moonbase One for Cy-Kill when Optimus Prime decided to order a special run to Autobot City on Earth. Later on, after the imps had further blended the universes, Snoop was a member of the Decepticons after Zero tossed Megatron out of Astrotrain and claimed leadership for himself. His declaration was contested, and a fight broke out wherein Snoop tackled Dr. Go. Echoes and Fragments

Snoop was one of the Renegade Go-Bots that flocked to Cy-Kill in the desert near Route 66, helping surround and subdue the US government Go-Bot Leader-1 and retrieve military secrets from his brain. Issue 1

Intended to be released in the United States as an import of the Machine Robo Blackbird Robo toy, Snoop's figure was cancelled for unknown reasons. She converts from a robot to a Lockheed SR-71 Blackbird stealth aircraft. The hip and knee joints of the figure can become loose, though the toy's weight generally holds them in place well enough. Contrary to popular belief, Snoop was likely not identical to Blackbird Robo/Sky-Spy - the one verified GoBots example features different stickers, though there is a chance this was a pre-production example.

Snoop was also advertised in the 1985 Tonka Catalog as released being released in a gift pack with Cy-Kill and Stinger. However, when the set was released it came with Twin Spin instead. Boo! 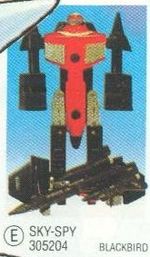 Initially released by Bandai Europe as Sky-Spy, the figure remained identical to the original Blackbird Robo figure. While catalogues were later updated to feature the character's GoBots name the backing card was not. 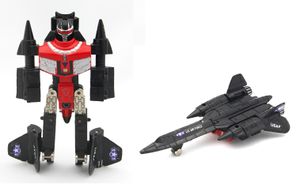 The second new figure sold after the shift to Tonka-based titles, Snoop retained both her GoBots name and faction - the only official release of the figure to do so to date. She was repackaged and released by Bandai Australia on a black backing card depicting a blue-tinted alien landscape. 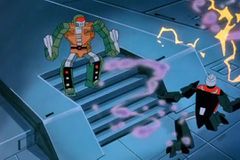