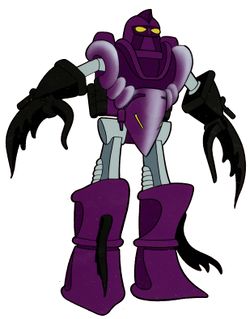 Guardians beware, you're in for a scare! The Monster GoBot, Creepy, lives for the thrill of the hunt and the satisfaction of the kill. A mutant monster hailing from the scorched remains of a world in the Antares System, this techno-organic terror is prepared to use his deadly claws to rip other GoBots apart should they come too close. For any who keep their distance, Creepy can fire a lethal poison from his spider-like legs. Even the Renegades are wary of Creepy, lest he choose to mark any of them as his new prey. Nonetheless, Cy-Kill would gladly welcome him into his ranks, provided he could pry Creepy away from his loyal service to the Master Renegade.

Along with Scorp and Vamp, Creepy attacked the Blue Team of Guardian cadets on one of Saturn's moons, webbing up both Tri-Trak and Tork before they were driven off by the Red Team. Unknown to the Guardians however the whole thing was part of a dastardly Renegade plot to kidnap Zeemon - the attack had been orchestrated to keep Blue Team busy while the Red Team spies Re-Volt, Chaos and Traitor met up with Cy-Kill. The plan was ultimately thwarted after Tri-Trak, Nick and A.J. investigated the strange goings-on at the academy and raised the alarm.Guardian Academy 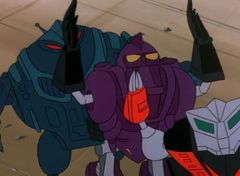 Like Scorp and Vamp, Creepy was created by the Master Renegade to protect his hideout on Antares III. Unlike the other two he kept a low profile until contacting them to spring their master from Cy-Kill's custody. They were able to get the Master Renegade out of Roguestar with few problems, and proceeded to the human colony of New Earth as a new base. Arriving ahead of the Command Center transporting the colonists and the Last Engineer, the group were able to surprise the Secret Riders, with Creepy trapping the colonists' Guardian escort in an energy net fired from his claws. However the arrival of Cy-Kill, Crasher and Cop-Tur complicated matters, with Vamp and Scorp abandoning the Master Renegade, who was beaten by the Last Engineer. Creepy remained loyal to his creator though, gathering him up with his ship's tractor beam and escaping from New Earth.Quest for New Earth

Creeper's two appearances contain an insoluble continuity error - "Guardian Academy" is explicitly the debut of the Secret Riders otherwise the plot doesn't work but features Creepy as a rank and file Renegade, while "Quest for New Earth" is implicitly the debut of Creepy but features the Secret Riders on their first mission after graduation. Most likely the appearance in "Guardian Academy" was originally written for the absent Pincher but Creepy was put in his place to sell his new toy

Creepy was part of a Renegade squad sent by Cy-Kill to grab the Guardian Path Finder, so she could be processed by Doctor Braxis' brainwashing ray. However Scooter had unravelled the Renegade scheme, tricking them into attacking a huge magnet disguised as the Command Center. He was then stuck when the magnet was activated and hurled off into space. Scooter's Mighty Magnet

When a Cataclysm threatened Gargent 984.08 Alpha, most of the Monster GoBots fled their native reality as part of the great GoBot Diaspora. They wound up on the dystopian Cybertron of Primax 215.19 Epsilon: a world where the Great War between the Autobots and Decepticons had evolved into a series of ritualized Games fought between their successors, the Maximals and Predacons. The GoBots adopted new Predacon bodies, and gained infamy as a street gang known as the "Antares Eight". Ask Vector Prime, 2015/05/14

As they settled in, the Renegades built up a secret base underneath Proximax called the Erebos, equipped with a Modifier and databanks charting the whereabouts of other GoBots in the multiverse. At some point, they welcomed in a second group of GoBotic refugees: the Monsterous combiner team, and their handler Odd Ball. Unhappy with the stagnant Cybertronian social order, the Renegades began their own plan to overthrow the dominant "Builders" and rule in their place. Cultural Appropriation

Creepy was later chosen as one of the twelve randomly-drafted Predacons who participated in the 1924th iteration of the Games. Fortunately, this was interrupted by Lio Convoy's assassination of Supersonic and call for an uprising against the Builders. Broken Windshields

Creepy and the Eight gathered information about the Human Confederacy and learned of an ancient Terran artifact the Rosetta Stone (renamed "The Stone of Sky Warp") held in the Museum of Decepticon Heritage. They arranged to appropriate the stone, and use it to lure the Terrans to Cybertron. Faking as if they were a Resistance team, the Antares Eight seized control of a trans-hyperwave caster in Proximax. Holding the Builder in charge hostage, they beamed demands for all Builders to leave Proximax in the name of the Resistance. In fact, the transmission was a trap to entice the humans, who monitored all Cybertronian transmissions, with a clear view of the Rosetta Stone in the background. The GoBots intended to use quantumite (a Gargent Cluster substance unknown to the Transformers) to weaponize the caster, snare the unsuspecting humans when they arrived, and take their greater technology.

Creepy and the Monster Gobots faced unexpected resistance, however, from a multi-factional group called the Ex-Bots. They interfered with the seizing of the tower, and were only stopped when Creepy got the drop on one of their members, Stiletto. When the Ex-Bots were all killed or driven off, Creepy went to work modifying the tower with his quantumite. The Ex-Bots rallied and returned for a second strike on the tower, but Creepy caught most of them unprepared in an quantumite-fueled tachyon wave. Stiletto had avoided the trap, however, and got the drop on Creepy. The Renegade promised to be a good prisoner, and lend his exotic technical knowledge to whichever side Stiletto belonged to. Realizing how enticing Creepy would be to various sides, and how treacherous he would ultimately be, Stiletto decapitated the GoBot instead. Cultural Appropriation 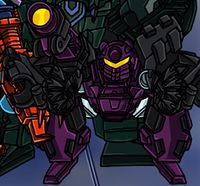 Creepy crawled forth from Antares III, one of the Master Renegade's last creations. He stayed loyal to his creator and served as a bodyguard and agent provocateur with buddy Bladez rather than join Cy-Kill's Renegades; Cy-Kill planned to win the two over, believing the old Master was not worthy of them. Renegade Rhetoric (1), 2015/10/15 Creepy joined the Master Renegade on Gobotron when Bladez infiltrated the Guardian Council. When the Robo Rebels uncovered their plans, Creepy was dispatched to eliminate the Guardian cadets. They managed to drop him down a shaft, but not fast enough to reach the Guardian fleet before Bladez dispatched them on a fool's errand. Fugitives As he recovered, Creepy fought his way through the four Robo Rebels until Tail Pipe sacrificed himself to delay Creepy so the other Rebels could escape. Double Cross The Monster GoBots were eventually defeated when Leader-1 and Cy-Kill joined forces to overcome the Master Renegade. Creepy and Bladez took their master and fled from GoBotron to fight another day. Graduation Day Creepy and Bladez accompanied the Master Renegade to Rogue Star after he convinced four of Cy-Kill's Renegades to turn on their leader in exchange for Power Suit technology. They were left behind to guard Cy-Kill and Cop-Tur, only to be defeated when Fitor, Crasher, and Chaos returned. Creepy and Bladez escaped with their master. Coup de Grunge The Monster GoBots were off on some other mission when the Master Renegade was defeated and captured on New Earth. Human Resources Later, Creepy was pursued by Cy-Kill and the Renegades, who wished to force him into their cause. Creepy maneuvered his ship, the Dromon, near a Guardian supply depot in the hopes of distracting Cy-Kill. The three-party was soon interrupted by the Overseers, a powerful alien race that used a matter-superposition ray to teleport the GoBots across the galaxy. Enslaved by the Overseers, the GoBots were outfitted with cuffs that disabled their power packs and other weaponry while causing a bizarre shift in their color schemes. Creepy went from purple to a lurid green. He, Cy-Kill, and the Guardian Blaster were put to work in the engine room. Leader-1 and BuggyMan managed to initiate an escape attempt, however, soon bringing the GoBots back together. They overpowered the Overseers and forced them to send the GoBots back home. Chains of Doom

In an unstable Iocus reality created by the machinations of Sideways and Gong, the Monster GoBots replaced the Quintessons during the events of the Unicron War. In this version of history, Creepy was one of several Monster GoBots serving the Master Renegade on Antares III, assisting him in throwing sham trials for any hapless visitors they could get their claws on. After Hot Rod and Kup managed to escape death and cause the Dactyls to spill out of their pit, the Monster GoBots fled the sham courtroom for their own safety. Echoes and Fragments 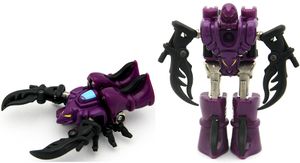 Creepy was released by Tonka in the third series of GoBots, and converts from robot to monstrous scorpion in 8 steps. The toy was a recolour of the Devil Invader Gildis from Machine Robo, with a new purple/black colour scheme. The scorpion mode has a blue painted cockpit, suggesting the alternate mode might (fictionally) be able to accommodate a pilot. Creepy is one of the most dynamic smaller GoBots toys - the figure has shoulder, hip and knee articulation and working claws in both modes. Snip snip! 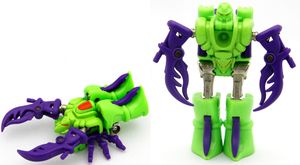 A second version of Creepy, available in green and purple, was released as a mail-order special. It could be acquired by sending off proof of purchase from any four GoBots figures to Tonka, who sent the figures out in brown mailers with a flyer that included a short biography of Creepy - a rarity for a GoBots toy, being the only regular-sized GoBots figure to ever be packaged with one. The "Free Creepy" promotion for the figure even involved a dedicated TV commercial. The offer ran from July 31 to December 31 1985, and the figures could take 10-12 weeks to arrive. Mail in the eighties was grim.

The European version of Creepy was exactly the same as the mass retail American release.