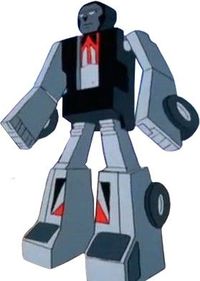 Van Guard is a friendly veteran member of the Guardians. He regularly works with Leader-1's unit on Earth, and is on good terms with the UNECOM team. He is sometimes informally referred to as simply Van by fellow Guardians.

Van Guard was on monitor duty with Scratch at Guardian Headquarters on GoBotron when Roguestar and a massive fleet of Thrusters appeared above Sector 4; he sounded the alarm as a result. He later helped Small Foot stretcher the injured Staks into Rest-Q's make-shift medical bay as the Renegade assault began to take its' toll on the Guardians. The Fall of GoBotron Van Guard was later captured by the Renegades and detained on a damaged Command Center, awaiting disassembly at the Prison Moon. However, Scooter and Sparky were able to trick the Renegade guards into abandoning ship and opened the cells. Along with Turbo, Blaster and Flip Top he stormed the bridge - only to find it was the Guardians who had freed them. Turbo then set course for Earth. Flight to Earth Once there, Van Guard watched Leader-1, Scooter, Turbo and Small Foot demonstrate the Last Engineer's new Power Suits, which would ultimately allow the Guardians to retake GoBotron. Return to GoBotron 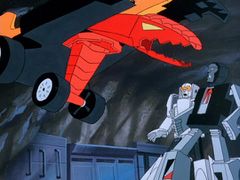 Van Guard later served on Earth with the Command Center crew when Turbo went missing, searching for him at a Renegade broadcast array near his patrol area. He entered the base with Leader-1, though they were pounced on by Scales, left on sentry duty. While the pair were able to take advantage of Scales' lack of arms by dropping the roof on him it wasn't before the Renegades were able to fire up the neutraliser they had been building, though they were eventually able to knock the device out - just in time to help save Turbo, who had been competing in the Barstow Grand Prix after getting mistaken for a normal sportscar. Speed Is of the Essence He was stationed on GoBotron when Cy-Kill tried to take over the planet with robot doubles of the Guardians, and Van Guard managed to get surprised by his double when it simply walked up to him and hit him. Thankfully Small Foot, Scooter, Matt Hunter, A.J. Foster and Nick Burns were able to infiltrate the Moon of Shadows where the real Guardians were being stored and release them.Doppelganger 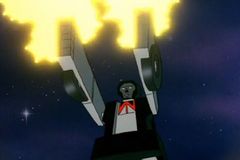 He later joined the Guardians on Earth, helping in the recovery of the psychic boy Sean Roberts by battling Crasher and Block Head in concert with Turbo - though a later encounter with Block Head left him encased in concrete up to his neck, with his team-mates forgetting his plight while a bird nested on his head.The Seer This might have had something to do with Van Guard being one of the prisoners Cy-Kill handed over to the Guardians as a sign of good will while trying to gain their trust for a round of bogus peace talks. Pacific Overtures Along with Heat Seeker, Royal-T and Street Heat he was assigned to guard the captured Cy-Kill on Elba. However, when Royal-T and Street Heat rebelled, Heat Seeker and Van Guard attempted to contact GoBotron for help; however they were hunted down by the freed Cy-Kill and knocked out before being imprisoned themselves. They were later joined by Turbo when he arrived to investigate the distress call; however, he had brought Matt along as well and the trio were released, trouncing Royal-T and Street Heat before ultimately thwarting Cy-Kill's attempts to get past Earth's security in a captured Command Center. Escape from Elba Van Guard was present on Earth when Doctor Aeolis showed the Guardians his new condenser, capable of miniaturising organic matter. He was left on guard but a raid by Cy-Kill, Cop-Tur, Crasher and Bad Boy saw Van Guard overwhelmed and the device taken. Cy-Kill used the miniaturised human population as leverage to be installed as Overlord of GoBotron he declared the Guardians outlaws. Van Guard reluctantly watched his various pronouncements on a large screen with Blaster but when the Renegade destroyed a globe believed to contain a billion humans to make a point their tempers boiled over. Blaster destroyed the screen with a missile but before they could do any more they were arrested by Cy-Kill's enforcers and restrained. Along with Turbo, they were given a show trial in front of a kangaroo court presided over by Cy-Kill, who sentenced them to disassembly. Leader-1 was captured soon afterwards but he then revealed the globes held by Cy-Kill had been switched out for fakes, while Matt released the captive Guardians. With no hostages to hide behind the Renegades were soon chased off GoBotron. Clutch of Doom 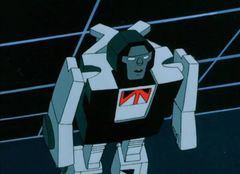 He was again onboard the Command Center while it searched for the source of a distress call. While Scooter and Leader-1 handled that, Van Guard and Turbo kicked back with an oil bath - though their experience was spoilt when the Renegades attacked. Soon after the Command Center's computer systems went haywire and Professor Von Joy was Astrobeamed onboard, setting the device up so Leader-1, Turbo and Van Guard could be miniaturised and sent inside the system to find the problem. After they dodged the systems' cleaning droids, Van Guard soon found debris suggesting there was more to their problems than the supposed electromagnetic infestation. Turbo was then knocked down a chasm by a magnetic vortex, and as Van Guard and Leader-1 hauled him to safety the real source of the computer problems became clear as the Monster GoBots Vamp, Scorp and Pincher appeared. After a chase through the computer's systems the Guardians hit on the idea of leading the Renegades into the cleaning drones, buying them time to get back out before they returned to full size. Inside Job He was again on hand as the Guardians discussed the destruction of the Guardian Space Lab by Crasher, before finding out that Professor Von Joy and Sparky had been able to escape before it was destroyed. Element of Danger} As a high-ranking Guardian she attended graduation ceremonies at the Guardian Academy; at one the Dread Launchers Re-Volt, Chaos and Traitor disguised themselves as cadets, Astrobeaming Cy-Kill, Crasher and Cop-Tur in to help kidnap Zeemon. While the Blue Team of Twister, Tork, Tri-Trak and Staks chased after the Dread Launchers she was one of the Guardians who drove the other three Renegades towards the Thruster simulator. Guardian Academy Later he worked with Tork and Turbo on adding a new panel to GoBotron, though he was discouraged by the huge amount of work still remaining. Battle of the Rock Lords}

During the Diaspora, Van Guard was dispatched to Level 11 along with an assortment of Guardians and Renegades. Cultural Appropriation

On Earth, Van Guard was helping Scooter, Turbo, and Throttle test a new type of force field for UNECOM with Nick Burns and A.J. Foster. The unique nature of the force field protected them, and them alone, from a temporal inversion wave that altered reality all around them. In this new reality, the Renegades controlled Earth and Gobotron, with Matt Hunter and Major Mo as resistance leaders. By conferring with the resistance, Van Guard and his friends realized this was a universe without Leader-1. As stowaways on a Thruster to Gobotron, Van's unit learned of a high-priority prisoner named "Luther Unum", and made the connection. While half the group went to rescue Luther, Van Guard joined Turbo and Throttle in snatching Cop-Tur. They easily manipulated the dim brute into revealing the location of Cy-Kill's Time Portal on Saeculum Gamma, but then Cop-Tur summoned a Zod! Renegade Victory Part 1 While Cop-Tur laughed at the Zod menacing the Guardians, however, he lost track of Van Guard. Van sneaked behind Cop-Tur and grabbed him, forcing him into the confused Zod's mouth long enough for the Guardians to escape. They regrouped with Scooter's team and Luther before heading to Saeculum Gamma in a recovered Command Center. Major Mo was killed fighting through the Renegade blockade around the planet, but eventually the Guardians managed to send Luther Unum back in time so that he successfully grew to become Leader-1, restoring the timeline. Renegade Victory Part 2

Van Guard was one of the Guardians kidnapped by Guerr-O-Vac and forced to compete in the Arena of Strife. Pitted against the Renegade Slicks, he was unable to defeat his adversary. GoBot Arena In testing out Doctor Braxis's new Destabilizer Cannon upgrade, Van Guard, Sky Fly, Bullet, and Heat Seeker joined Leader-1's team as they outnumbered and overpowered the Renegades at a UNECOM base in Rio de Janeiro. Once Braxis Twice Shy Part 1 When Cy-Kill attempted to reassemble his Puzzler combiner, the Guardians fought to keep the Renegades cars separate throughout Philadelphia. However, Van Guard's pickets were unsuccessful in keeping Tic Tac and Jig Saw away from the others. Six Heads are Better than One

Sideways slipped his way past Van Guard and Defendor to access Old Gobotron and the Omega Locks for his reality game with Gong. Echoes and Fragments 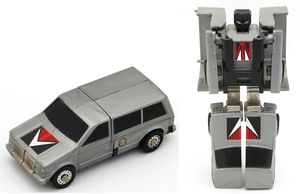 Van Guard was released by Tonka in the second series of GoBots, and converts from robot to Dodge Caravan mini-van in 6 steps. To meet demand in the North American market, Tonka commissioned Bandai to produce several additional moulds specifically for use in the GoBots toyline overseas, including Van Guard. The toy is stamped "MRT-42" (Machine Robo Tonka). The figure has articulation at the shoulders and the knees, though sadly his van kibble can not be arranged in the same distinctive 'X'-shaped backpack as the animation model.

Van Guard was planned to be included in another Gift Pack along with Rest-Q and Leader-1 which was advertised in the 1985 Tonka catalogue but was ultimately not released.