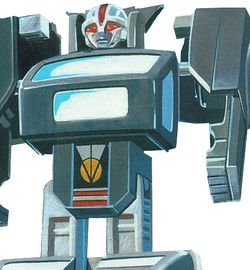 Scratch is a friendly Guardian who recently started his career as a protector of GoBotron.

Scratch was a younger member of the Guardians defense force on GoBotron. He was performing early monitor duty under the supervision of Van Guard when the Renegades and Roguestar initiated an all-out attack on GoBotron, helping raise the alarm. However, the Guardians were eventually overwhelmed by the forcesCy-Kill and the Master Renegade. The Fall of GoBotron After graduating from the Guardian Academy and undergoing full Modification, Scratch accompanied Leader-1 and his team aboard Command Center 1 for his first assignment, on a UNECOM space station with Doctor Mobius. As they arrived the Renegades had targeted the Doctor's Inverta-Ray, with Mobius' old ally Braxis persuading him to go along with the Renegades. When the inverta-ray was briefly turned on the Command Center, making Scratch and his comrades begin to fade out of existence until Mobius noticed his son Danny had stowed away with the Guardians. Scratch then joined the other Guardians in battling the Renegades on the surface of Pluto, where he set his sights high by chasing down Cy-Kill, though the Renegade leader was ultimately able to out-drive Scratch and order a retreat. Together with Mobius and his son, the Guardians were able to stop the Renegades' plans to use the ray on GoBotron itself.Genius and Son 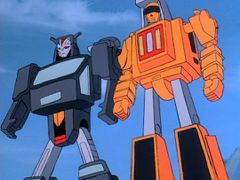 Later on Earth, Scratch was stationed at a UNECOM science facility in Utah. When the Guardians and their sort-of ally Clive were able to return a brainwashed Scooter to his normal self they realised the Renegades were going to make an attempt to steal the Renegade Detection Unit from the base and prepare an attack. When Cy-Kill arrived with Crasher, Pincher, Snoop, Cop-Tur and Geeper-Creeper the Guardians ambushed them, with Leader-1, Turbo and Blaster attacking from one side while Scratch, Dumper, Dozer and Road Ranger fired from the other. The Renegades were about to be destroyed when Professor Von Joy attempted to speed things along with a new weapon and inadvertently immobilised the entire Guardian force, allowing Cy-Kill to lead a retreat.It's the Thought that Counts He was later one of the Guardians taken by Hans-Cuff to search for Leader-1's missing Command Center. Gameworld Along with Night Ranger, Heat Seeker and Rest-Q he was providing security at one of the Guardians' industrial outposts when it came under attack from Crasher and Cop-Tur, though Scratch escaped damage. The GoBot Who Cried Renegade Scratch briefly served on the Guardian Council with Zeemon, Dozer, Path Finder, Staks, Rest-Q and Road Ranger but the group were taken hostage by Leader-1 and Turbo, who were under the control of Buddy's Spectrometer. The group were saved from delivery to the Renegades by the timely intervention of Scooter, Nick and Buddy. Whiz Kid 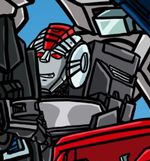 During the Diaspora, Scratch was dispatched to either Level 72 or Level 77 along with an assortment of other Gargent natives. Cultural Appropriation

Scratch, Dozer, and Hans-Cuff discovered the Robo Rebels standing over the recently-blasted body of Zeemon in the Guardian Council chambers. The security officers placed the Rebels under arrest for attempted murder. Rebels Without A Circuit Scratch and Night Ranger was overcome by Cy-Kill's command team as they stole the Space Hawk prototype from UNECOM. The Hawks of Space Part 1 On Earth, Nick Burns and A.J. Foster took Scratch and Turbo to a High Rollahz concert. Scratch and A.J. came up with a plan to share culture between worlds, and talked Ned Dilettante and his band into putting on a concert for the Rock Lords on Quartex. Crackpot arranged for them to use the Ingot Ampitheater as a venue. Magmar and his evil Rock Lords attempted to kidnap the band and force Earth to join them against Boulder, but Scratch, Turbo, and Crackpot managed to recover the hostages, and the band played on. Rock and Roll

As Sideways and Gong played with mingling universal streams, a battle took place at Guardian City on Earth between the Guardians and the Decepticons. Scratch arrived from Moonbase One along with Leader-1 and more reinforcements. He joined Dozer, Bolt, and Staks in the Power Suits to form Courageous and battle the mighty Devastator. Echoes and Fragments

Long after the Go-Bot revolution, Scratch was one of Leader-1's followers onboard the Command Center, and was taken on the quest to find the Lazer Lance. When they found the Go-Bot god Courageous, Scratch donned once of the suits of armour the giant separated into in order to face Cy-Kill's Renegades and Zod. Issue 4 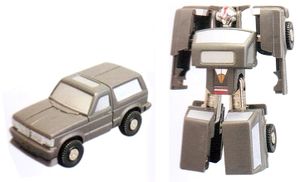 Scratch was released by Tonka in the second series of GoBots, and converts from robot to Ford Bronco 4x4 truck in 7 steps. To meet demand, Tonka commissioned Bandai to produce several additional moulds specifically for use in the GoBots toyline overseas, including Scratch. The toy is stamped "MRT-41" (Machine Robo Tonka) for reference. Like several of the 'MRT' moulds Scratch has a surprising amount of articulation for a toy of the period of such a small size, and is less prone to wear than many of its' peers, while also having an interesting and relatively complex transformation pattern. Which makes it a shame that he turns into a grey box on wheels.