Speed Is of the Essence

Stuck in vehicle mode after a Renegade attack, Turbo is found and used as a race car by a pair of humans. 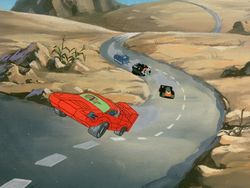 On a solo mission to investigate reports of a new Renegade base, Turbo succeeds in locating the villains' new hideaway when he spots a broadcast array poking out of a butte. A jammer field prevents him from sending in his report, so he sets to dismantling the device, but he is detected by the Renegades and soon finds himself facing off against Crasher, Tank, and Screw Head. The evil trio lure him into triggering an explosive trap they have set up, and the blast hurls Turbo down the site of the butte. He survives, though badly wounded, and is pursued by the Renegades into the nearby town of Barstow, where he takes refuge in a junkyard. The Renegades search through the wrecks for him, but when a pair of a humans enter the junkyard, they elect to leave Turbo to succumb to his injuries and quietly withdraw rather than reveal their presence. 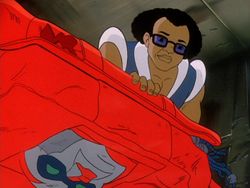 The two boys—Don and Greg—stumble upon the unconscious Turbo, who has hidden himself inside a wrecked truck, and narrowly save him from an encounter with the junkyard's car crusher when they decide to take him home and fix him up to use in the upcoming Barstow Grand Prix. Once Turbo has been safely moved to Greg's garage, the boys puzzle over his alien engine and remove one of its circuit boards. While they are out of the room, Turbo's self-repair systems kick in, healing his external wounds, but he is unable to speak or transform, and so must go with the flow when the boys take him out for a spin and show him off to local bullies Rick and Bill, against whom they will be competing in the race. 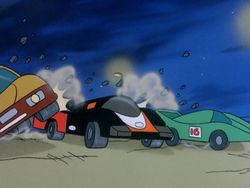 Unable to contact Turbo, the concerned Guardians head for his last known location. They spot both the Renegades' array and Turbo's tyre tracks, so Van Guard goes to investigate the array while Scooter and Small Foot follow the trail into Barstow. The tracks lead them to the town's speedway, where Greg and Don are driving Turbo in the Grand Prix. Unfortunately, the Guardians are not the only ones to recognize their comrade: Snoop, flying by overhead, identifies Turbo and informs Cy-Kill of his continued existence. Summoning Slicks and Spoiler via Astrobeam, Cy-Kill sends them with Crasher to exterminate Turbo once and for all. The race track is already proving dangerous thanks Rick and Bill's cheating—tossing fireworks at Greg and Don, and shredding Turbo's tyres with a spiked ball bearing—but it's nothing compared to the destruction the three Renegades wreak when they smash their way onto the track and batter their way through the other competitors to get to Turbo. Turbo takes control of his body and manages to keep his confused "drivers" safe, dodging the Renegades' various attacks until the Astrobeam wears off and Spoiler and Slicks disappear, leaving Crasher to go mano a mano with her Guardian rival. 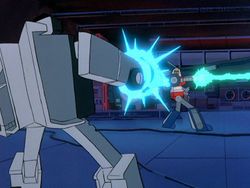 At the Renegades' butte, Cy-Kill and Cop-Tur prepare for a test-firing of the new superweapon they have been building in the secret base: an Electromagnetic Neutralizer, capable of blacking out all electronic systems so that Cy-Kill can hold whole cities to ransom. Alerted to the Renegades' activities in the area by Scooter, Leader-1 arrives to link up with Van Guard outside the butte, and together, the pair storm the Renegade base to stop the villains' plan. Cy-Kill sics Scales on the two Guardians, and although they are able to get around the beast by collapsing part of the ceiling on top of him, they are not fast enough to prevent the neutralizer from being fired. 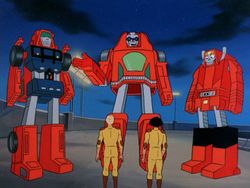 Back at the race, only Crasher, Greg and Don, and Rick and Billy remain in action. Determined to win, the bullies detonate a bomb they planted on Turbo before the race began, but the Guardian emerges from the blast totally unscathed, shocking the two cheaters so much that they swerve off the track and crash. Now it's down to Turbo and Crasher... and Crasher finds she's having so much fun racing that she's willing to wait until after she wins to finish off Turbo! Unfortunately for her, that's the moment the neutralizer beam hits the raceway, knocking out the spotlights. Turbo acts fast, firing up his headlights, but Crasher is too slow and doesn't see a sharp corner coming up in the dark. She goes flying off the track, while Greg, Don, and Turbo speed over the finish line—just as Leader-1 and Van Guard overpower Cy-Kill and destroy the neutralizer, lighting the speedway back up! After receiving their trophy, Don and Greg watch as Scooter restores Turbo's damaged systems, allowing him to finally transform and thank the shocked boys for saving him. The Guardians bid their new human friends farewell and take off in pursuit of the Renegades, who have fled in Thruster. 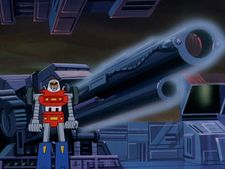 "One blast of the Electromagnetic Neutralizer and I can black out entire cities! No lights, no telephones, no communication whatsoever! Only I will have the power to restore electricity... and the bill will be huge!"

—Cy-Kill is all about the Benjamins

"Fancy running into you, Turbo!"

"When the lights go out at the speedway, there'll be uncontrollable panic. Crasher will be thrilled!" 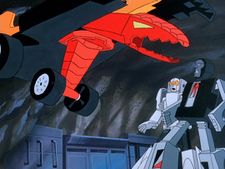 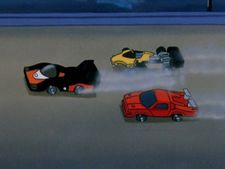 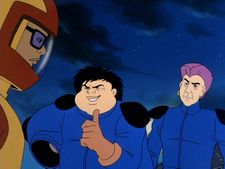 After losing the race, Rick and Bill moved to Angel Grove to start a new life.