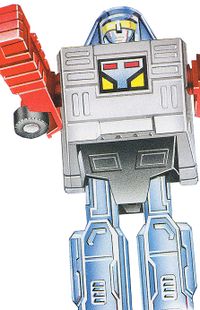 Block Head is one Renegade who really lives up to his name! Even among some of Cy-Kill's thicker subordinates, Block Head is easily the thickest. As bereft of intelligence as he is of culture, Block Head is still appreciated by Cy-Kill for being dumb enough not to question orders putting him in harm's way, and tough enough to survive the fallout.

Block Head was one of the team of Renegades - along with Psycho, Stinger, Stallion, Bad Boy and Spoiler - sent to GoBotron's Prison Moon by Cy-Kill to oversee to the disassembling of the captured Leader-1. A Guardian rescue team was unable to prevent their leader being taken apart but knocked out the crew operating the machine before Bad Boy and Block Head arrived. There was a brief stand-off as Bad Boy and Turbo exchanged barbs before an impatient Last Engineer blew both of the Renegades out of his way. The Fall of GoBotron Block Head and Bad Boy recovered enough to pilot a Thruster around GoBotron capturing stragglers; one that they took would later be converted into Pincher by Doctor Go. Flight to Earth 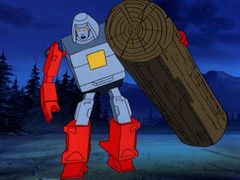 He was later put in charge of guarding the captured psychic Sean Roberts but despite being blind the boy easily evaded the lumbering Renegade and needed to be recaptured by Crasher. The Renegades then launched an attack on the Guardians to lure them to their lumber yard base, believing it will fulfil one of Sean's prophecies. When they arrived, Block Head played his part by burying Van Guard up to his neck in concrete. However the battle was distorted by Scooter's holograms and the Guardians were able to recover Sean and his mother, forcing the Renegades to retreat.The Seer He was with Cy-Kill when the Renegade was lured into a Guardian trap; both Block Head and fellow Renegade Geeper-Creeper ran off when their leader was captured.Escape from Elba Cy-Kill must have thought Block Head's lack of a mind was useful against psychics as he picked him again during the Renegades' attempt to capture Mira Shaw. Thanks to help from the treacherous Doctor Helstrom the Renegade was able to take Mira from her hotel room to their temporary base at a nearby fairground. Block Head was followed by the Guardians but this was all part of Cy-Kill's plans and both Leader-1 and Matt Hunter were captured in an ambush. The Renegades then attempted to escape on Loco but were forced to abandon their captives and escape by air after Turbo rammed the train off the tracks.Renegade Carnival

Block Head and Spoons got out the vote for Cy-Kill when he schemed to run for President of the United States. Their alternate modes and dispositions led them to address the working class Americans of Pittsburgh. Cy-Kill For President When Dr. Anya Turgenova was held hostage on Thruster during the Space Hawk project, Block Head and Tank failed to stop the wily Scooter and Tail Pipe from sneaking past them and freeing the scientist. The Hawks of Space Part 2 Block Head and the Renegades invaded UNECOM to capture a sample of the new element, Scootonium. The Scootonium Scenario

From Axiom Nexus, Cy-Kill remarked on Block Head's dull usefulness. He mused Block Head would be a good moderating influence on his new Renegade, the unpredictable Odd Ball. Renegade Rhetoric 2015/10/16 After Project: Nemesis produced a new Power Warrior for the Renegades, Block Head, Loco, BuggyMan, and Decker Decker tried out the upgraded Power Suits at Cy-Kill's request. Combiner Wars Part 1 In the future era of 2085, Block Head and Destroyer stood guard at the peaceful Renegade Embassy on Gobotron. All Tomorrow's Utopias 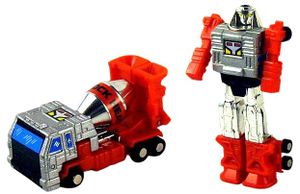 Block Head was released by Tonka in the second series of GoBots, and converts from robot to Nissan Diesel cement mixer truck in 9 steps. The toy was a repackaging of Mixer Robo from Machine Robo, with no significant changes beyond the "Mixer Robo" sticker being changed to read "Block Head" and the omission of the extra window stickers issued with the Japanese version. Initially designed by Bandai for the Machine Robo line, the figure was unreleased until the prototype was used by Tonka. For a small figure Block Head has an unusual and satisfying transformation, with most of his vehicle mode parts folding away in a very neat fashion. The cement mixer's drum can turn in vehicle mode, though Block Head's face is visible on the underside. This does at least mean the figure's head can turn in robot mode, a rarity for figures of this size and era.