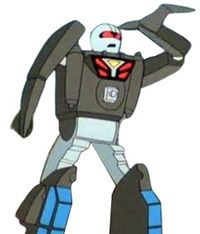 "Wrong way, Wrong Way!" A cry often heard by Guardians in the middle of a battle. Wrong Way is as friendly as most Guardians, but his sense of direction leaves much to be desired. Often times he takes off in the exact opposite direction of his intended destination, whether he's supposed to be advancing or retreating from the enemy. Still, he seems good natured about his confusion and is still somewhat of a skilled fighter, which can surprise his Renegade opponents.

He is sometimes known by the less funny name of Sky Gun.

Wrong Way helped to defend GoBotron from invasion by Cy-Kill and the Master Renegade. However the Command Center he was piloting with Path Finder was shot down in flames and when Wrong Way tried to escape in helicopter mode he himself was shot down, even after he belatedly started flying in the right direction. The Fall of GoBotron With an injured arm, Wrong Way was captured and placed onboard a damaged Command Center with other Guardian prisoners, awaiting transport to the Prison Moon where they would be put into the Disassembler. Twin Spin prevented Rest-Q from treating his wounds but Wrong Way was released when Scooter and Sparky were able to trick the Renegade guards into abandoning ship. Flight to Earth 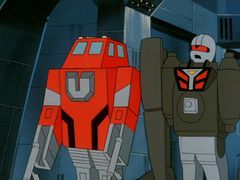 He was later assigned to guard an industrial moon with Staks, but they fled in the face of Al-Vanar's massive fleet - with Wrong Way initially heading towards the threat, needing prompting from Staks as to the direction of GoBotron. Renegade Alliance Wrong Way was on Earth when the Guardians discovered a secret base manned by Tank, Geeper-Creeper, Screw Head and BuggyMan. He carried out an aerial assault in conjunction with Leader-1 but nearly collided with his fellow Guardian. Nevertheless the base was destroyed but the Renegades then vanished. Cy-Kill soon appeared and offered to begin peace talks - though Wrong Way was unaware of this as he was facing in a different direction.Pacific Overtures Wrong Way was later part of the security force gathered by Zeemon to oversee the transfer of the captured Fitor from the Command Center.Fitor to the Finish 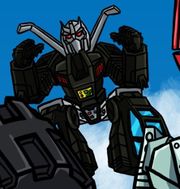 During the Diaspora, Wrong Way was dispatched to Level 51 along with an assortment of Guardians and Renegades. Cultural Appropriation

On one occasion, the Renegades challenged the Guardians to a game of basketball for the fate of the Earth, and Cy-Kill naturally cheated. Using a telepathic chip, he could direct Naismith radiation to move the ball at will. When the Guardians realized what was doing on, Leader-1 summoned Wrong Way and Spy-Eye via Astro-Beam to shut down the problem. They infiltrated Thruster and caught Doctor Go in the act. The Guardians forced the diminutive scientist to spill, and they destroyed the Naismith generator. Double Dribble When Cy-Kill attempted to reassemble his Puzzler combiner, the Guardians fought to keep the Renegades cars separate throughout Philadelphia. Wrong Way led a squad to contain Rube and Zig Zag. Although Zig Zag got away, the Guardians managed to contain Rube, leaving Puzzler incapable of fully forming. Six Heads are Better than One

When the Autobot Spy Changers first arrived on Strata 22, Turbo mistakenly assumed they were Renegades. Wrong Way was one of the Guardians he assembled to attack and capture the Spy Changers. Brain Problem Situation

As Sideways and Gong played with mixing universal streams, the Decepticons staged an all-out assault on Guardian City on Earth. Wrong Way was caught by Thrust and thrown into a turbine. Echoes and Fragments 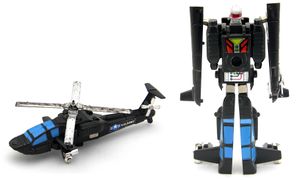 Wrong Way was released by Tonka in the second series of GoBots, and converts from robot to Hughes AH-64 Apache helicopter in 10 steps. The toy was a repackaging of Apache Robo from Machine Robo, with no significant changes but omitting the extra sticker sheet of the Japanese release - which had a couple of minor detail additions for either mode. The rocket pods for the copter are detachable for some versions of the toy, but not on others - this was possibly an assembly error where some batches didn't have the parts glued in place. Beyond the perennial helicopter-with-removable-blades-that-can-get-lost thing Wrong Way has two other weak spots - the button on the tab to raise his head and the flip-down panel that makes his robot mode chest can both come loose easily. While either can be popped back on easily it does mean these parts can be missing from loose examples. The blades don't really have anywhere to go in robot mode, though they can be left in position on the chest if so desired - a configuration that was used for the GoBots card art but not the instructions.

An unchanged Wrong Way was included one of Tonka's Guardian Gift Pack #2 sets, with unchanged versions of Rest-Q and Heat Seeker.

An unchanged Wrong Way was also included one of Tonka's Guardian Gift Pack #1 sets, with similarly unchanged versions of Rest-Q and this time Major Mo. It is hard to tell if this makes him really popular or really unpopular.

The European release had no changes from the Japanese version of the figure, including the extra sticker sheet, but was named Sky Gun. The toy was sometimes listed as "Sky-Gun" in catalogues. Why exactly Bandai chose to change the toy's name when they had otherwise shifted to using the GoBots character names is unknown; one possibility is it was a working name for the figure, though it could be for any number of other reasons.

The fifth toy from the fourth wave of figures, Apache Copter Man was released by Bandai Australia in 1984. While identical in design to the original Apache Robo toy, he received a deco based on the figure's prototype; olive green with dark blue canopy and black visor. Apache Copter Man was packaged on a blue backing card.

Later in 1984, the figure was re-released with his GoBots name and faction on a new black backing card depicting a yellow-tinted alien landscape. A running change in 1985 saw the figure replaced with its more common black variant.

Later in 1984, the figure was re-released with his GoBots name and faction on a new black backing card depicting a yellow-tinted alien landscape. A running change in 1985 saw the figure replaced with its more common black variant.

The figure was reissued by Bandai in Europe during 1993 as part of the second series of Robo Machines, with the 'US Army' stickers updated to say 'RM Army'. For trademark reasons the figure was renamed simply Helicopter I in the British market, with localised versions of the name used in other markets - aside from in Italy, where the Robo Machine name Sky Gun was retained. Sadly, like most of the Robo Machines figures, Helicopter I uses poor quality materials and suffers from mould degradation. It also omitted the button for the lever that raises the robot's head. On the plus side, it means there are more rotors out there...