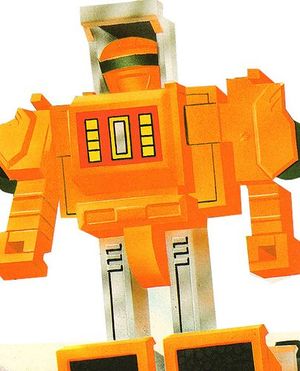 The dependable Dumper transforms into a dump truck. He takes his sometimes thankless assignments in his stride, knowing that he's strong enough to handle the workload and resolute in his desire to destroy the Renegades.

His twin brother is Pumper.

Dumper formed part of a detective team for the Security Force on GoBotron with his twin brother Pumper. When the Renegades escaped imprisonment and began a rampage on Earth, Leader-1 took the brothers along with Dozer, Turbo and Hans-Cuff to stop them. The Renegades were briefly stymied by computer interference caused by the humans Pete and Nancy. Dumper was sent to collect the pair before the Renegades captured them but he was too late - BuggyMan had got there first. Dumper gave chase and called Leader-1 for backup. The resulting battle sent the Renegades into retreat, and the Guardians introduced themselves to their new human friends in the Command Center afterwards. Escape to Planet Earth

Dumper, Scratch, Road Ranger, and Dozer arrived to back up Leader-1, Blaster and Turbo when Cy-Kill's Renegades attacked a UNECOM facility in Utah. Dumper converted to robot mode and began firing on the surrounded Renegades. They managed to keep the evil GoBots on the ropes until Professor Von Joy's experimental immobilizing weapon backfired on the Guardians and allowed the unharmed Renegades to escape. It's the Thought that Counts

Driven by Matt Hunter, Dumper made a timely appearance at an observatory just in time to save the scientists gathered outside from getting ran over by Crasher. He battled the Renegade, chasing her off with his firepower and strength. Collision Course Comet

Dumper was present on Earth onboard the Command Centre when Cy-Kill tried to collect Magma Worms from South America to use against the Guardians. Along with Dozer he excavated the volcano containing the worms, allowing Leader-1 to fire his power beam into the volcano, triggering an eruption and scuppering the Renegades' plans to harvest the dangerous creatures. The Rumbling Jungle He was out on patrol when Doctor Braxis and the Renegades attempted and ultimately failed to kidnap Anya Turgenova. The Aliens Steal a Scientist After Cop-Tur attacked Dumper and Dozer, freezing them in vehicle modes with Braxis' freeze beam as part of a convoluted plan to control Earth's weather. Scooter was able to find the reversal key and the Guardians stormed the Renegades' quarry base, with Dumper and Dozer burying Crasher under boulders when she tried to flee to Thruster. Battle of the Beams Again paired with Dozer, Dumper was dispatched to Peking, where Geeper-Creeper was trying to release one of the Exploding Toads of Primus. Dumper wrestled with the Renegade while Dozer grabbed the toad and flew to safety. The Exploding Toads of Primus During a long pitched mountain battle with the Renegades, Dumper was damaged and had to be fitted with a new wheel by Nick onboard the Command Centre. Cy-Kill attacked the ship, causing Dumper to fall on Nick - sadly leaving the boy merely unconscious. This meant Dumper was unable to rejoin the battle, but Scooter took a huge overdose which logically made him gigantic, chasing the Renegades away. Scooter Strides Out

Dumper was assigned to the Guardians' Earth Force when Cy-Kill began to build Zod. Along with Dozer he helped to bury their abandoned base in an abandoned mine. The Secret of Silvermoon Mine He later helped drive off an attack from the Monster GoBots The Monsters and Mister Grogan and later - again with Dozer - collected the concrete used to temporarily bury them in an abandoned quarry, the pair pouring seven thousand tons on the creatures after Heat Seeker led the trio into the Guardians' trap. Captain Clegg's Dream Dumper later manned one of the Battle Suit's legs as the Guardians used Professor Von Joy's new invention to battle the Renegades, using his section's rocket launchers to shoot down Cop-Tur. The Capture of Comrade Boris He later helped foil a serpentine Renegade plot to capture the Battle Suit system. Walter Wilson's Millions He was among the Guardians that combatted Cy-Kill's huge army of Renegades at Mauna Mauna, where he and Dozer again buried Crasher under rocks. The Battle at the End of the Earth

Dumper was one of the Friendly Machine Men native to Earth when it was targeted by the Enemy Machine Men of Robotron, led by Cy-Kill. Despite Leader-1 devising robot modes for the Machine Men the first attack was a rout, though Dumper was among those who regrouped at the Command Centre and prepared for a counter-offensive. Space Wars 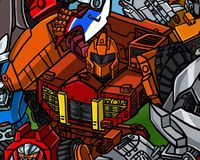 Fleeing the Cataclysm, Dumper hopped dimensions with some other GoBots and wound up on Level 11. Cultural Appropriation

Dumper, Pumper, and Bullseye were stationed aboard a Command Center when Cy-Kill attacked them as part of an elaborate ruse. They managed to capture the Renegade overlord, but only because he planned it in order to infiltrate the Prison Moon. The Long Game Dumper and Night Ranger were guarding a storage facility on Gobotron when Heart Attack and Clutch blasted them and stole the Positronic Animus devices from inside the warehouse. Six Heads are Better than One

In an unstable hybrid universe that incorporated both GoBots and Transformers, Dumper was aboard a Guardian shuttle bound for Earth when Megatron attacked and hijacked the ship. He was injured and left for dead in the wreckage of the shuttle. (Dumper only suffered this fate retroactively due to the machinations of Sideways and Gong. When the events actually took place in this hybrid timeline, it was an Autobot crew who were attacked by Renegades. When the factions flipped, Dumper essentially took the place of Ironhide, whom Cy-Kill had spared when capturing the shuttle.) Echoes and Fragments 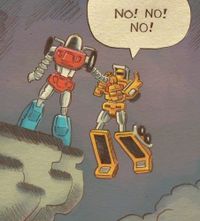 When Cy-Kill led a Go-Bot uprising against the human creators, Dumper was one of the robots to side with Leader-1's loyalist faction. Issue 2 Many, many years later he was captured by Cy-Kill. Dumper pleaded with the Renegade, who assured him it had nothing personal before feeding him to Zod, ensuring the monster's loyalty. Issue 3 It probably felt personal. 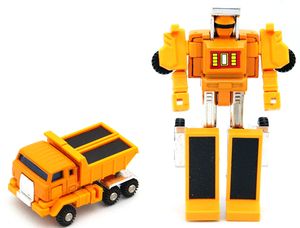 Dumper was released by Tonka in the first series of GoBots, and converts from robot to dumper truck in 4 steps. The toy was a repackaging of Dump Robo from Machine Robo, with no significant changes aside from the omission of the extra sticker sheet included in the Japanese version. The figure features reasonable shoulder articulation but the chrome around the helmet can wear, meaning Dumper's head can be slip down inside his chest on worn examples. In a cute touch the black plastic in the rear of the dumper truck is slightly textured, as if it's coal. The grille features the word "POPY" in relief; this is in reference to the company that designed the figure.

A carded repackage of Dump Robo, the figure now simply known as Truck was released by Bandai Europe at the end of of 1983, including the additional sticker sheet. It was also the second figure to be packaged on a new blue and purple backing card. While promotional material would later refer to the figure by its' GoBots name, the toy's packaging was never updated.

The second toy from the second wave of figures, Truck Man was released by Bandai Australia in 1983. He remained identical to the original Dump Robo toy, albeit packaged on a blue backing card. 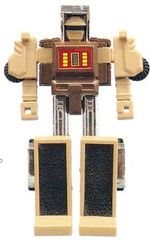