The Robo Machines was a comic serial by Fleetway Publications based on the Robo Machine toyline. It told the story of Stron-Domez and his Renegade Robo Machines, who fled from Robotron after an unsuccessful attempt to assassinate the planet's president and instead opted to conquer Earth. They were followed by Ex-El and the Security Forces

The serial was published in 3-page episodes in the Eagle and was originally published between 10 November, 1984 and 29 July, 1985. While the story had no titles, fans have long divided it into two unnamed story arcs, either side of a one-week publishing break when Eagle was reorganising itself following a merger with fellow comic Tiger, which also fits the rhythms of the strip nicely. 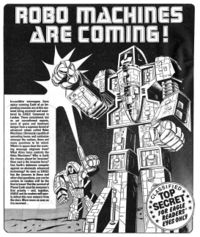 The story takes elements from the familiar GoBots mythos, notably the rough factions and names of most character names. It had a grittier feeling more in line with the war comics and the like prevalent in the British weekly comics of the period. Between the first and second stories the serial took a break and when it returned some of the original characters and concepts that didn't gel with Gobots were reduced or ignored - the term Guardians started to replace Security Forces, Turbo and Scooter were added to the cast, Stron-Domez became Zod and Ex-El simply disappeared from the story.

The story is still the high point in exposure for some of the cast, notably Hans-Cuff and Night Ranger.

The strip was written and drawn by largely by a crew of Fleetway veterans. Tom Tully wrote every script. Mario Capaldi initially drew the strip but after six episodes he was replaced by Kim Raymond, who stayed with the strip to its' conclusion - aside from one episode, which was drawn by a young Geoff Senior.