A New Suit for Leader-1

The clothes make the man, and the Power Suit makes a Renegade! 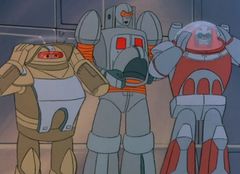 Cy-Kill, Crasher and Cop-Tur attempt to raid a silicon warehouse on Earth but are attacked by Leader-1, Turbo and Scooter. They still get away with some materials but Cy-Kill is tired of his constant defeats to the Guardians. Crasher wishes he was on their side and that gives Cy-Kill an idea, and he begins plotting to get Leader-1 on the side of the Renegades. Fitor suggests that the engineers of the planet Fabricon might be of some help. While there and looking at the planet's exosuits, Dr. Go strikes upon the idea of building one that would control Leader-1, made in the shape of his Power Suit to fool the Guardian into wearing it. Cy-Kill puts him to work on Fabricon. Meanwhile on Earth Leader-1 is asked for an interview by KBLB National News, and says his main hope is just to stop the Renegades. On Fabricon the suit is complete - an exact replica (sic) of Leader-1's Power Suit that will invert the wearer's personality, and can only be removed with a Photon Key. Onboard the Command Center the Guardians pick up a distress call - a meteor shower has entered the Earth's atmosphere and is heading towards Sydney. Leader-1 and Turbo deal with it easily but it was actually set up by the Renegades to cover for Dr. Go to switch the Power Suits over. Fitor then sends a huge meteor towards the planet; as Cy-Kill had hoped Leader-1 realises they will need the Power Suits to deal with it. However, this means Dr. Go is unable to take Leader-1's real Power Suit, instead having to stash it in a storage lock. He gets outside and tells Cy-Kill the inverting Suit is in place. 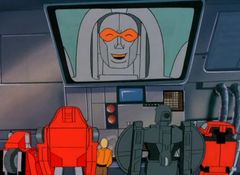 The Guardians suit up but Leader-1 rapidly realises something is wrong with his; however, he is unable to remove it before his personality inverts. He insults Turbo and Scooter, but they have no time to find out what's wrong and head off to stop the meteor. They take care of the problem but when they returned there's no sign of Leader-1 - who has gone to see Cy-Kill on Roguestar. He fobs off a radio message from A.J., telling her he is on a secret mission. The next day he attends a UNECOM AIL conference where a new powerful computer transmitter is being unveiled, but he simply takes the transmitter chip, taking it to Cy-Kill and telling the Renegades this is just the beginning of their mission to conquer GoBotron. They enter UNECOM's digital components warehouse, where Leader-1 has Dr. Go copy data core modules on GoBotron's security. Meanwhile Zeemon and Path Finder arrive on Earth by Astrobeam, who inform Turbo that Leader-1 has been declared a Renegade by the Guardian Council. At that moment Matt answers an alarm from the warehouse - and Leader-1 taunts the Guardians. They try to stop the theft at the warehouse; Path Finder blasts Cop-Tur, whose stray blades then take out Cy-Kill. Leader-1 gathers them all up and leaves on Thruster. 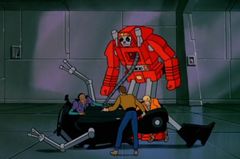 Cy-Kill is repaired by Fitor on Roguestar but Leader-1 takes command of the Renegades. He laughs off Cy-Kill's attempts to attack him and has Fitor imprison his old rival. Leader-1 then rigs the AIL circuitry to go past GoBotron's defences undetected, needing just the Command Center to complete his plan. On Earth the Guardians are nervous about the forthcoming attack when Cy-Kill suddenly appears in the Command Center. Path Finder shoots him but he insists he hasn't come to fight, warning them of the planned taking of the Command Center before showing them the Photon key and the location of the real Power Suit. Cy-Kill then vanishes as Leader-1 approaches the Command Center - which is actually a hologram. The Guardians have tricked Leader-1 into a containment cell and freeze him with liquid nitrogen. Turbo then uses the key to release Leader-1 from the suit. He is next seen marching the captured Guardians and humans to the Renegades. Cy-Kill and Fitor are furious at the failure and are held at gunpoint by Cop-Tur, Crasher and Dr. Go. However, the whole thing is a ploy - Leader-1 releases the "prisoners", allowing Turbo to blast Crasher, Path Finder to gun down Cop-Tur again and Matt, A.J. and Nick to pin down Dr. Go - allowing Scooter to recover the stolen data on GoBotron. Leader-1 then takes care of Cy-Kill and Fitor. The Renegades are then imprisoned but swiftly escape and are able to frustrate the Guardians' attempt to capture Roguestar by ejecting the ship's control compartment. Cy-Kill is back in charge, and tells Crasher, Cop-Tur and Dr. Go he has plans for them after their treachery. 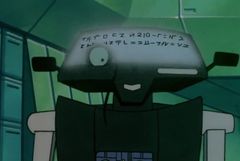 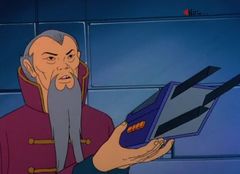 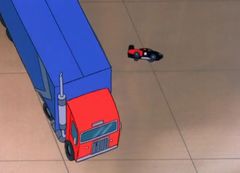